Reflections on Trudeau’s Revolution in Ottawa

May the people show him the mercy he denies them. 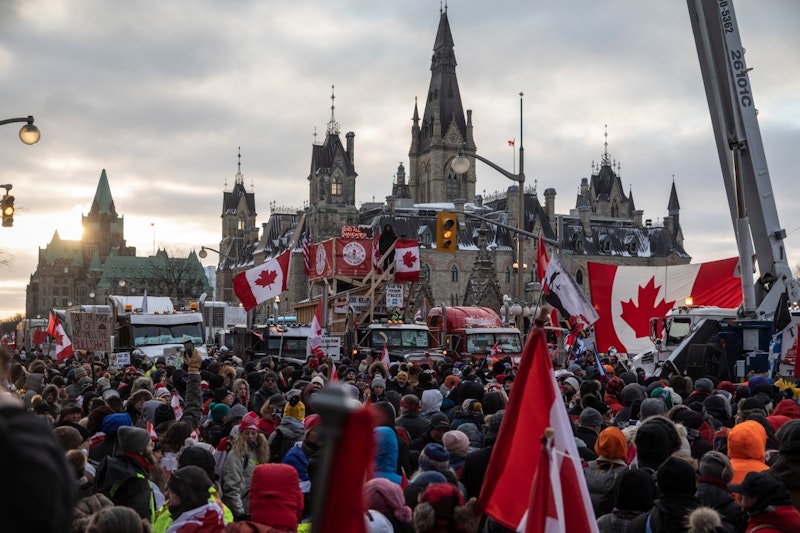 What does Justin Trudeau see from the main house of his country estate or from his seat inside the House of Commons?

Perhaps he sees flames dancing among the treetops instead of ice and snow covering the black ash and trembling aspen trees outside Parliament Hill. Perhaps he sees Los Angeles in April and Chicago in May, the two burning as one, with mayhem at the intersection of Florence and Normandie and a massacre at Haymarket Square. Perhaps he sees the first day of the 1992 Los Angeles riots as an opening ceremony, and the fourth of May 1886 as his chance to answer a mayday call with an attack on the workers who honor May Day.

Perhaps it’s time to stop conjecturing about what Trudeau says he sees, before the emergency he cites—and the month-long Emergencies Act he invokes—becomes a sight too gruesome to behold.

Someone needs to tell Trudeau that the attack on Reginald Denny, a former truck driver, isn’t an LAPD training video on crowd control. The video should have a Parental Advisory label, and Trudeau shouldn’t watch the video without adult supervision, because he may order the police to act like the four criminals in the video: treating all the protesters in the Freedom Convoy as one; as a Christian like Denny, regardless of faith, whose fate he holds—whose life he’d betray—without remorse.

Before Trudeau tries to repeat history and imitate art, before he orders the cavalry to remake Calvary in his own image, he should see the faces in the convoy.

He should see the images of Denny bleeding in the street and of four Good Samaritans, including a fellow trucker, driving Denny—in Denny’s truck—from the scene.

He should see the CT images of Denny’s crumpled skull in which the fractures look like fault lines, bearing in mind that the crater in Denny’s forehead isn’t the result of an act of nature but of men acting like brutes in a state of nature: that the acts are a series of assaults on Denny, culminating in a gang member doing a victory dance after throwing a cinder block at Denny’s head.

Trudeau has a duty to see these things, so he may not misrepresent the facts or misinterpret art as a license to commit arson.

He sees what he wants, superimposing his cowardice on one man’s portrait of courage and another’s source of inspiration, for Trudeau’s political survival hinges on a tale of two paintings; of Richard Eurich’s “Withdrawal of Dunkirk” and Ed Ruscha’s “Los Angeles County Museum on Fire.”

The latter’s an aerial perspective of an imaginary fire, where process destroys progress and chaos defeats the illusion of control, because the building in the painting—with its breeze blocks and concrete colonnades—is a model of conflict.

Streaks of graphite and steel wool stain the canvas, creating swirls of black smoke, while shades of orange and yellow color the background toxic.

Trudeau would have us believe the fire’s real, so as to justify his aggrandizement of power and war on freedom.

He sees himself as the savior of Canada, more sovereign than the Queen of Canada and Canada’s Head of State, with the people in his sights.

He sees himself in the virtual cockpit of a Spitfire, gliding beside the musicality of time and the sound of immortality, when in fact he’s deaf to the noise of democracy and the judgment of history.

Blind to the obvious, Trudeau has no patience for reason or reason to stop his collision with reality.

May the people show him the mercy he denies them.