Who Will Block the Roads?

The Super Bowl was supposed to have big trailers. 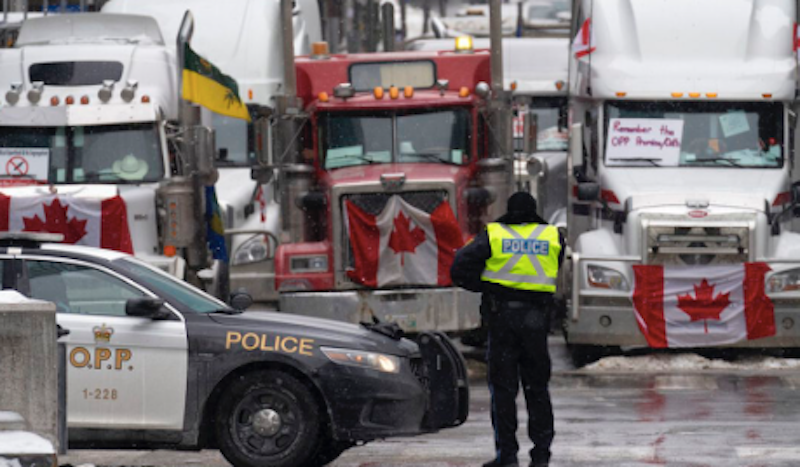 With his strong libertarian streak, Sen. Rand Paul is arguably the only good U.S. senator, but he shouldn’t have encouraged regulation-protesting truckers to “clog things up” on L.A. or DC roads, as he did prior to the Super Bowl.

Even a good cause shouldn’t resort to using bad methods. In fact, the best legal and moral systems let you pursue whatever causes you like—so long as you stick to voluntary methods instead of, say, kidnapping your neighbors and making them instead of you do all the work for the cause.

Property rights create a nice, clear boundary between you (along with your pet causes) and whatever crazy causes your neighbors want to pursue. But in a society where some things are considered “public property,” remain an unsettled commons, or are managed by the government—whether rightly or wrongly—caution is called for. Public property, whether you love it or want eventually to eradicate it, is a gray area where individuals’ preferences can easily be overwhelmed by the actions of the mob, but they shouldn’t be.

Where there are no property rights to enforce civility, individual restraint and self-control should prevail. We don’t want a population of people waiting for the first ambiguous opportunity to run amok. So it is that we expect certain things to be treated as effectively “neutral ground,” not the place to spark, or settle, a conflict. Roads are for traveling, not for hundred-person brawls, just as the middle of the public sidewalk isn’t the place to build your dream house.

That means roads also aren’t the place to block innocent third parties over your disagreement with regulators, much as I may share your dislike of regulators.

It’s wrong when Black Lives Matter protestors circle innocent motorists and trap them in place until they somehow atone for the history of slavery, Jim Crow, and police brutality, and it’s wrong for truckers to physically block motorists—whether on their way to a neighboring city to trade, to a hospital to get treatment, or just to an intriguing nearby hill—merely because those truckers have a beef, no matter how legitimate, with Big Pharma, trucking companies, Canadian regulators, or anyone else who isn’t that innocent motorist trying to move down the street.

Some of the same right-wingers who support the trucker blockades that have happened in Ottawa and Europe claim to understand not only the dangers of letting BLM blockade traffic but the broader principle of avoiding partisan attacks that undermine the usefulness of networks meant to serve a broad array of participants with different views. After all, that’s the gist of the argument (often a sound moral one even when it carries no legal weight) against letting ostensibly-neutral institutions such as social media sites, banks, and phone companies turn around and become content-policing censors, like a referee suddenly turned aggressive player.

Let people talk, and let people drive. You know that’s a shorter route to freedom than letting people hold their fellow users hostage to send a message, whether the message is “Fewer mandates,” “Puerto Rican statehood now,” or anything else. You can still pursue countless other tactics for sending such messages. There are many places to drive or park an immense convoy, for instance. In fact, if you want to lose support for your cause, harming or inconveniencing innocent third parties is probably the fastest way to do it.

Burn down enough buildings, for instance, and most people start thinking police brutality might not be such a bad thing after all.

Most people stop caring what the terrorist, hostage-taker, bullhorn-wielding loudmouth, or speech-interrupting heckler is pushing and just hope to see him pushed offstage. I’d think people would by now have learned that lesson, one that’s both conservative and liberal but apparently these days not suitably right-wing or left-wing, if you follow my nuanced lingo.

But it’s not just the lone activist interloper who ought to keep that reverse-psychological principle in mind. The people in charge, and those egging them on, should use “neutral” institutions for partisan ends as little as possible. To varying degrees, it’s terrible when a parks commission refuses a grant to a theater performance because they consider the play too conservative, terrible when the New Right schemes to use strict fire and building codes to report ramshackle artist communes, terrible when social media sites stealthily de-boost users whose politics they dislike, and terrible when a local zoning board decides it won’t grant construction permits to odd religious orders.

Mind you, I’m an anarcho-capitalist and would be delighted if there were no public roads at all, just a universe of private property (especially if we all recognized a legal right-to-safe-passage that contributed to efficient roads placement and compensatory toll-taking in the event voluntary land sales alone didn’t take care of it, but those details aren’t important at the moment). While public roads exist, though, I don’t want them used to settle culture wars, gender spats, regulatory disagreements, race scandals, or anything except how best to get from geographic point A to point B.

I don’t pretend that a clear and easy definition of “censorship” is at hand for cases that blend the public and private sector—as when New York City mayor Eric Adams recently called on Big Tech to censor the aggressive-sounding music called “drill rap.” But I know that when in doubt, I’d rather leave individuals free to make their own listening choices, presumably still the obvious libertarian default position. And surely real liberty-lovers want innocent individuals to be able to drive without having to worry about who’s pissed off about what this week.

There are a thousand other ways to make your displeasure at that Trudeau dweeb known without becoming an even bigger obstacle to everyday life than he is.