Radicals in Power Judge the Radicals Outside

J6 can’t do the damage the Fed, the other BLM, and spending bills do. 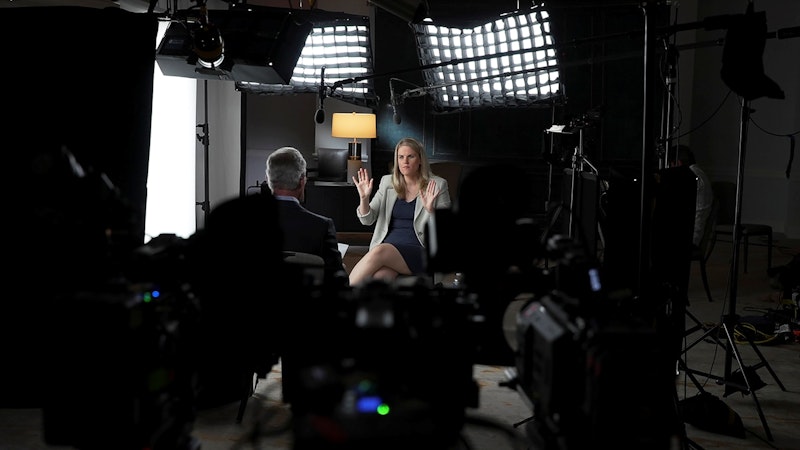 I hope Facebook isn’t down as I type this on Monday because it’s tweaking the site to cater to the desires of whining former employee Frances Haugen.

Haugen is the “whistleblower” (revealing nothing shocking) who copied some 10,000 internal Facebook documents suggesting their algorithms aren’t preventing every bit of hate and radical sentiment from being posted or flagged on the site. She appeared on 60 Minutes this week and hopes to make her case for a regulatory crackdown in front of Congress soon. Yet her complaints could as easily be applied to phone companies, or even the producers of pens and paper. Did you know hateful people can write books? And books are sold in ordinary shopping malls!

When did we start believing companies can eliminate “hate”? Activists like Haugen and journalists like the 60 Minutes staff don’t even bother to define it anymore, as if we all now know hate when we see it—as if it were an objective substance to scrape off like mold or rust. She laments that Facebook’s documents show it’s stopping no more than “3 to 5% of hate” and “6/10 of 1% of violence.” What does that mean? Precisely how many units of hate are there in the culture—and are none of them directed at deserving targets? Are we still allowed to hate Jar-Jar Binks? Justin Bieber?

One of the reasons you should counter text you dislike with text you do like is that that process in itself furthers intelligent and peaceful discourse, whereas erasing things merely fosters a power struggle to see who controls the eraser. Then, in the current climate, critics like Haugen grasp their pearls and charge that you aren’t using your eraser often enough. She might as well have shrieked “Rule me!“ at the climax of the 60 Minutes piece, as if a government were paying her to show the populace what eager servility looks like.

Naturally, she calls the January 6 Capitol incursion an “insurrection,” not merely a protest or a ruckus, and she thinks her former employers should’ve prevented it. She thinks failure to use its profitable algorithms to decrease partisan conflict after the 2020 election prioritized “growth over democracy” and fostered J6. Maybe. Likewise, letting bookstores sell political books may give some people kooky ideas. Some risks like that are worth suffering. We survived decades of uncensored telephone conversations. Many of those phone calls were probably made by racists! We survived centuries of gathering in meeting halls. Sometimes things got rowdy. We endure.

Do the Haugens of the world wish those (mostly) unmonitored meetings had never occurred? Will they start recommending video monitoring of dinner table conversations next, like something out of the old Soviet Bloc? Could you get a big “J6” tattoo without legal ramifications these days? (How about if you combined it with a COVID passport tattoo?)

One reason the current pro-censorship push alarms is that you know that like all censorship it’ll end up directed at the outsiders and the out-of-power rather than at the authorities themselves, though they’re the real dangers.

Take the Federal Reserve. News has broken of the Fed vice chair having engaged in large, fishy stock trades the day before the official announcement of a pandemic, which he likely knew was coming. Shortly before this revelation, the presidents of both the Boston federal reserve and the Dallas federal reserve, Eric Rosengren and Robert Kaplan, respectively, resigned over insider-trading-type allegations. Some of us haven’t forgotten the trillions the fed funneled to select overseas banks in the wake of the 2008 financial crisis, either, but the assumption “They must know what they’re doing” continues to dominate reactions to both the public and private sectors in the U.S., for now.

Help isn’t forthcoming from inside government itself, either, with opportunists like Sen. Elizabeth Warren only making matters worse (and more brazenly politicized) by huffing that the Fed chairman and the majority of the Fed board is Republican, as if lowly partisan politics could begin to explain the arcane, technical fiscal wrongs of the Fed elite. End the Fed and there will be no need to tote up which party produced most of its board members.

Meanwhile, experts like Treasury Secretary Janet Yellen call for the elimination of the debt ceiling, as if that won’t just lead to her cronies in government spending even more radically and irresponsibly. And now Biden picks Tracy Stone-Manning, who was involved in 1980s terrorist tree-spiking operations with the group Earth First!, to run the Bureau of Land Management, as if she’s not a radical whose dangerous ideas might spread via social media (and official government pronouncements).

But it’s a safe bet the Haugens have no interest in silencing the Yellens, Warrens, or Fed board members of this world. No, it’s a few scruffy camouflage-wearing Trump fans herded with ease by paid FBI informants that we have to worry about. They might be talking to each other! Watch out, they might start using telegraphs or smoke signals! When will trustworthies such as Congress crack down for all our sakes and the good of the regime?

And while we wait nervously for those rebellious elements to be crushed, don’t worry at all about whether you’ll be harmed by the $1 trillion “infrastructure” bill or the $3.5 trillion “reconciliation” bill that the Democrats are torn between in debates on the Hill right now (the already existing $29 trillion federal debt notwithstanding). The important thing is that they can debate such thievery without interruption by rowdies who use Facebook. The republic is safe!

Biden, for his part, warns that if neither bills passes, it will embolden the same forces who orchestrated J6 and who now object to raising the debt ceiling. Some left/liberals warn that since the Supreme Court may contain J6 sympathizers such as Justice Alito, even that institution may be a subversive threat to the ongoing spending and planning that our brilliant president and industrious Congress envision. Meanwhile, activists and mainstream journalists alike have begun questioning whether figures such as Sen. Kyrsten Sinema, who would prefer the (somewhat) smaller spending plan, should be referred to by the press as “moderates,” which might create the false impression they’re sensible or even correct. Call them instead (vile) “corporate Democrats,” one wonk suggests.

Let’s hope that new term is not deemed “hate” speech by a Haugenized Facebook and banned, though. That could imperil the establishment Democrat agenda!