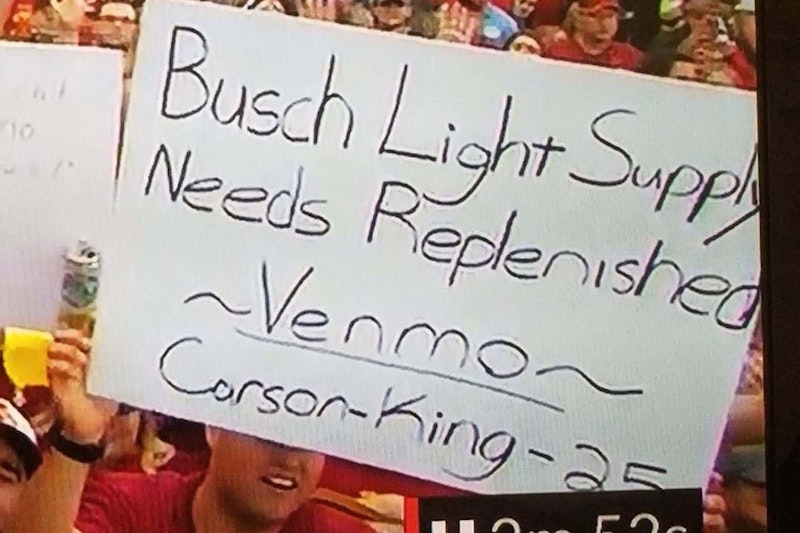 An ESPN camera caught an Iowa St. football fan displaying a joke sign reading “BUSCH LIGHT SUPPLY NEEDS REPLENISHED," along with his Venmo name. Money poured in, especially after Carson King, 24, announced he'd donate it all to a local children's hospital and Anheuser-Busch agreed to match all donations. Other firms chipped in as well, bringing the fundraising total to over $1 million.

It was momentarily one of the feel-good stories of the year, but The Des Moines Register did what you do now when you want to take someone down—it combed his Twitter feed for dirt. Sure enough, it struck "gold" with a couple of bad tweets by King when he was 16. The Iowa newspaper rewarded a do-gooder who chose to help sick children out by shaming him nationally.

The Register had Aaron Calvin check out the unlikely philanthropist's Twitter timeline when he became news, and the reporter found two offensive tweets—apparently referencing the comedy show Tosh.0—from when King was a high school junior: "One comparing black mothers to gorillas and another making light of black people killed in the Holocaust."

It appears that King was merely quoting the nationally syndicated show's host, comedian Daniel Tosh, but we have no way of knowing, as the Register declined to print the tweets verbatim.

Calvin contacted a remorseful King, who decided to call a press conference to apologize. The gig was up. Anheuser-Busch, which had been selling six-packs with King's likeness and "Iowa Legend" on the cans, severed ties with him in the cold, calculating manner in which corporations protect their brands. The heartwarming story turned into a tragedy/cautionary tale overnight. In the current vicious political and cultural climate, no good deed goes unpunished.

The Register said Aaron Calvin did a "routine background check" on King in preparation for a profile it was doing on him. Anyone who suddenly gets famous for doing a good deed, or for doing anything, can expect the same unwarranted invasiveness, going all the way back to their teen years. If the media doesn't do it, some "well-intentioned" online sleuth will, all in the name of "justice." Raising a bunch of money for sick kids or how old you were at the time doesn't get you a pass—nothing does, because there are no rules.

Why did only the bad tweets from the bogus background check make it into the Register article? That's shoddy reporting. If the newspaper feels that it's required by some imaginary journalistic code to dish eight-year-old dirt on a private citizen who didn't seek fame, then it also has an obligation to print King's tweet from three years ago: "Until we as a people learn that racism and hate are learned behaviors, we won’t get rid of it. Tolerance towards others is the first step.”

Those progressive-sounding words, which didn't make it into the story, obviously define who King currently is as a person much more than his two high school tweets did, but Cancel Culture doesn't award any points for providing nuance. It's a blunt instrument, and scoring points is all that counts. Who you score on or how you do it doesn't matter.

Calvin's no longer with the Register because his own troublesome Twitter history subsequently came to light. By the time his article came out, King had already held his press conference, so the cat was already out of the bag. Does that get the Register off the hook? Since it ran a detailed "background check" on an accidentally famous individual, the answer is no. King was raising money for sick kids, not running for office or applying for a high-profile job. He didn't need to pass the media's test to be allowed to carry on with his philanthropy.

Here's a radical suggestion for the media: If you incorrectly feel it's your obligation to heavily vet a good Samaritan and find something inappropriate on social media from his youth that reflects in no way on his fundraising, give him the option of deleting it.

To those who'd make a stink about this being a breach of journalistic ethics, I'd ask what ethical code of journalism justifies cherry-picking two bad tweets someone made as a minor that you say suggest someone's a racist, while leaving out the later tweet that shows unequivocally that he opposed racism? The media has no professional obligation to tell us everything it happens to dig up on a private citizen. In fact, it's obliged not to do that in many cases, given the power to wreck lives it possesses.

The larger issue here is people's love of punishing others. Americans seem addicted to punishment, even when the punishment's disproportionate to the offense. Many harbor a cruelty within themselves that they're blind to, so it's hardly a surprise that the U.S. is the world's number one incarceration state and a nation where online people who've misinterpreted your words or behavior are dying to cancel you, no questions asked.

"Punish first, ask questions later" is an attitude many believe to be a calling card of the right wing, but the phrase could very well be the motto of Cancel Culture, a left-wing phenomenon. The Register bought into this ugly group-think by exceeding its purview.

An unconvincing Register article justifying their shabby treatment of King asked, referring to his tweets, "Shouldn’t that be acknowledged to all the people who had donated money to King’s cause or were planning to do so?" Has anyone ever wanted to know about a teenager's tweets when considering a donation to a children's hospital?

The Des Moines Register, pretending it acted responsibly by offering lame excuses and rationale, is wasting an opportunity to provide, with a simple mea culpa, a lesson in the boundaries the media should observe. But the media never apologizes, and rarely learns from its mistakes.