An unprincipled dilettante at work. 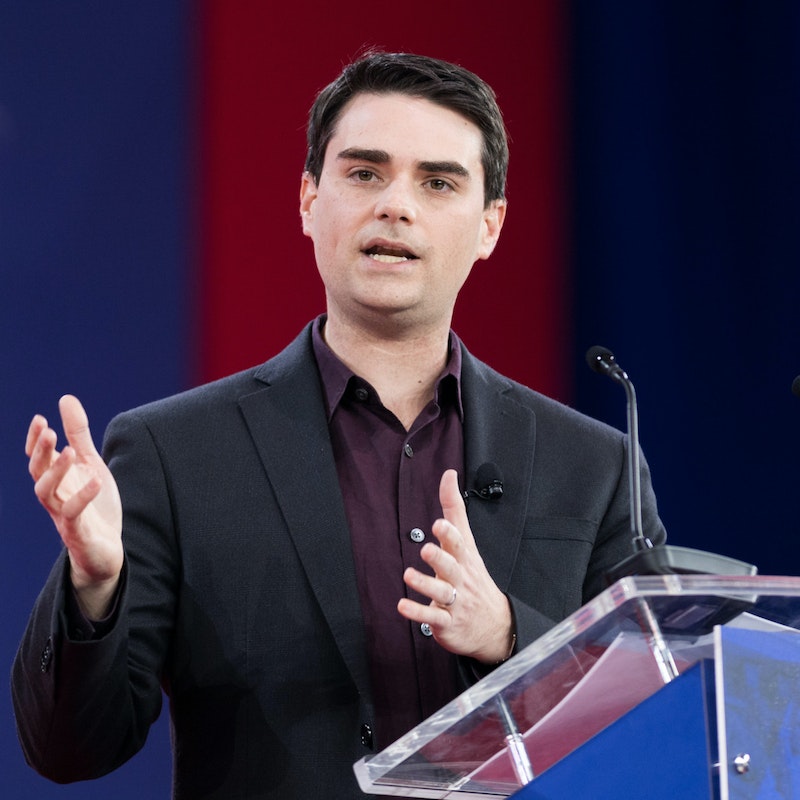 Ben Shapiro, principled conservative, tweets: “So far, there’s no evidence of a cover-up (both the transcript and the whistleblower complaint are public), no evidence of quid pro quo (multiple reports state that the Ukrainians didn’t even know military aid was being withheld). So what exactly is the theory of impeachment?”

Here’s one theory: Donald Trump used his presidential powers to seek personal gain, namely the injection into our political process of dirt obtained from a foreign power. True, that process has plenty of dirt now. Trying to arrange election help from a foreign government, and doing so by means of your powers as president, is still a disgrace. Trump didn’t have to play keep-away with foreign aid to violate our trust. It was enough that he abused his ability to get Ukraine’s president on the line and speak to him as leader of our government. Everything else is gravy, so to speak—rancid gravy. Shapiro deals with this argument by pretending it doesn’t exist.

Shapiro’s bulwark point (“no evidence of quid or quo”) is that maybe Ukraine’s president didn’t know that aid was being withheld. If so, Shapiro argues, any steps President Zelensky took wouldn’t have been in return for eventually getting the aid. First problem: Maybe Trump was holding back the aid until he saw whether Zelensky would cooperate. If so, that would be an abuse. America’s foreign policy operations aren’t supposed to hang fire until the President knows whether his stomach will get tickled. If the government has decided Ukraine should get the aid, Ukraine should get the aid without regard to any individual’s list of personal goals, let alone the President’s particular needs for the smearing of enemies.

Second problem: Maybe Zelensky knew. Shapiro cites just three pieces of evidence to the contrary, all flimsy. The whistleblower says he or she heard in early August that “some Ukrainian officials” were aware that the aid might be in trouble. Shapiro decides this means the whistleblower is saying that maybe no Ukrainian officials knew of any problems on July 25, when Trump placed his fateful call to Zelenksy. Then Shapiro forgets the maybe part and acts like the whistleblower just made the claim outright (“how can there be a quid pro quo when the target DOESN’T KNOW HE’S BEING THREATENED?”). The whistleblower didn’t make the claim. All he or she said was… well, see above. Shapiro also points to a story by ABC that lost some air: A Ukrainian who was close to the Zelenksy transition team said Zelensky’s aides knew that getting dirt on Joe and Hunter Biden was a condition for aid; then he said he didn’t really know if they knew this, that it just seemed like they would because the situation was so obvious. Here we have a failed piece of evidence that the Ukrainians knew the score; it isn’t evidence that they didn’t know. But Shapiro pretends that it is.

Finally, Shapiro flourishes a sentence from deep in a New York Times article: “A Ukrainian official said Mr. Zelensky’s government did not learn of the delay until about one month after the call.” Good catch! I look forward to seeing it followed up. Does the official know what he or she is talking about? Possibly not, if the whistleblower heard in early August that some of the Ukrainians knew what was up; early August isn’t “about one month” after a July 25 call. Another question: Does it matter if Zelensky knew at the time of the call? Maybe Trump just had to drop his hints and then let his counterpart notice that the money was sure taking its time. I don’t know. I do know that Shapiro told us “multiple reports state that the Ukrainians didn’t even know military aid was being withheld.” The multiple reports appear to be this one sentence.

Shapiro’s a principled conservative. Here’s one of his principles: Never give a sucker an even break.