Is humanitarian aid helping or hurting? 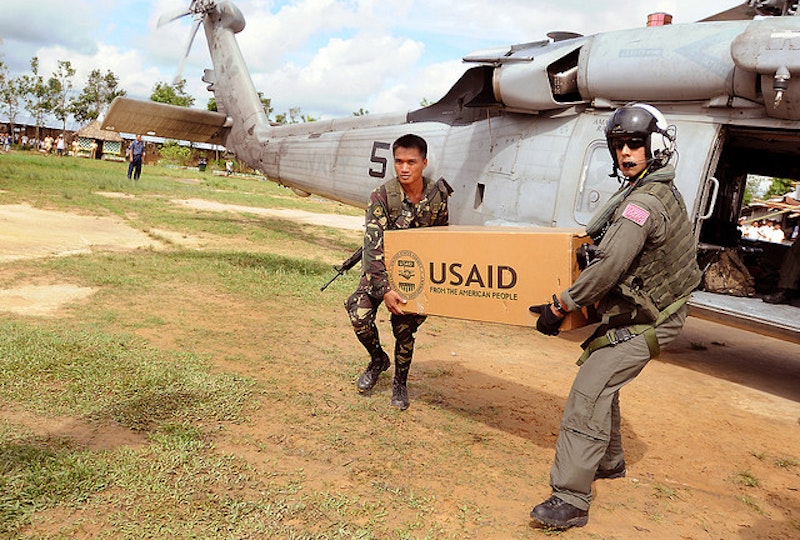 Americans are some of the most generous people in the world. When we see others in pain, the heart contracts and the wallet opens. According to USAID, the government agency responsible for coordinating foreign aid, Americans gave $1.4 billion in humanitarian assistance or food aid, $1.9 billion in emergency food aid assistance, and $375 million for development food aid programs globally in fiscal 2009. Have you ever wondered, though, how much of that actually makes it to people in need? And even if it does, how much good it actually does?

Linda Polman has answered those questions in her new book The Crisis Caravan: What's Wrong With Humanitarian Aid?, and it looks like we are throwing good money after bad. Not only are we failing to help some of the poorest and most vulnerable people on the planet, in some cases, we are actively contributing to their suffering, all the while patting ourselves on the back for our good deeds.

According to the author, the essential problem is that NGOs are in competition with one another when they should be cooperating. Only by raising their public profiles can they raise the funds necessary to continue their work, which in turn means that they have to go where the news cameras are. To do otherwise would be organizational suicide.

At best, this leads to poor allocation of resources. If the world's attention is focused on Aceh and the victims of the tsunami, you will be hard-pressed to raise money for the upkeep of refugee camps in Sierra Leone. And if donors are interested in funding “sexy” projects like providing state-of-the-art artificial limbs for children who have had limbs forcibly amputated, then that is the project that will move ahead, never mind the fact that there are no local qualified technicians to adjust and repair the limbs as the children grow. In the end, all you need is one photo of a smiling child waving their realistic prosthetic hand to help with next year's fundraising.

At worst, however, aid agencies and NGOs are actively supporting combatants and allowing a conflict to continue, as was the well-publicized case with the Goma refugee camps in then-Zaire. After the genocide in Rwanda, many of the Hutus who had participated were among the refugees streaming in to Goma. They were fed and treated at the camps and then snuck away in the night to continue fighting across the border in Rwanda. The NGOs were completely unable to stop the militias from operating inside the camps, from “diverting” aid money and supplies, and from conducting campaigns of intimidation, torture and murder. To the outside world, though, the NGOs were saving poor Africans from the ravages of cholera. It was a nice, simple story that kept the money coming in.

From the drought in Ethiopia in 1980s that was purposefully created by the Mengistu Haile Mariam government not only so they could starve their opponents but also so they could use taxes on foreign aid and preferential exchange rates as a way to fill their coffers to the current state of affairs in Afghanistan, where huge amounts of money disappear through bribes and shoddy accounting and local staff have become the preferred targets of jihadist groups, Polman shows us how NGOs and foreign aid agencies are actually doing a great deal of harm in their quest to remain visible and relevant.

As a freelance journalist, Polman covered many of the great humanitarian disasters of the last 20 years, and the first-hand stories that she shares throughout the book are especially damning, revealing an insensitivity and cynicism in the people we imagine to be our selfless good Samaritans. Although many of the issues that she covers have been raised before, they apparently bore repeating since there has been very little change in the humanitarian industry to reflect lessons learned from colossal failures like Goma.

Polman has no neat solutions to offer, saying only that reflection and discussion are necessary and that each crisis zone is unique, but at the very least, she would like to see humanitarianism removed from the pedestal we have so unwisely put it on. It is not, as some would suggest, a question of continuing as we are or doing nothing. If we can be critical of the humanitarians, if we can demand some level of responsibility, we might be able to say “never again” and actually mean it.