t’s an ironic twist that people and parties think of presidential primaries in terms of states when actually they’re conducted by Congressional districts. 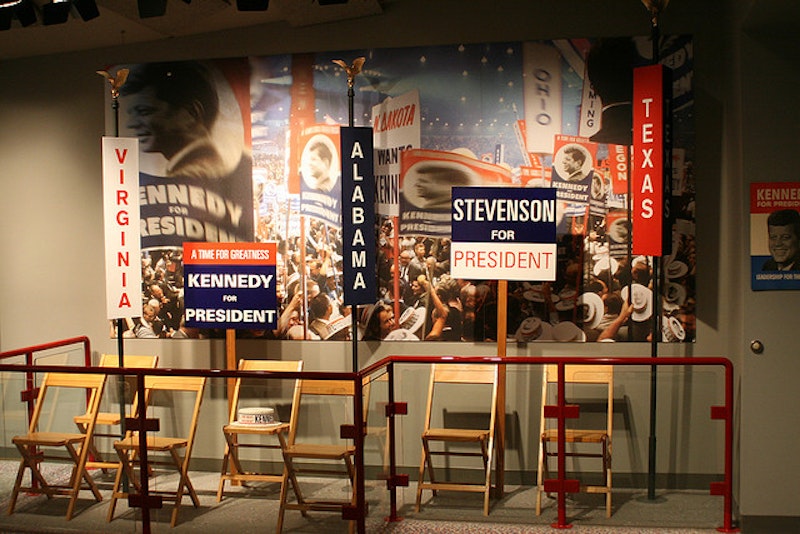 Finally, after years of neglect and second-tier status, Maryland is getting a presidential primary date all of its own. Not that it makes a difference, because effectively there will be no meaningful Democratic contest next year. But in shuffling the election dates, the General Assembly might have created a disadvantage for candidates for governor. If the national election calendar holds up, Maryland’s 2012 presidential primary will be held on April 3, with no other consequential elections immediately before or after, a consideration that could entice candidates to campaign in the state instead of the usual pass-through brush-off. The 2014 primary election for governor will be held in June, which could create time and money problems for candidates.

But the big daddy of them all, Super Tuesday, is scheduled for February 7, 2012, and, as usual, unless changes are made, the primary election could, for practical reasons, be over. On that date, 14 states are scheduled to vote, including delegate heavyweights such as California, Illinois, New Jersey and New York. But—and get a load of this—the all-important but illusory headline make-or-break Iowa Caucus will be held on the day before Super Tuesday, on February 6, leaving little time for campaigning in far more numerically important states. For some mythical reason, Iowa has managed to convince America that its caucuses are the most important events in American history since the signing of the Declaration of Independence.

In 2008, the Maryland presidential primary was held on February 14 as part of what became known in the media world as the “Potomac primary.” It lumped Maryland with the District of Columbia and Virginia in a convenient package which facilitated what little campaigning there was and reduced the expense of television and radio ads because of the compactness of media markets.

Both national parties are applying pressure on the states to scatter their presidential primary elections across the winter and spring calendar to avoid what is known in the political trade as “frontloading.” But try as they might, the insistence of some states such as Iowa and New Hampshire to be in front of the pack skews the schedule and defeats the purpose. In Iowa and New Hampshire, primary elections are big business and are tantamount to a tourism industry unto themselves, especially for hotels, bars and restaurants. Campaigns establish a presence and set up shop often a year in advance of an election. They are followed by the media scrum that encamps for the duration of a campaign. And now the two early states are joined up front by Nevada and South Carolina within a week of the original front-of-the-pack states.

The Iowa caucuses are more like county fairs or church socials than elections. They were originally designed to resemble community assemblies, or town halls, of the early days of the Republic. The caucuses take place in all 1784 precincts in Iowa’s 99 counties. The outcomes are determined not by secret ballot but by how many supporters a candidate can flush out and pack into a caucus, usually held in a church basement, a fire hall or a school auditorium. All manner of motivations are used—which candidate provides the best supper, the biggest barbeque pit, the most convenient rides to the caucus sites and even live entertainment—that in an urban setting might be considered something short of bribery or buying votes. This approach, supposedly, is retail politics at its most artful unlike the wholesale politics of television commercials and the mass appeals of stadium speeches.

It’s an ironic twist that people and parties think of presidential primaries in terms of states when actually they’re conducted by Congressional districts. Convention delegates, pledged and unpledged, usually the background notes to an election, are chosen by district, by Democrats in a very convoluted representational system and by Republicans in a simple and straightforward vote. There are really two separate elections that take place on primary day—the beauty contest and the competition for delegates. It’s possible to win one and not the other and a 15 percent threshold must be met to qualify for delegates. And it’s the ultimate roundup of delegates that counts, for they are the proxies who nominate and ratify the party choices at the national conventions. Understanding and applying that theorem was the hallmark of President Obama’s 2008 primary campaign. While Hillary Clinton and her campaign apparatchiks were targeting individual states, Obama’s operatives narrowed the equation to individual Congressional districts and piled up votes in obscure areas by organizing the vote and getting it out on election day.

On another level, the 2014 election for governor, a year with an open seat, brings with the change of dates different campaign dynamics. For years the primary election had been held in May. But after the election of Republican Spiro T. Agnew in 1966, Democrats in the General Assembly got a bright idea. They decided to move the primary election to September for several reasons: (1) It would allow more time for a candidate from the legislature to organize and run a campaign following the April adjournment; and (2) it would compress the time between the primary and November general election to about eight weeks and allow the momentum to continue without a long break between elections; and (3) but most important, there wouldn’t be enough time between elections for a Republican in a Democratic state to organize an effective general election campaign.

Moving the primary election for governor to June will dramatically revise that equation and the original intent of the September primary. For openers, pushing the election back to June will alter the rhythm and the pacing of a campaign, making it difficult for candidates to sustain momentum throughout the summer and fall until November. It also crimps fundraising as the governor and legislators are prohibited from raising campaign money during a 90-day session. And attempting to maintain enthusiasm and presence will cost substantially more money for media advertising and the other costs to sustain a campaign operation. It has always been axiomatic in Maryland politics that voters’ minds are elsewhere, say Ocean City or Rehoboth or a favorite crab house, during the summer months.

Maryland has always been kind of a pit-stop state for presidential candidates. It’s small, it’s compact and its political coloration is certainly well established—it’s the bluest of blue states. Republicans need not apply. Only three stops are necessary, if that many, for a Democratic candidate—Baltimore City, Prince George’s and Montgomery Counties, the 1-95 bread crumb trail that is the voter-rich terrain of the Democratic party in Maryland. The state is covered by two media markets—Baltimore and Washington—with an overlap in the center and into Virginia. But cable TV and other electronic gizmos have rendered media markets quaint and redundant. And for many of those reasons, presidential candidates have by-passed the state except for a token appearance or two as Obama does for an occasional photo-op or feel-good speech.

There are 24 jurisdictions in Maryland and only three or four of them control the outcome of elections, a reverse of the bad old days before the “one man, one vote” ruling when rural counties dominated the state’s politics. Whether its presidential politics or a campaign for governor, dates do make a difference except when the state’s taken for granted, as Maryland often is, and when there’s really no contested presidential primary, as there isn’t next year. But let candidates for governor beware of the date and money trap in 2014.