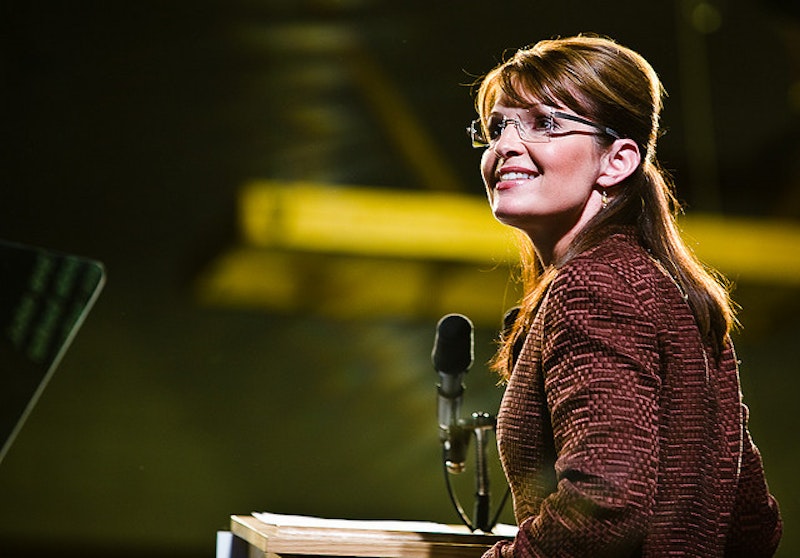 Normally, I avoid writing anything about Sarah Palin just on principle. The woman isn't a politician so much as a celebrity and giving her any kind of media attention, even negative, only serves to keep her around longer. She and her remaining hard-core Tea Party supporters may not be ready to acknowledge it yet, but Palin’s had it. With the more media friendly and unabashedly bizarre Donald Trump stepping into the political ring and dominating the air time with his hilarious brand of crazy, who needs Palin anymore anyway?

But something Palin said last weekend at a Wisconsin rally has really been bothering me. The sparsely-attended Tea Party rally was organized by the Koch brothers' conservative Americans for Prosperity and was largely focused on trashing the recently reached budget deal. Palin laid into GOP legislators, saying they hadn't fought hard enough for what their constituents wanted and that they needed to “learn to fight like a girl.”

While this was probably nothing more than a throw-away line appealing to the tough-talking Mama Grizzlies and a nod to the national champion University of Wisconsin women's hockey team, it’s basically suggesting that the refusal to compromise is somehow a feminine trait and a good one at that. Palin and her followers are incensed that the budget passed by Congress didn't include all of the cuts that they wanted. Because they didn't get absolutely everything they wanted, they feel cheated. So, to hell with what the rest of the country wants, they’re going to hold their breath until things go their way rather than give in to the weakness of acknowledging that other people may have different views about fiscal policy and what is best for America.

Frankly, I think that attitude is less feminine than it is childish. I'm not sure when “compromise”  became such a dirty word in this country, but without compromise, nothing would ever be accomplished in a democracy, particularly in a two party system like ours. Somewhere along the line it became politically dangerous to try and find some common ground, even though that is the only way to move the machinery of government ahead. It's much easier to attack the patriotism of the other side and score cheap political points.

So the budget deal has been unpopular on both sides of the political spectrum because each side has had to make concessions. There are certainly aspects of it that I find problematic. I would much rather have reduced military spending and created a more equitable tax code than cut heating subsidies for poor Americans, for example. But at the same time, Democrats were able to protect some of the programs that I feel strongly about, like Pell grants and federal funding for Planned Parenthood. Give a little, get a little.

However, even if there are some points that I would disagree with, it is nonetheless a deal I can live with. It's better to compromise and reach a settlement even if the two sides are ambivalent about it, than to squabble like children and refuse to make any concessions, leaving the government unfunded and government employees to pay the price.