If they can't tell right from left, how do they tell DeSantis from Jeb? 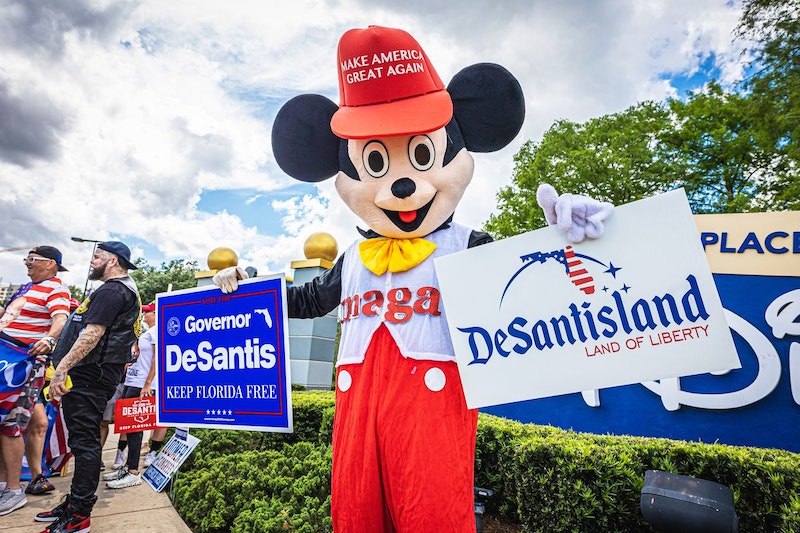 It’s nice when authoritarians have small ambitions, maybe just wanting to lord it over one island or company.

That doesn’t mean, though, that we should urge them to give it to their small target audience good and hard. There’s no logical reason we can’t have tiny fiefdoms ruled (if they must be ruled at all) with a light touch, the best of both worlds. Instead, electoral politics the world over usually just gives people a choice between forms of authoritarianism (left, right, secular, religious, etc.)—and the localists can be just as fascistic as the globalists.

Even politicians’ promises to prioritize the desires of the masses over the desires of bureaucrats can be roundabout evidence of an authoritarian streak.

In this week’s French election, Le Pen didn’t promise the French would end up unruled. At best (and most radical), she vowed they’d be ruled via frequent referenda, the sort of end-run around the usual political process beloved by frustrated political activists across the spectrum—but not necessarily an end-run that would leave individuals freer. The masses can propose pretty stupid referenda for harrying their fellow-citizens.

What’s needed is a popular desire to elude oppressive laws without eluding the norms we really need, such as non-violence, respect for property rights, civility, and so forth. Apparently, people find that a tricky balancing act.

Even in Hungary’s recent landslide for autocratic Orban, you can see an indirect, fumbling desire for freedom—if the alternative in some Hungarian minds is a return to (not so long-ago) socialism or conquest by Islamists. Unfortunately, Orban’s idea of political order and stability is to amass political power in his own hands and the hands of his cronies. Useful in the short term, depending on your policy goals, but a bad sign for the long term.

We should be grateful for almost anything that decentralizes power and decreases the worship of power, even if the pattern doesn’t fit the usual left-wing or right-wing agenda: like the Russian nationalist Zhirinovsky (not to be confused with Dugin) permanently exiting the scene (much as one hates to speak ill of the dead), a reminder of the weird period in the mid-1990s when figures like Pat Buchanan were popping up around the world to encourage nationalisms but not necessarily liberties; Imran Khan being voted out by the Pakistani parliament after mismanaging the economy, blaming the U.S. for it, and trying to dissolve the parliament; even Meghan and Harry contemplating settling in New York City as tacky big-name celebrities instead of clinging to the power of royalty.

Better the fits and starts of these faltering, fading powers than the calculating attempt to create a stable new super-structure for overseeing all human affairs, the inhuman goal at which this official video from the World Economic Forum eerily hinted, just days after anti-globalist Trump left office last year. Even as the mainstream press was telling us that to worry about the WEF’s influential “Great Reset” plan was to fall prey to conspiracy-theorizing, WEF’s own videos were proclaiming “Capitalism as we have known it is dead” and almost hypnotically urging viewers to see draconian new climate regulations as somehow the logical next step in Covid recovery. Numerous world leaders buy into this stuff, and Biden alluded to it in his recent State of the Union address.

But one can embrace the world through trade instead of Euro-style bureaucracy and in so doing foster markets instead of martinets back home as well. Ghanaian economist George Ayittey, who passed away earlier this year, understood that, in defiance of the assumptions of so many on the left, the right, and the arrogant, forum-attending, liberal center that Africa must be an aid receptacle.

By contrast with the simplicity, clarity, peace, and unfettered productivity of free markets, in fact, Trump-style economic nationalists, with their longing for tariffs (whether meant to be punitive or protective), don’t look like much of a rebellion against the globalist bureaucrats at all. After all, the nationalists also want markets controlled by governments instead of merely by old-fashioned customers and sellers. The right, then, looks more and more like another variation on socialism, just one with a more geographically-localized focus—and a bad attitude. It’s not easy to teach market economics to people belligerent enough to, say, flip out during a Piers Morgan interview.

With so many liberating and authoritarian impulses bound together in current political movements and politicians’ minds, then, we must be cautious in peeling an onion such as the dispute between Disney and Trump’s possible political heir, Florida Gov. Ron DeSantis.

The glib version of the dispute is that DeSantis wants to tax Disney for being too gay. Sadly for anyone eager to choose sides, though, the situation is more complicated. Disney already had some degree of special economic autonomy on its land in Florida, in essence paying more in taxes in return for being allowed to run its own sanitation programs and the like. In return, Disney minded its own business on many hot-button political issues instead of lobbying.

Parents footing the bill for such schools understandably want their representatives to weigh in on such curricula. Disney disagrees with those parents, so DeSantis and his supporters would like to punish Disney—though the practical result would just be to tax and regulate Disney like any other corporation in Florida.

Ideally, there would be no government about which to fight cultural or regulatory battles like this, and even anarcho-capitalists like me might disagree about whether Florida government treating Disney as a special case made it more like a free-market, libertarian, perhaps even anarcho-capitalist organization, but whatever one thinks of the practical regulatory/tax outcome of this squabble, there’s reason to be wary of the lessons typical DeSantis supporters extract from all this.

Some may genuinely want a more homogenous, special-interests-free law code. Many, though—even some adjacent to the libertarian movement if online chatter is any indication—draw the more autocratic conclusion that it’s good to use law to punish political and cultural “enemies,” as if that loaded designation should ever crop up in tax forms. We shouldn’t trust DeSantis, or for that matter his frenemy Trump, and certainly not an autocrat like Orban, to decide when it’s time to use the power of government to reshape culture and punish foes (aside from full-fledged, property-rights-violating murderers, burglars, and the like).

The right used to be the faction claiming to think about sustaining a political culture over the super-long-haul, but we will not find ourselves living in a very magical kingdom if routine tax and regulatory decisions turn into punitive opportunism. We may find ourselves in something resembling the stagnant little monarchies and socialist states we thought we left behind in Continental Europe, though.

Perhaps the biggest irony of New Right types currently longing for a Floridian who sometimes talks like a government-shrinker but is willing to tax, regulate, and even spend a little more to make a tiny symbolic gesture in the direction of Christianity, family, or manliness is that it sounds as if they ought logically to add the name of one of their ostensible enemies to their animatronic hall of political heroes and instead of just shouting “DeSantis!” and “Trump!” shout “JEB!” The Bush family knew how to lob a few culture-war bombs on the cheap, and it looks as if the rising generation of right-wingers will fall for that sort of thing as easily as their Boomer predecessors did.

I’m not suggesting everything the Disney Corporation does is cooler than that, but they do technically have their own private submarine fleet. The creators of things like the Small World ride are at their best when engaged in that sort of New World innovation, and it’s nice when neither they nor politicians think instead like whimsical Old World monarchs. Most of us peasants would nowadays like to be able to use a predictable, simple, property-rights-based law code, without worrying from week to week about whether our rulers are currently thinking like mad queens from Alice in Wonderland or more like vengeful princes out of The Northman.