The Wall Street Journal pundit reaches for a profound social message in the aftermath of umpire Jim Joyce's missed call. 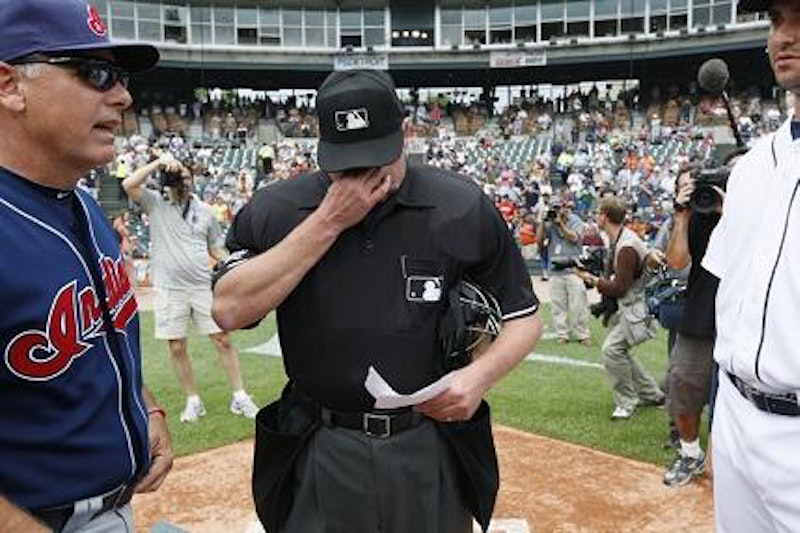 Most weeks, I find Peggy Noonan’s weekend column in the Wall Street Journal an entirely sensible take on whatever political rhubarb has embroiled Washington in the previous seven days, an antidote to the media hysterics on both the left and right. On occasion, though, Noonan can’t resist a feel-good story and this is when she falls flat, the prose Pollyanna-light and the moralizing more appropriate for a Sunday morning turn at the pulpit. Noonan began her June 4 essay with this inadvertent warning: “We needed some happy news this week, and I think we got it.” In reality, there’s no shortage of “happy news” in any given week and it wouldn’t be difficult to pluck one from the heap and then run with it; it’s just that some stories instantly explode and hog all the attention. Noonan got caught in the trap.

Which in and of itself is okay, because Noonan’s topic—MLB umpire Jim Joyce’s blown call last Wednesday night in Detroit that deprived the Tigers’ Armando Galarraga of a perfect game—really was, in an increasingly rare combination of live and virtual conversation from the moment the incident occurred, a head-turner. My son and I were watching a Red Sox ballgame that night and, as often happens when something historic (in the baseball world, at least) is taking place, Boston’s commentators mentioned it, and so we switched channels just in time to see Joyce flub a close call at first and catch Galarraga’s 100-watt smile of befuddlement. Booker immediately reacted like most everyone else, I suppose, who saw the play: fire the ump! My jaw did drop upon seeing the multiple replays that the stunned Detroit broadcasters played over and over, and wondered why Joyce, in a 3-0 game, just didn’t give the benefit to the defense, let the pitcher and his teammates celebrate and that would be it.

As millions of Americans know, the story then, in the space of the next 12 hours, transcended baseball and took on the national importance of the last episode of Lost or a movie star caught with a hooker. Joyce, after retreating to his quarters, looked at a replay, recognized his blunder and then met with Galarraga to apologize and make the best of an unfortunate situation, even while baseball purists were calling on MLB Commissioner Bud Selig to overturn the call. As the New York Times’ excellent sportswriter George Vecsey noted on June 3, “Joyce and Galarraga are now forever linked; they could even be the odd couple at memorabilia shows decades from now.” And who would be surprised if the duo showed up for an hour at the White House next week, with Barack Obama sharing a beer (or maybe something stronger for Joyce) with the pair and briefing them on his administration’s plan to clean up after the damage caused in the Gulf of Mexico.

So that’s swell. But Noonan, for whatever reason, took the opportunity to elevate Joyce’s demonstration of honesty into a full-blown sermon. She writes: “What was sweet and surprising was that all the principals in this story comported themselves as fully formed adults, with patience, grace and dignity. And in doing so, Galarraga and Joyce showed kids How to Do It.”
Pardon me, Peggy, but aren’t you pilfering one of the left’s favorite themes, invoking The Children for everything that’s on their political agenda (global warming, tax hikes on the devious rich, health care, tolerance for Iran while castigating that brute state of Israel, and a 10-fold increase of regulations on private business)?

She continues: “A lot of adults don’t teach kids this now, because the adults themselves don’t know how to do it. There’s a mentoring gap, an instruction gap in our country. We don’t put forward a template because we don’t know the template. So everyone imitates TV, where victors dance in the end zone [which actually started in the 1960s, with the New York Giants’ Homer Jones the first to “spike” a football into the ground after scoring a touchdown]… where victims of an injustice scream, cry, say bitter things, and beat the ground with their fists. Everyone has come to believe this is authentic. It is authentically babyish. Everyone thinks it’s honest. It’s honesty undignified, self-indulgent, weak and embarrassing.”

Pundits often are guilty of gross generalization, but Noonan’s fantasy is, distressingly, out of Pat Buchanan’s Ozzie & Harriet playbook. I don’t quarrel with the columnist’s lament that American culture is coarser than when we were both young, but this devolution didn’t begin in the last couple of years. Some of the Journal’s editors, no doubt, would trace it all to the counterculture of the 1960s—public nudity, flowers in the long, unwashed hair, students taking over classrooms—but I’d say Tom Wolfe was more accurate when he dubbed the 1970s the “Me Decade.” I believe this is when Americans stopped wearing their Sunday best to church and funerals; loud leisure suits burned your eyeballs; disco and cocaine whores took over nightclubs; and People magazine began publishing, instantly captivating the public and providing a more respectable digest of trivial celebrity scandals than the National Enquirer.

Since that time, Donald Trump emerged as the most obnoxious developer in New York; the “Greed is good” tagline from the film Wall Street was both denounced and embraced; “casual Fridays” began at the workplace and eventually became the norm; Bill Clinton set a new low bar for boorish behavior in the White House; frivolous litigation increased dramatically; political correctness ran amok; and the phrases “thank you” and “you’re welcome” seemed to go the way of the top hat. Yes, Noonan’s right in lashing out at television and the cesspool of fools demeaning themselves on a daily basis, but this isn’t breaking news.

It’d be too harsh to call Noonan’s column “galling,” but it was certainly naïve. Never mind that not “everyone imitates TV,” and that there are plenty of parents, perhaps even a majority, who do their best to set proper examples for their offspring, but the idea that the dignified behavior of a contrite baseball umpire and a wronged pitcher might reverberate into a lesson for today’s youth is absurd. In the next month, or week, another athlete will be revealed as a drug-user, wife-beater or drunk and the Joyce/Galarraga lesson in manners will be forgotten.

A final note: as a frequent champion of the Wall Street Journal, which I think is the finest daily newspaper in this country and perhaps the world, it’s only fair to point out there was a “perfect game” editorial in its pages (also on June 4) that was downright silly. Joining the mob, a Journal editorialist got a little dizzy. An excerpt: “What Commissioner Selig isn’t getting is that this taint, this blot, this imperfection will hang over baseball forever. There is no upside to letting it pass because it won’t pass. Like the Black Sox scandal or you-know-who’s home-run record, it will haunt baseball forever.”

While Peggy Noonan’s still on her high horse, maybe she could let whoever wrote that editorial that it was, in fact, “authentically” embarrassing.