On immigration, Pennsylvania is hoping to follow in Arizona's footsteps. 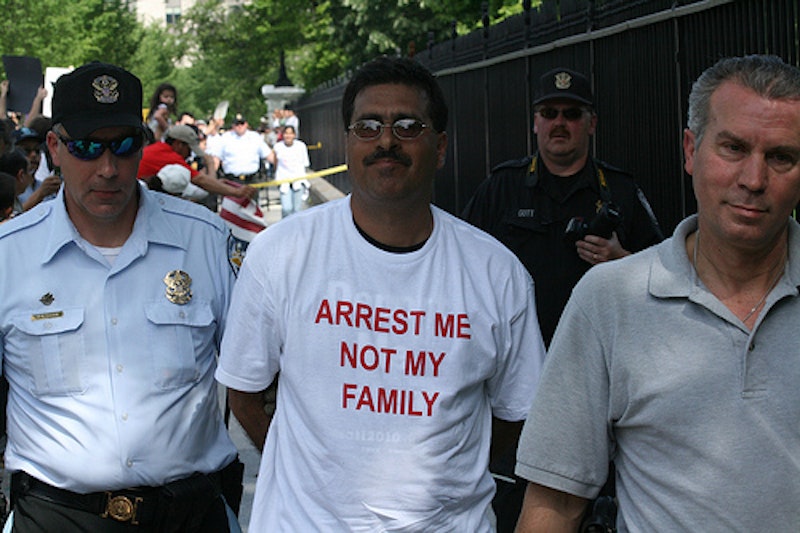 Even as the debate over Arizona’s controversial immigration law continues, and litigation challenging its constitutionality piles up, other states are seeking to enact similar laws to solve with the “immigration crisis.” In Pennsylvania, Republican State Sen. Daryl Metcalfe introduced House Bill 2479, titled the Support Our Law Enforcement and Safe Neighborhood Act, before the General Assembly on May 5. Touted as a “mirror” of Arizona’s law, the Pennsylvania statute’s intent is “to discourage and deter the unlawful entry, presence and economic activity by persons unlawfully present in the United States.” Since “illegal immigration is causing economic hardship and lawlessness” and “there is a compelling interest in the cooperative enforcement of federal immigration laws in the Commonwealth,” the drafters believe the law is necessary.

Before passing judgment on the proposed law, however, Pennsylvania legislators will need to answer three key questions. First, will the exclusive federal regulation of immigration preempt the proposed law if it becomes law? Second, does Pennsylvania have a compelling interest in enacting the law because illegal immigration causes extensive crime and severe economic hardship? Third, even if the state has such a compelling interest, is the law unconstitutional because it infringes upon constitutional rights?

The Constitution’s Supremacy Clause states, “the Constitution and the laws of the United States … are the supreme law of the land … anything in the Constitutions or the laws of any state notwithstanding.” A state law that conflicts with a federal law under the Supremacy Clause must be struck down. The drafters of the proposed Pennsylvania legislation have tried to avoid the conflict by declaring the provisions of the act shall be implemented in a manner consistent with federal immigration laws. The inquiry does not end, however, merely because the law’s proponents do not intend for the laws to conflict. In Pennsylvania v. Nelson, when striking down a law making it a state crime to overthrow the United States government, the Supreme Court said, “When Congress has taken a particular subject matter in hand, coincidence is as ineffective as opposition, and a state law is not to be declared a help because it attempts to go farther than Congress has seen fit to go.”

According to the Court, where Congress has “occupied the field” that state law is attempting to regulate, enforcement of the law could frustrate federal purposes. Under these circumstances, the federal regulatory scheme will preempt state law. Since immigration has long been a “field” dominated by the federal government, it is possible that the proposed Pennsylvania immigration reform bill, if enacted, will be preempted when challenged in court.

Even if the law survived a federal preemption challenge, is it really needed to offset the economic hardship caused by illegal immigrants? According to reform advocates, illegal immigration causes unemployment, wage depreciation and an increased tax burden on legal residents; however, there is little proof to support these allegations. A report issued by the Cato Institute and the National Immigration Forum, concludes that all illegal immigration’s impact on unemployment and legal resident wages during the past two decades in the US is at best minimal. Immigrants, furthermore, take low paying, low status positions disdained by native-born residents and they create jobs with their purchasing power and the new businesses that they start. Finally, while immigrants do partake in financial subsidy programs like Social Security and welfare, the data collected suggests that they pay as much in taxes as they receive in public benefits. Although more studies to determine the economic impact of illegal immigration specifically in Pennsylvania are needed, if the national data holds true there it is difficult to see how the state has suffered any type of economic hardship.

Proponents also argue that the law is necessary because illegal immigrants cause extensive crime, but again, statistical evidence does not sustain this proposition. The population in Pennsylvania increased from 12,432,792 in 2007 to 12,448,279 in 2008, yet in those same years, the Bureau of Justice Statistics reports that violent crimes decreased from 51,782 to 51,036. If the influx of illegal immigrants into the state (illegal immigration population is currently estimated to be 140,000) increases crime, then the statistics should show a corresponding increase, not a decrease. Nationwide, in fact, according to the FBI’s Annual Crime Statistics for 2009, violent crime decreased 5.5 percent from 2008, and property crime declined 4.4 percent. The statistical evidence demonstrates that there is no correlation between illegal immigration and increased or extensive crime.

Opponents of the proposed law, like Philadelphia Police Commissioner Charles Ramsay, believe the immigration reform bill will actually have a negative impact on law enforcement’s ability to combat crime. Many think that attempts to enforce the law will drive a wedge between police and the immigrant community. Fearful of having their resident status questioned, immigrants will fail to report crimes and will not want to cooperate with police investigations. Implementing immigration policy will also put additional strain on the already overburdened local authorities.

Statistical evidence does not support the proposition that an immigration reform law is needed because the state has a compelling state interest in combating the crime and preventing the economic hardship illegal immigration causes. Even if it did, however, the law might be declared invalid because it infringes upon individual constitutional rights. Under the Fourth Amendment, every individual, alien or non-alien, has the right to be free of unreasonable “search and seizure.” Arrests can be made only upon a showing of probable cause, or evidence that a crime is being committed and a reasonable belief that the person being detained is responsible. However, police officers are permitted to “stop and frisk” suspects based on a lesser standard, reasonable suspicion, or an objective belief based on specific facts and circumstances that justifies detaining someone for a brief period of time for investigation. Although the specific facts articulated do not need to rise to the level of probable cause to justify the detention, they must be more than a “mere hunch.”

Racial profiling occurs when police identify an individual as a suspect based solely on race, ethnicity, religion or nationality. Racial profiling is unconstitutional, as it constitutes an unreasonable search and seizure under the Fourth Amendment. Unfortunately, the proposed Pennsylvania immigration “reform” will lead to racial profiling. Under it, a police officer can detain anyone he has reasonable suspicion has violated any Pennsylvania law and is in the country illegally for the length of time it takes to determine immigrant status. Since the proposed legislation also makes it a crime for any alien, legally or illegally in the country, not to carry proscribed identification, it gives law enforcement authorities a built-in pretext for identifying an individual as a “suspect” based solely on ethnicity.

Illegal immigration into this country should not be condoned. However, state laws that unconstitutionally infringe on Fourth Amendment rights are not the appropriate remedy to the immigration problem.