It's time to retire that old stereotype. 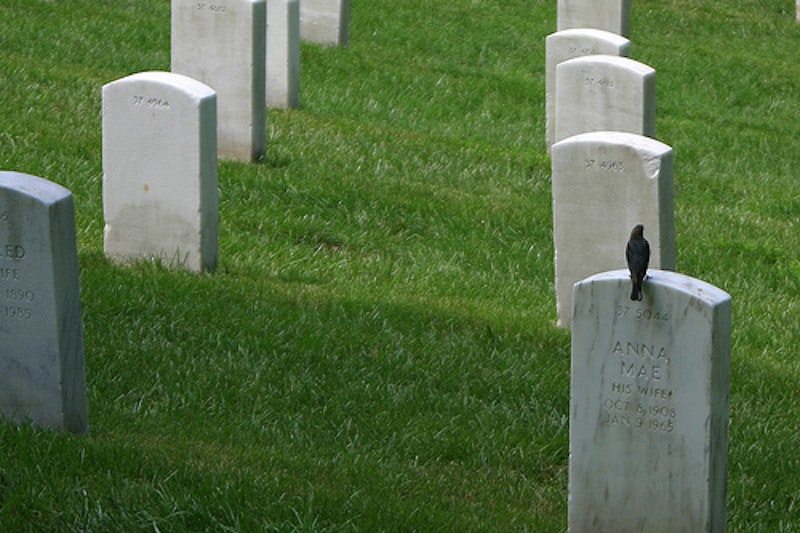 In recent weeks, twice someone in the media has trotted out the tired phrase “There are no atheists in foxholes”.
Leonard Pitts, a syndicated columnist for The Miami Herald, wrote about Louisiana Gov. Bobby Jindal's about-face on federal government interference:

As there are no atheists in foxholes, it turns out there are no small-government disciples in massive oil spills. No, with BP oil soaking the sands of his coastline, Jindal turned righteously to that big, sometimes bloated, often intrusive federal government, and asked for help.

Then, Chris Hayes, the Washington editor of The Nation, used it on Countdown With Keith Olbermann, saying, “There are no atheists in a foxhole and there are no libertarians in a crisis.”

First, let's dispel this notion that there are no atheists in the military. As a matter of fact, there are quite a few of them. A recent study by the Military Association of Atheists and Freethinkers (MAAF) looked at the demographics of the Department of Defense and found that 23.percent of DoD employees identified their religion as atheist, agnostic or no preference. Even those that explicitly chose the term atheist (just .39 percent) outnumber the servicemen and women who identify as Buddhist (.34 percent), Muslim (.31 percent) and Jewish (.22 percent).

Yet despite the fact that non-theists are strongly represented in the military, they face a great deal of discrimination and a lack of recognition, of which these unthinking comments are just one part.

It begins from the moment they enter the service. They are required to state their religion for printing on their dog tags. Although the DoD has designations for atheist, agnostic, and humanist, among other non-theist terms, recruits may find that when they get to boot camp, their dog tags have been changed. This might seem like a small thing, but since it affects how a soldier's body is treated in the event of death, it can have serious consequences. Much as a Christian probably wouldn't want Islamic burial rites, many atheists feel that the generically religious bent of the no-preference service is inappropriate for them.

There have also been reports that military personnel have been force-fed Christianity. When news stories come out about rifle sights with coded Bible verses and cadets at the Air Force Academy being evangelized, it's hard to doubt that is the case. Even the DoD itself admits there are issues.

Indeed, it looks as if being an out non-theist could even damage your career. Former Army soldier Jeremy Hall was stopped from holding an atheist discussion group while on tour in Iraq. He also says his subsequent promotion to sergeant was barred on the basis of his beliefs. He claims his superior told him that he was not suited for the position because he wouldn't be able to put aside his atheism and pray with his men. The superior denied the allegations and the case was eventually dismissed on the grounds that Hall hadn't exhausted all the possible avenues of redress within the Army. Still, more and more service members have been coming forward with similar stories. The Military Religious Freedom Foundation, which represented Hall in the suit, says they represent more than 11,000 military personnel who feel they have been unfairly treated due to religious differences.

Both Pitts and Hayes used the “it's just a turn of phrase” defense when they were confronted with their faux pas, but that argument doesn't hold water. After all, "stingy as a Jew," "lazy as a Mexican" and "black as a nigger" are all turns of phrase that decent people don't use anymore because they are cruel and racist. Unfortunately the English language is full of expressions that, although seemingly harmless, violate a collective sense of fairness and decency.

It is about time that “no atheists in foxholes” joins their ranks. When people in the media and elsewhere use the stereotype, they are belittling the sacrifices non-theist soldiers make for all of us. By denying their existence, they are denying their service, and that is simply unacceptable.