It's helpful, but not that helpful. 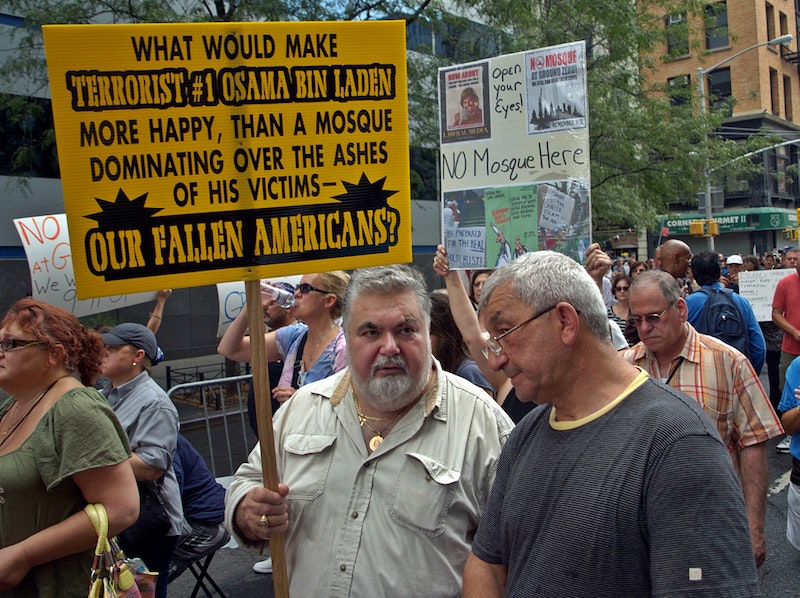 I think both writers are a little right and a little wrong, and both sides raise important points to consider. Beinart’s thesis is that America is in “the midst of a national psychosis: the worst spasm of paranoia and bigotry of the post-Cold War age.” The post-Cold War age being all of two decades, that’s not a particularly jaw-dropping statement, and the sentence is a close cousin of, “We’re in the worst economic situation since the Great Depression.”

I do think the Islamophobia-McCarthyism comparison is slightly overblown—and Smith makes a great point about prevailing animus toward Latino immigrants—but I think Russ errs with this line, “You’d think that pundits—elite or scruffy, left- or right-wing—might finally understand that constantly evoking Hitler, Stalin, Mao and McCarthy in propping up this or that argument, just has no credibility anymore.” The Islamophobia-McCarthyism comparison simply is not as egregious a linkage as putting Hitler/Stalin/Mao in the same sentence as any president or political party. Beinart does his homework, establishing a modest overlap of the two scenarios: wartime hysteria directed against certain American citizens with a prevailing fear that the Enemy has infiltrated our country. His tone and delivery, perhaps, are questionable to Smith, but I believe he approached this topic with an honest due diligence you wouldn’t find within 100 miles of, say, Liberal Fascism, American Taliban or any other book or blog post purporting to know just why this politician or that political party is exactly like the Holocaust or al Qaeda.

It’s not a perfect, even-handed comparison, Islamophobia and McCarthyism, but it doesn’t have to be. Congress isn't holding formal sessions; politicians aren’t waving lists around, but what about the unprecedented expansion of executive power in wartime? Rendition? Torture? Obama assassinating American citizens overseas? Just as there were legitimate communist threats, so are there legitimate radical Islamist threats, but it's how the government and wider public reacts to and accommodates those threats that predicates the comparison.

The harsh truth is this: The United States will always have to pay a greater price overseas than most Americans want, and despite that, Americans will never enjoy the level of security they feel they deserve. That’s the messy reality that Americans, and particularly Republicans, want to ignore. Far easier, as Sarah Palin and Newt Gingrich understand, to find a despised, terrified minority that you can vanquish without ever losing a GI or racking up a dollar of debt.

The Park51 community center is a good example of both the messy reality Beinart speaks of and the cheap patriotism employed by Palin, Gingrich, et al. Opponents have conflated the center’s construction with fear—real and imagined—and a jingoist sense of justice.

It’s unsustainable—as is current immigration policy, the wars in Iraq and Afghanistan and the current political climate. Beinart puts an interesting historical weight behind recent Islamophobic developments, but I don’t think we’ve hit a saturation point yet. It would be foolish to think we’re not on some sort of path that leads to events worse than Koran burnings. It brings to mind the FBI report that warned of rising ultra-right violence and terrorism—a report that elicited a ferocious tantrum from all the right-wingers you’re thinking of—and how that warning was backed up by a string of murders born of ultra-right motives.

One more time: it’s not the same as McCarthyism. If Islamophobia were worse than McCarthyism, it still wouldn’t be the same. Smith is correct in lamenting the over-saturation of hyperbolic conflations of historical events and what’s going on in the current news cycle. I fear we’re just stuck with that for as long as people get paid real money to sit in front of cameras and push for ratings no matter the cost.

The Islamophobia in America is aligned with well-established and legitimate anger, from the public, over 10 years of government ineptitude and economic uncertainty—anger and uncertainty whipped up by the subsequent minstrel show that is FOX and the rest of mainstream media. There aren’t any sure-fire antidotes. Smart people like Beinart and Smith and the honest debates they push in the public domain are the best defense against whatever is coming down the pipe.