Adrian Vermeule and others should declare victory, instead of attacking Ketanji Brown Jackson. 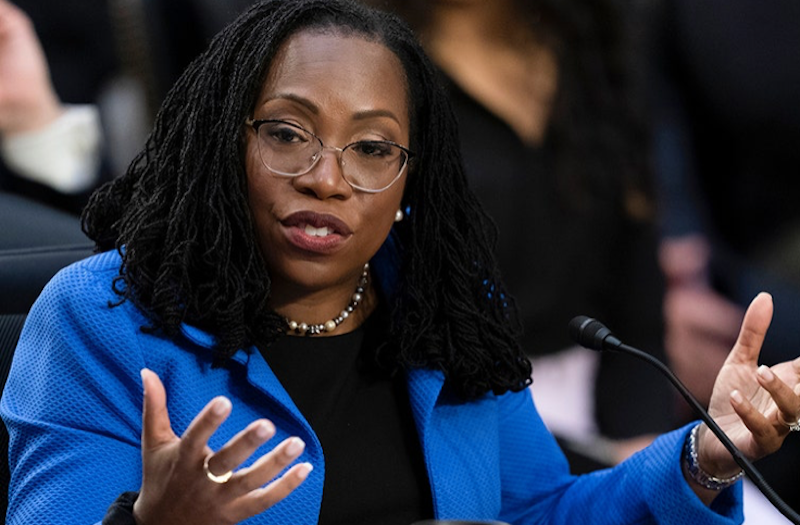 Ketanji Brown Jackson, undergoing the hazing called “confirmation,” did about as well as anyone could possibly have done. Neil Gorsuch and Elena Kagan were pretty good in this context, for example, Brett Kavanaugh and Sonia Sotomayor perhaps less so. On the other hand, it's not clear that performing well in the hearings is correlated with performing well on the Supreme Court.

Many commentators were struck by Jackson's profession of "originalism," which strengthened Kagan's stunning liberal embrace of what had been a conservative doctrine. "We're all originalists now," Kagan declared at her confirmation hearing in 2010. Jackson put it like this: "I am focusing on original public meaning because I’m constrained to interpret the text.” This, she said, “is a constraint on my authority.” And in general, Jackson emphasized that the basic function of the Constitution is to limit the power of the federal government, and that the meaning of constitutional provisions constrains the power of the judiciary.

“I do not believe that there is a living Constitution,” she said, “in the sense that it’s changing and it’s infused with my own policy perspective or the policy perspective of the day. Instead, the Supreme Court has made clear that when you’re interpreting the Constitution you’re looking at the text at the time of the founding.”

These declarations come from a nominee who’s expected to be a liberal bulwark on the court. I think they're stunning, and indicate the victory of Reagan-era conservative legal theory. Jackson didn't get "Borked," though I’ll always associate Josh Hawley with the phrase "child pornography," which he hurled at her repeatedly just because he didn't seem able to think about anything else. But she Borked herself in the sense that she fundamentally agrees with Bork's theory of constitutional interpretation, and Scalia's, Thomas'.

Meanwhile, hard-headed originalists such as Adrian Vermeule are bemoaning their own victory, which Vermeule calls "Pyrrhic." But even if Jackson decides cases in a way Vermeule disagrees, he ought to take a minute for self-congratulation. Back in the Reagan era, neither of us could have anticipated the originalist consensus. Originalism just set people (I was already in academia all day) snickering. They said that the real intentions of the founders were obviously in the founders' heads, and couldn’t be recovered. They said that obviously many issues had arisen that the founders couldn’t have anticipated, with regard to communications or medical technologies, for example. By the time of the Thomas hearings (swamped completely by Anita Hill's accusations of sexual harassment), originalism was an object of ridicule, a mere indication of the left's favorite theme: how much smarter they are than their opponents.

But let's suppose that even anti-originalist scholars think that the U.S. is a constitutional system, that the document has a fundamental role in setting out the form and limits of federal power. Then it’ll be incumbent upon them, as well, to figure out what it means. That’s a complex struggle, in which certain questions can't easily be disposed of.

Let's think about how we'd try to figure out what a literary work of the same period (call it Wordsworth's Lyrical Ballads) means. What the words in it mean now isn’t necessarily a good guide, as any responsible literary critic or etymologist would tell you; we'll have to think about what they meant in the late-18th century. In order to figure out what or who he's writing about, you might need some biography. You might need to read other things he wrote, or that his friends (Coleridge, say), wrote. There’s room for new interpretations, but they'll need to be historically justified. There’s room for new implications in the contemporary world, but in order to draw any of them, we'll need to find out what it is that's doing the implying. It might not be fully possible to prove your interpretation against all comers in a knock-down way. But if you're trying to figure out what the Lyrical Balladsmean, there’s no alternative to rummaging around in the historical data.

If "originalism" meant reading James Madison's mind, it’d be impossible and kind of silly. But if the document has any meaning at all, the original context and intention, and the meaning of the terms in the language of that time, are indispensable. Let that go, or snicker and sneer at it, and you've let go of interpreting the text altogether. Anti-originalists need to say why they're not engaged in mere erasure; that they have difficulty doing so is why we're all originalists now. I assume that Jackson's position reflects the fact that some form of originalism has won the law schools. That's a relief because, for example, in the 1080s an alternative to recovering the Constitution's original meaning was "deconstructing" it, reading it against itself. You’re not going to be able to have a constitutional system at all without some sense that the document means something definite. Once you yank its meaning from its original context, it’s very hard to describe or delimit any sort of responsible interpretive method.

There are several forms of originalism, as the "liberal originalism" of Jackson shows, and some are more plausible than others. I’d say that Vermeule's form, which seems underlain by hyper-traditionalist Catholicism, is going to be a struggle. Speaking of the founders, I wonder how Vermeule thinks an interpretation of the Constitution that makes it as compatible as possible with traditionalist Catholicism would have flown in 1789 among all those WASPs. Even in that Postpiece, Vermeule and collaborator hint that on their view, states can prohibit abortion, or same-sex marriage, because these are matters on which the Constitution is silent.

But that the Constitution doesn’t mention X surely doesn’t entail that prohibiting X is compatible with the Constitution, and if justices have found a right to privacy not-very-concealed in the text, that's in part because violations of privacy (for example making life-and-death medical decisions) plunge you into a situation in which the enumerated rights cannot be exercised. Vermeule's position is that the Constitution doesn’t mention abortion or same-sex marriage, and that states are hence permitted to legislate on these matters. Let me ask you this, Vermeule: if Vermont passed a "one-child" law and arrested women who were pregnant with a second child and aborted the fetuses by force, would you think that was incompatible with the 14th amendment?

Jackson's view as expressed in the hearings, roughly, is that if you've got a new set of facts that the people who drafted the Constitution couldn’t have anticipated, you start by figuring out what constitutional provisions might be relevant, then you try to say what they mean, then you try to apply them. The modified originalism described by Jackson is in some sense unavoidable: something in this region is the only plausible answer. Though there’s plenty of disagreement about what analyses in that style might yield on particular issues, there's evidently something like a left-right consensus among mainstream legal thinkers that constitutional jurisprudence has to run along these lines.

That appears to me to amount to progress, even if it doesn’t, in itself, solve many of the disagreements on specific legal questions.