Just Look What You Can Accomplish Without "The Vision Thing" 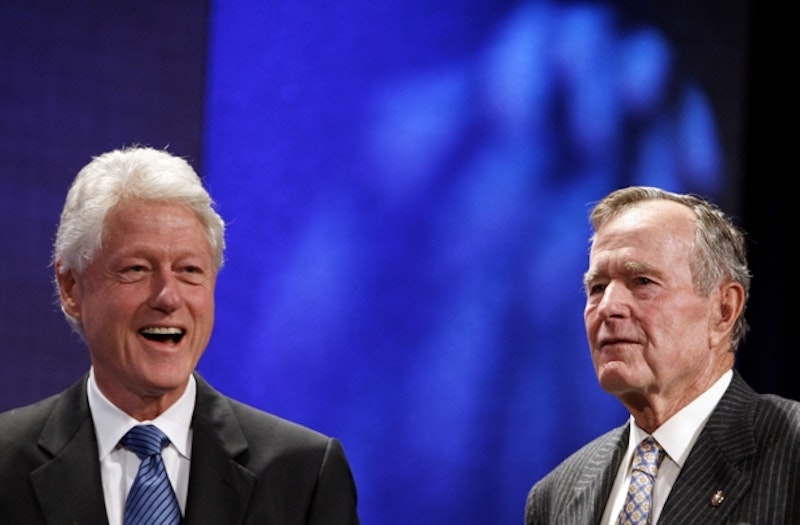 Two nights ago in Washington, everyone from Bill Clinton to Jim Nantz turned out to celebrate George H.W. Bush. “He can do virtually no wrong in my eyes,” remarked Clinton, as many of those in attendance nodded in sage agreement.

Okay, so we’re not talking about Bush the Younger, who though absent from the national stage for over two years is still making his presence felt via a pair of ceaseless wars, a seemingly insurmountable national debt, etc., but Bush the Elder, the Reagan semi-acolyte whose Oval Office tenure is best remembered for the first Gulf War, “no new taxes,” and his mangled syntax.

So why was Bush 41 saluted at Washington’s Kennedy Center last night, for an “all-star” special to be broadcast on NBC next Monday? In recognition of his foisting Dan Quayle upon the populace? For his Iraq misadventure, which charitably can be called “mishandled” regardless of one’s personal politics? Perhaps for his reluctance to engage in what he so famously derided as “the vision thing”?

Well, no. It was for his long-term commitment to volunteerism. You may recall that he and Clinton were instrumental in soliciting aid for victims of Hurricane Katrina and the 2004 Indian Ocean tsunami. And Bush thinks that volunteering to help people is a good thing. He himself volunteered to head the CIA, and on three occasions volunteered to be elected President, though the majority of people saw fit to give him the post only once.

Last night’s gala reportedly raised some $30 million for the Points of Light Institute, a nonprofit organization that helps fund volunteer organizations nationwide. Though “a thousand points of light” was one of the more arcane phrases that Bush turned—in this case, lifted by the typically overreaching Peggy Noonan from C.S. Lewis—and a memorable centerpiece for Dana Carvey’s impersonation, Bush himself has no direct involvement with the Institute.

But that’s no reason not to throw a party to celebrate the fact that the old spook (in the CIA sense) is still among us. Along for the ride were Clinton, Jimmy Carter (seated, as seems to always be the case in these instances, off to the side, presumably so his own special brand of ickiness doesn’t ooze all over the other ex-presidents), and of course most of the Bush brood, including W., Jeb, Barb, and the rest of the would-be dynasty.

As for the evening’s performers, it was understandably a pretty motley crew: Reba McEntire and Garth Brooks, of course, but also Brad Paisley, Carrie Underwood, Darius Rucker, Kid Rock, Miranda Cosgrove, and Cee Lo Green (who almost certainly did not perform “Fuck You”). Anyone hoping for a surprise appearance by Don Was, performing his sneering mash-up tune “Read My Lips”—credited to A Thousand Points of Night—was, not surprisingly, disappointed.

President Obama had the good sense to be absent, though he did provide a video in which he praised Bush as “an inspiration and a true gentleman” and maintained, “There are few greater acts of patriotism than serving your fellow American.” How appointing Clarence Thomas to the Supreme Court achieved that went unaddressed.

Nantz, the CBS sports commentator, Peyton Manning commercial co-star, and occasional Bush 41 golfing buddy, was quoted by Houston’s KTRK as saying: “I think he really had a message in his presidency and it’s gone on and on and it’ll endure forever and that is a life without service to others is not a complete life.” The honoree himself couldn’t have jabbered it better.
Clinton got the evening’s biggest laugh by saying of his odd couple partnering with 41, “Barbara began to refer to me as her black sheep son.” Bush himself kept his remarks to a minimum, noting: “You’ve already heard from me on my view on this Points of Light thing.”

Leave it to W.—whose Decision Points is already being discounted by 46% at Amazon—to bring just the right mixture of lazy hyperbole to the evening. “In our great country, there are millions of points of light,” he said.