The “I inhaled frequently” President sounded like a relic at Thursday’s town hall, and the country can’t afford this attitude anymore. 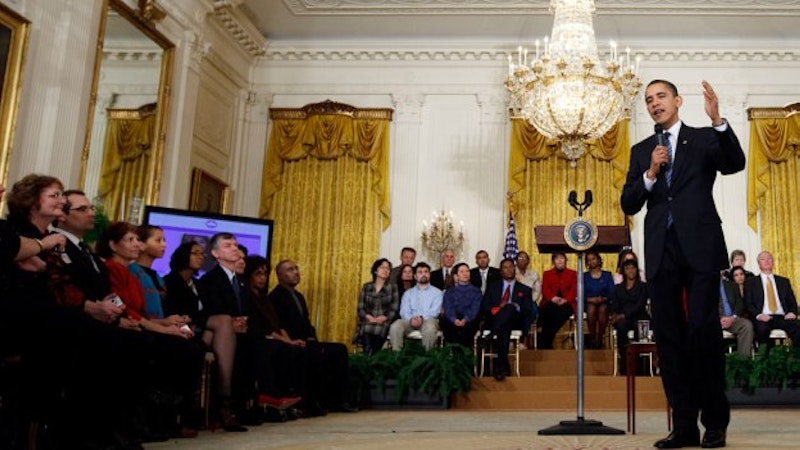 Had Barack Obama merely addressed the question of marijuana legalization with his trademark gravitas at the Open For Questions forum, the sane among us would likely have just grumbled and sighed, disappointed but not horrified. But Obama’s answer to the question was mired in the same outdated War on Drugs mentality that frames this issue as a Footloose-style quarrel between stoners and respectable citizens:

There was one question that voted on that ranked fairly high and that was whether legalizing marijuana would improve the economy [audible snickering] and job creation. And, uh, [Obama snickers] I don't know what this says about the online audience, [audience and Obama laugh] but ... this was a fairly popular question. We want to make sure it's answered. The answer is no, I don't think that's a good strategy [laughing and clapping] to grow our economy.
Politically, this is a staggering miscalculation by the typically savvy Obama; why on earth would you laugh at “the online audience” during the first online town hall meeting in presidential history? Have you forgotten who helped get you elected in the first place? And isn’t this the candidate who finally moved us beyond the ridiculous Clinton-era tap dance around this issue, stating in the debates, “I inhaled frequently… that was the point”?

As policy, however, this answer is outrageous. The justifications for legalizing pot are many and varied, from the unbelievable stress that the drug war places on our criminal justice and law enforcement systems to the fact that such policy has done nothing to curb marijuana use over the last decade; more people are going to jail for nonviolent crimes, while production of opium and cannabis have both doubled and the society-wide rate of use has remained at 1998 levels. But more importantly, the economic crisis and the recent escalation of gang violence in Mexico have punctured whatever puritanical groupthink bubble remains in place to prevent this legislation from changing. We literally can’t afford to waste money and resources fighting this worthless battle anymore.

Obama’s tone-deaf response came within 24 hours of Hillary Clinton’s statement from Mexico that “Our insatiable demand for illegal drugs fuels the drug trade.” Thousands of people have died in Mexico City as President Felipe Calderon tries to quell gang violence there; meanwhile, the U.S. has spent about $40 million annually over the last 10 years in its completely unsuccessful attempt to quash American usage. One would think—apparently even a Clinton would think—that the proper response would be to stop fighting a financially wasteful war against a phantom problem and instead find ways to separate American drug usage from the gang culture that currently and necessarily controls supply. This is no different from the agreed-upon need to free ourselves from reliance on foreign energy sources, and, as shown in Mexico, the security issues are equivalent—Obama will soon spend $725 million to bolster border security in response to the violence.

Even more egregiously, Obama laughingly dismissed what would be an instant revenue booster, at a time when the president should be willing to entertain any possible help in that area. A bill proposed by California state representative Tom Ammiano would legalize the sale and cultivation of marijuana for residents 21 and over, reaping an estimated $13 billion in the process. Not every state has the marijuana industry that California does, but imagine if even a fraction of such growth were to reach the other 49.

Obviously, Obama should feel free to defend a continued anti-drug policy if he sees fit. But laughing at the issue and rejecting legalization as he would a child’s request for more ice cream isn’t just bad politicking, it’s an indefensibly glib treatment of an issue that is literally a life-and-death matter. The cry for legalization has extended well beyond the pot-smoking community, and is no longer just a matter of users wishing to be left alone. (It would be a legitimate debate even if that were still the case, of course, but a little agreement from the square community only helps the cause.) For a great number of establishment writers and thinkers, this is no longer an outré issue of Prohibition-era “morality” versus societal degradation. Unless you’re Obama, apparently, who will likely turn out to be “on the wrong side of history” as the consequences of current American drug policy grow more costly and dangerous.