Oh, What a Lovely Recession 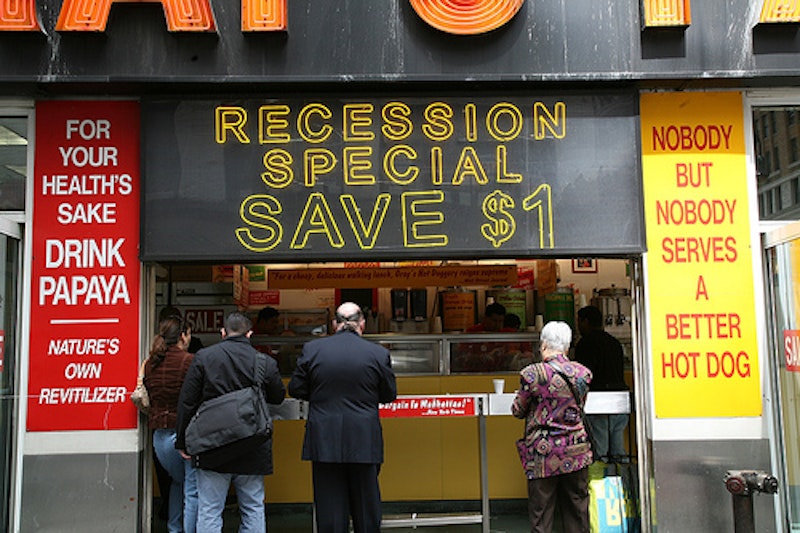 There’s presently a school of thought, mostly among the liberal intelligentsia, that the devastating recession has morphed from sheer panic to sour resignation throughout the nation. As a result, we’re now seeing the first wave of magazine and newspaper articles that assess the wreckage and grandly speculate upon the future of American society. This “first draft of history” is premature—in fact, the Las Vegas-tinged economy, where the rules are constantly changing, remains enveloped in gut-wrenching uncertainty—but I’m not an armchair sociologist with a sinecure at a prestigious university or think tank, or insulated by the downturn from inherited wealth or celebrity.

These pundits, left-leaning economists, and other designated “experts,” differ on the precise ramifications of the vanished “American Dream,” but the crux is similar: we’re entering a long, long era of reduced expectations and simpler way of life. Considering the sources—and academia is the epicenter—it’s not surprising that “Reaganism” is now a filthy word, Wall Street money-grubbers are and will be considered pariahs on the order of pornographers and ambulance-chasing lawyers, and high taxes are both necessary and desirable. An element of this commentary is the lingering resentment of the Bush years—the “stolen” election of 2000, Kerry’s loss in ’04, and the supposed philistinism of the former president—but the larger theme is, hey, we’re now in charge! Most of the writing expresses hostility to entrepreneurship and the commercial world, the belief that business, large and small, is somehow dirty, anti-intellectual, and brings out the worst in people. The underclass must be protected because it’s too fragile to be trusted to the greedy, corrupt upper class; a huge, benign government needs to steer such unfortunates in their private and professional lives.

Typical of this paternalistic mindset is the cover story of April’s American Prospect, “Less is the New More: Why post-consumer America could be a better place,” written by Cornell University economist Robert H. Frank, an out-and-out exercise in wishful thinking that’s not uncommon among self-styled “progressives,” who, between the lines, believe that the current financial collapse will ultimately be recorded as a positive paradigm shift. In other words, to use the catchphrase from Martha Stewart, one of the discredited icons of the “greedy” culture that purportedly began with Reagan, the continuing economic crisis can be turned into “a good thing.”

A central tenet of Frank’s essay is the advocacy for a “steeply progressive tax on each family’s total annual consumption,” one in which, for example, a wealthy person would pay a 100 percent surcharge to the government if he or she adds a “$2 million wing to [their] mansion.” Frank writes that taxes in general will have to rise more than what President Obama has outlined in his exorbitant budget, although aside from the standard cry for bilking the richest Americans (the amount of revenue generated by this alone won’t begin to cover the administration’s wish-list of spending programs), he skirts around the specifics of tax rates for the less affluent. He also, curiously, calls tax hikes “the third rail of American politics,” even though Obama wasn’t shy about this issue during his campaign and still won the election convincingly. Besides, I thought tampering with Social Security reform was the “third rail,” as well as immigration reform and legalization of gay marriage; that sure makes a lot “third rails” in politics. But I digress.

Frank also has, in my view, a warped and condescending (not uncommon in his circles) sense of how Americans relate to each other when consumerism is considered. While he claims it’s not a matter of “keeping up with the Jones’,” he writes: “[Traditional economic models] assume, preposterously, that an investment banker remains just as satisfied with his twin-engine Cessna even after learning that his Nantucket summer neighbor commutes to the island in a Gulfstream G200.” Talk about stereotyping. Frank’s “eat the rich” trope continues: “Even more striking gains would result from the [consumption] tax’s indirect effect on the expenditure cascades that have made life more difficult for middle-income families. If the rich spent less on housing, gifts, and other things, the near rich would spend less as well, and so on, all the way down.”

Translation: The United States is populated by envious sheep.

Kurt Andersen’s cover story in the current Time, “The End of Excess: Is This Crisis Good for America?” explores some of the same themes as Frank, absent the Father Knows Best hectoring. Andersen romps through life in America since the early 80s, the good and bad, opening his long article with the sentence, “Don’t pretend we didn’t see this coming for a long, long time.” That’s easy to say in retrospect, even if “The popular culture tried to warn us,” yet if you had polled a group of diverse Americans just one year ago, as the recession was starting to be felt, it’s very hard to believe that aside from a few stray Cassandras that many people, whether involved in finance, government, medicine, entertainment, media, charity work or education, would’ve have predicted the magnitude of this rotten economy.

In part, Andersen—successful novelist, journalist and talk-show host—is addressing his own crowd, especially with a paragraph like this one: “We don’t need to turn ourselves into tedious, zero-body-fat, zero-carbon-footprint ascetics, but even after the economy recovers, deciding to forgo that third car or fifth TV or imperial master bedroom or marginally cooler laptop will come more naturally.” On the whole, Andersen’s laundry-list article is by turns entertaining, astute and revisionist—although his donning of a hairshirt seems a bit false—but unlike the angry liberals who are gleefully projecting their own utopia of a strictly regulated, protectionist, Big Government, European-like (as if the U.K., Germany, France et al aren’t having their own problems) United States, Andersen is more reasonable.

Aside from the obvious (to all but the most left-wing) point that while storied institutions have failed or gone belly up in the past year, new entrepreneurs will take their place, to me, the key snippet in this piece is the key role that immigrants will play in America’s recovery. That is, if politicians allow this to happen. Andersen says, “The sooner we can agree on a coherent national policy to encourage as many as possible of the world’s smartest and most ambitious people to become Americans, the better our chances of forestalling national decline.”

Paul Krugman, on the cover of Newsweek now (in another cliché of more prosperous times, the Princeton professor, Nobel Prize winner, and New York Times op-ed columnist, is considered a “rock star” economist), isn’t as optimistic as Anderson. Then again, optimism isn’t in the man’s vocabulary. (I did enjoy the anecdote in Evan Thomas’ mostly puffy profile of Krugman, in which the Great Man says that he’s never met Obama and besides, at a press conference the President pronounced his name wrong.) Writing on March 27, Krugman longed for the days—even in the “go-go years” of 1960s bull market—back before Reagan when finance wasn’t glamorous but boring and small and “primitive,” when banks “attracted depositors by providing convenient branch locations and maybe a free toaster or two.”

Neat. Let’s return to the pre-ATM era, and, while we’re at it, that marvelous economy of the 1970s. The left doesn’t want to hear it, but once the recession does end, the country will need a fully-engaged, humming economy, and for that to happen it’s imperative that talented, business-oriented individuals lead the way. Government’s role is to be the umpire, not the shortstop, pitcher, and clean-up hitter all in one. It’s too early to tell whether Obama, at least if he wants to be re-elected, understands that the United States is a centrist country, and once the furor over AIG and TARP companies dies down, if he tacks to the left and embarks on a program of income redistribution, a Howard Jarvis-like populism will take hold and his “transformative” plans will be scuttled.