Barack Obama is on track for a clear victory over John McCain in November. His biggest obstacle is potential complacency among voters who’ve been overwhelmed by the self-interested media industry. 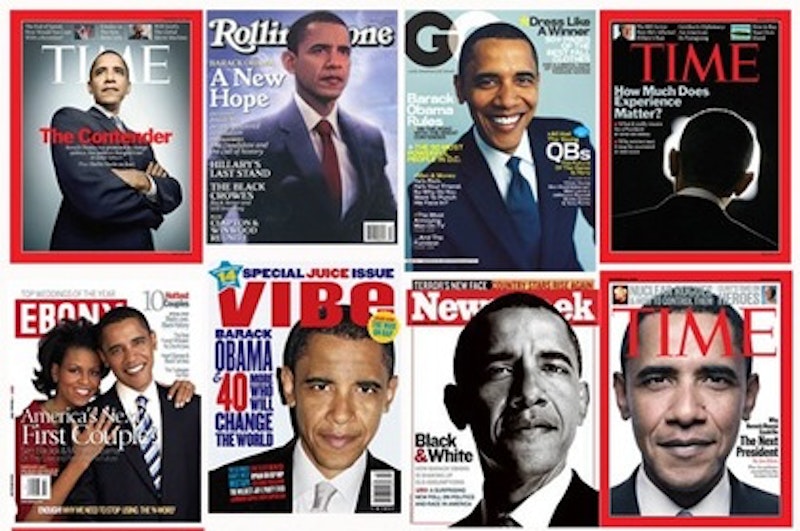 It’s not that often that I agree with Frank Rich, the popular New York Times op-ed columnist whose blur of pop culture and politics usually leaves me dizzy with disdain, but the opening to his Aug. 17 essay neatly encapsulated the media’s current zig-zag on Barack Obama’s campaign. I didn’t mind that the bulk of Rich’s column was a predictable attack on John McCain—the “Manchurian Candidate”—since his bewilderment at the hundreds of articles claiming that Obama is in danger of blowing the election was so sensible. Rich says that when he left for vacation at the end of July, the Illinois senator was leading McCain by several points in the polls, “and when I returned he still was. But lo and behold, a whole new plot twist had rolled off the bloviation line in those intervening two weeks: Obama had lost the election!”

Granted, the spate of polls published daily this summer is merely a snapshot of what the mood of a not-fully-engaged electorate is right now, but there’s no reason to believe that Obama has suddenly forfeited his formidable frontrunner status, no evidence that his extraordinary campaign team will repeat the disorganized, sullen and fractious effort of John Kerry’s four years ago. The only thing that’s changed in the presidential race since Obama defeated Hillary Clinton in early June is that the enormous political media machine has become bored, and when boredom sets in there’s bound to be a lot of rash speculation. Will the Clintons create dissension next week at the Obama coronation in Denver? Might the left-wing “netroots” sit out the election because Obama has modified his policy proposals a touch to reach centrist voters? Can his campaign withstand the negative advertisements of the Rove-inspired Republican strategists? Does Obama have a glass jaw?

Frankly, given the economic peril that most newspapers face today—with no signs of abatement—it would be fiscally prudent for management to trim the fat of their political reporting squads. As Jack Shafer noted in Slate last week, over 15,000 journalists will attend the Democratic and Republican conventions, all for what will amount to choreographed campaign rallies for each party. Shafer gets in this zinger: “Slate, I’m embarrassed to admit, is sending a team of eight to Denver and six to St. Paul. Attention! Donald Graham! We’re spending your cash like it’s Zimbabwean bank notes!” [Graham’s Washington Post Co. owns Slate.]

In reality, there are only three factors that could lead to an Obama defeat in November. First is what New York magazine’s John Heilemann wrote about at length on Aug. 10: racial prejudice. You can natter all day about the “post-racial” America of today, but that isn’t true: just ask Tennessee’s impressive Harold Ford Jr., who lost a close Senate election to Republican Bob Corker two years ago despite an overwhelmingly Democratic congressional landside, for his opinion on the implications of race. It’s a simple fact that millions of voters will tell a pollster one thing and then do the opposite in the privacy of the ballot booth. However, it’s almost inconceivable that Obama’s massive appeal to the youth, minorities and women won’t more than compensate for the number of white Americans who can’t abide the idea of a black president. Heilemann, quoted a “prominent Republican operative” who said, “[Race] is the thing nobody wants to talk about, but obviously it’s a huge factor.” Of course it is (and Republicans are cynically banking on it), but the groundswell for Obama that snowballed during the spring wasn’t an accident; a candidate doesn’t attract record numbers of people—in almost every state in the country—out of mere curiosity.

What should worry the Obama campaign more than race or negative attacks by McCain’s crew is campaign fatigue. It’d be swell to snap your fingers and have American presidential marathons morph into a modified version of the British six-week campaigns for prime minister, but that won’t happen any time soon, despite the probability that the electorate would welcome such a change. There’s too much money to be made, whether it’s television stations fattening their revenues with political advertising, the vast number of paid consultants for both parties, or the hunger of primary and battleground states for an influx of cash from the rash of reporters who stay at hotels, fill restaurants and pick up odds and ends at retail outlets.

This hurts Obama more than McCain simply because the former has attracted by far the most attention of the media, and thus runs the risk of overexposure and complacency from his supporters. Washington Post ombudsman Deborah Howell led her Aug. 17 column with this observation: “[Obama] has had about a 3 to 1 advantage over [McCain] in Post Page 1 stories since Obama became the party’s presumptive nominee June 4… [T]he disparity is so wide that it doesn’t look good.” Obviously, this isn’t confined to the Post, and, to some extent one can excuse the mainstream media: Obama’s candidacy is historic and he’s a lot more interesting than McCain, who’s already had his romance with the press in 2000 and has a run a dull, gaffe-ridden campaign. Like Bob Dole in ’96, McCain seems happy enough that he simply got the nomination; if by some chance he wins, well, that’s gravy. Still, there exists the possibility (slim but not out of the question) that come November voters who aren’t diehard Obamacans—Obamaphiles, Obamaites, whatever variation you choose—will be sick of seeing his mug on the tube and on the covers of magazines (Newsweek has been particularly shameless) and stay home.

The third way that McCain could win by default—and this is the least likely—is if some game-changing event occurs that raises the profile of the GOP. Who knows, maybe bin Laden has been captured and is currently residing in one of Dick Cheney’s bunker waiting to be sprung on Oct. 20. A terrorist attack on U.S. soil, maybe at a football stadium or huge mall would scramble the electoral equation, and probably not to Obama’s benefit. George Bush’s father could keel over, attacked by his heart, near the election and a wave of sympathy would temporarily wash over the nation.

It’s counterintuitive for a campaign to consciously turn off the media spigot, but that wouldn’t be the worst thing for Obama chief strategist David Axelrod to cleverly engineer. He should turn down more interviews from glossy magazines (which trivialize Obama’s seriousness about issues), limit access to the obscene number of reporters and columnists attempting to get exclusive interviews—and material for forthcoming books—and reduce the number of hokey photo-ops of the candidate at state fairs and chomping on wurst in Wisconsin.

It’s Obama’s race to lose, and if the Senator is as politically savvy as he’s demonstrated so far, once the convention’s over he’ll let his huge salaried staff and untold number of volunteers register more voters and prepare for the debates with McCain, which, given the GOP nominee’s penchant for petulance and botched facts, ought to pave the way for an eight-point victory and Electoral College wipeout.