Obama Has the Election in the Bag

…unless his base doesn’t turn out. 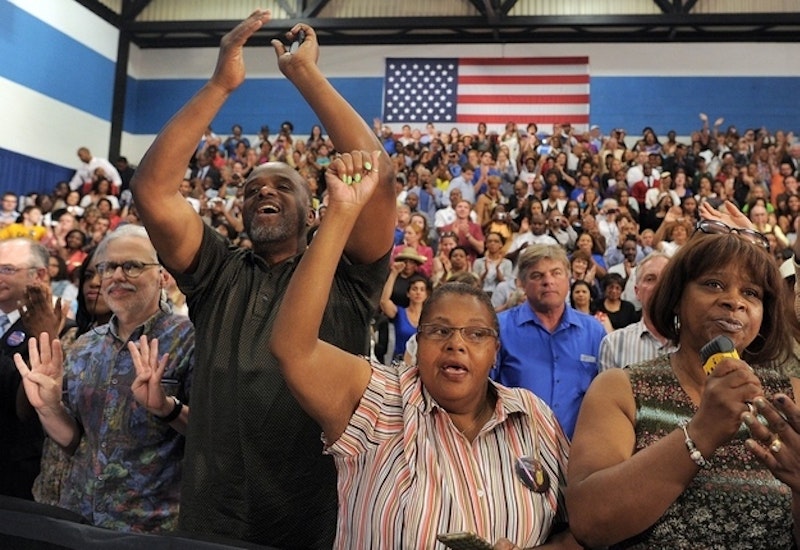 2012 is not 1980—and if Mitt Romney’s people think their guy will suddenly become the Great Communicator in October, they’re bruising for a rough loss. It’s been said a million times, but 90 percent of voters have already made up their minds, and they won’t be budging. Based on popular opinion alone, Obama has this one in the bag, and has for a while. He’s not wanting for likeability or favorability, and even if many Americans are disappointed with his disengaged, mercurial style of leadership, they’re certainly not eager to ditch him for Romney, a too-good-to-be-true distillation of the rich, powerful asshole with zero empathy who can’t even fake it.

Obama’s struggle will simply be getting people out to vote. If Obama loses, it’ll be because too many people thought to themselves, “Somebody else will do it.” Reliably Democratic voting blocs—students, urban minorities, and swaths of the white middle class—are often either too busy, distracted, or apathetic to make the effort to register and get out of the house on Election Day. The GOP knows this—it’s why you see absurd Voter I.D. laws proposed and passed in various states. Anybody with half a brain knows these laws are designed to disenfranchise Democratic voters with improper or expired I.D.’s, like urban minorities, the elderly, and the youth.

Fact is, voter fraud is not a problem, and it’s no accident it’s a confusing pain in the ass to register to vote. 2012 isn’t like 1980 because Romney isn’t five percent of the man Reagan was. He was already a walking punchline last summer. “There’s no question that on his best day, he’s not a Ronald Reagan,” [Reagan adviser Ed] Rollins said of Romney. “Traditionally incumbents don’t do as well in debates as challengers for the simple reason that challengers have to stand on the stage and look like an equal. Romney can do that, but Obama is good. He’s likeable. Carter was never likeable.”

Obama has many things working in his favor—a foreign policy record both Bushes couldn’t touch, wide personal favorability, a largely popular universal health care mandate, and an array of progressive social and economic issues that put him leagues ahead of his bone-headed Scrooge-like competition. Yes, Romney won’t win, but Obama could still lose, and another four years is far from a foregone conclusion. But if Obama loses, it won’t be because of Romney’s skills or lack thereof—it’ll be through dirty tricks like voter suppression, racist birther whispers, and blatant misinformation pumped through the veins of the GOP’s formidable propaganda machine.