It's no surprise that the city of soulless bureaucrats is filled with desperate, wild people. 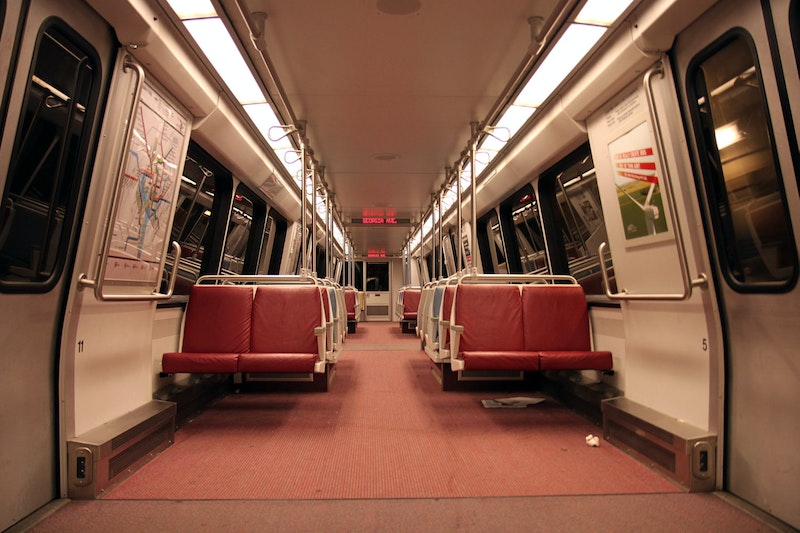 Another typical DC morning: I walk to Rosslyn (the neighborhood in Arlington, Virginia just across the Key Bridge from Washington, D.C.), from my little, almost unknown, neighborhood of West End (a tiny sliver of hotels, co-ops, condos, and doctors, between Georgetown, Dupont Circle, and Foggy Bottom) for McDonald’s coffee and then to wait for a bus up the hill of Wilson Boulevard to the next Arlington neighborhood, Courthouse.

A twentysomething foreigner asks me how to get to the Pentagon (at six a.m.?). I tell him it isn’t the bus I’m waiting for, but he can ask the driver when it arrives, and he should know which one.

The bus arrives and a homeless-looking psychiatric case with a five-foot long staff gets off, screaming at the bus driver and calling him "boy." They were both African-American, so no one called the police to report a hate crime.

The crazy (?) old man then stares at me, now in my seat, and eventually at a fat sleeping guy, telling us we are his witnesses. I try not to engage, but wonder if I should do something to get him to go. There are 20 people on the bus, almost all “working class people of color” who are going to be late to their early-shift jobs. They’re being held hostage by this man who may well be de-institutionalized.

Finally he becomes articulate. Apparently back in DC on Pennsylvania Avenue Afro-Gandalf had asked the bus driver if the bus went up Wisconsin Avenue to the Russian Embassy, and he'd heard "yes."

I felt for the crazy wizard, or would’ve if he weren't making us all late. I've had a few drivers drive past me when I'd been waiting forever. I once had one grasp his genitals through his pants suggestively and leer at me as I boarded (not the ride I was looking for).

Finally, Senior Psycho decided to fully get off the bus so it could leave, a nanosecond before a tall and athletic looking young Asian guy with a man bun—who knew there were male models on a six a.m. bus—came forward to push him out.

Things like this happen in the DC area fairly frequently. I remember once being in the Potomac Avenue metro on the outskirts of Capitol Hill, where a young and tripping man waiting on the platform screamed about how white people were devils and should be exterminated.

Once I was at the Bethesda NIH metro stop, waiting for a bus that terminated at Montgomery Mall, and another skinny, short and older African-American man kept trying to talk to me (he had a lame joke he wanted to tell) and to a young attractive black woman. Finally the bus came. I stood back to let the woman and the nut get on first.

The nut put his hand in a brown paper bag and said to the young woman as she boarded, "If you won't talk to me maybe you will talk to my gun." She instantly put her hand in her purse and said, "Well you get your gun and I’ll get out my gun and we will see who’s faster."

I was afraid the driver, who saw all of this, would pull away, leaving me with the nut and his (alleged) gun. But the gunslinger backed down and went away and I boarded and got home. I felt a little ashamed, like I should’ve grabbed him.

On the bus the young woman sat by a friend and they started talking. It was obvious from their accents they were originally from an African country. It became clear she was offended that this man thought he could talk to her just because they were the same color, though likely of different “classes,” and levels of sanity.

The Metro system is famously problem-ridden. This month the system had to sideline 60% of its rolling stock, its newest trains, when one derailed under Arlington National Cemetery. For years it’s been catching on fire, with passengers sometimes suffering smoke inhalation (one died of it). Passengers experience service interruptions, occasionally find human excrement on seats, are violently assaulted on platforms, and experience groping, especially when trains or buses are crowded. A few months ago I heard a chorus of women behind me scream “That’s nasty!” only to look up in time to see a woman (who I knew) get off the bus just as a young man stuck his cell phone under her skirt and snapped a picture. He was very practiced. She never knew it had happened.

The Washington Metropolitan Area Transit System (WMATA) is one of six mass transit systems (along with Boston, New York, Chicago, San Francisco, and Philadelphia) that receive 17% of the Highway Trust Funds from the gas taxes paid by people in Houston, San Diego, Richmond, Baltimore and less urban areas in the rest of the country. (Taxpayers think these gas taxes are paying for their local streets or at least for interstate highways.) It’s part of our mainly coastal Panem Capitol, though WMATA is mainly for their servants and not the ruling class.

But it’s also “public” or government property, which is often taken to mean anyone can use it for any purpose, with the only exceptions seeming to be parents who want to exercise control over public schools or Trump supporters who want to protest on Capitol Hill. But you can sleep, pee, poop, or scream in the bus or subway before anyone does anything about it.

The result—litter, muggers, sexual assaults, rats. The things one finds in public streets and alleys, and for that matter in “public” schools. And sometimes among “public” police. But you don’t find them as much at private spaces like shopping malls or parking garages.

It’s pretty clear what the solution is. Parents are beginning to homeschool, to re-enroll their children in private and parochial schools, and demand charter schools. Citizens are going to have to take moves to decentralize and privatize all the other government properties. Streets, sidewalks, police forces, and other goods and services currently managed by government bureaucrats need to be turned over to voluntary institutions—downtown business districts, neighborhood associations, for-profit companies and non-profit organizations—that are only funded if people want to support them and that are subject to open and free competition from alternatives.

It’ll take a while to get there since our ruling political class and their media spinners have never even heard of such a thing, though economists have discussed the benefits for decades. In almost any jurisdiction, you can find local politicians in the pay of the current transportation industry corporations that win all the government contracts for our failing government monopoly services. But I hope we’re in a revolutionary moment where we could see a lot of this swept away.