Because words mean whatever we agree they mean. 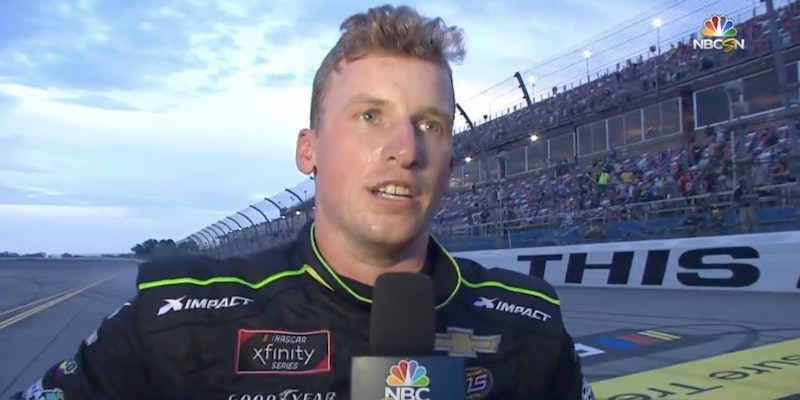 I get nervous when someone prefaces their remarks with "Unless you've been living under a rock..." I'm only too aware that I'm about to be exposed as a hopeless relic of last week. So I regarded it both as an insult and a truth when people started saying "Unless you've been living under a rock, you've heard the phrase 'Let's go Brandon!'" Rolling the boulder off my hole, I searched and was amused, just as Ted Cruz knew I'd be.

Showing that I'm out from under and have Googled: Early in October Brandon Brown, a relatively unknown driver, won a race at Talladega. As he was being interviewed, the surrounding crowd started chanting "Fuck Joe Biden," as NASCAR fans occasionally do. "You can hear the chants from the crowd," said reporter Kelli Stavast, possibly hoping to stave off FCC action, "Let's go Brandon."

Now, as the hashtags and memes circulate, some purport to be outraged, especially since the Brandon merch went on sale and Senators started wearing it on the floor. "Could the contrast be any greater?" asked The Washington Post's Dana Milbank. "Half of America’s leaders are trying to govern, and the other half are hurling vulgarities." Milbank’s known to be opposed to profanity, possibly also blasphemy. He dreams of a civil civic discourse: boring, of course, but clean as a whistle.

Milbank's long campaign against vulgarity in all its vulgar forms has been inspiring. But if it involves getting a handle on expressions such as "Let's go Brandon," he's got a deep furrow to hoe, as it were.

I’m in favor of vulgarity and profanity; you can't deny that that shit is fun. However, the sentence "Let's go Brandon" is not vulgar or profane. It’s about as bland and nice as an expression in English can be, which is why it represents a linguistic innovation, a poetic masterstroke. It's a graduation sign on an exurban front lawn or an appreciative chant for the high school quarterback. If you tried to ban it, or kick people off Facebook for using it, you'd be trying to ban Brandon's Aunt Monica from rooting for the Bumfuck Ocelots. If you're ready to prohibit “vulgarity” (that is, talking like the common folk), and you consider "Let's go Brandon" vulgar: well, what don't you propose to ban?

Language is hard to control, because the meaning of words is conventional. Words mean whatever we can agree they mean, and often children enter into agreements with one another to use ordinary words as a code. All that's required for us to use "Let's go Brandon" to mean "Fuck Joe Biden" is that each of us knows the other is using it that way. Absolutely any phrase—for example, Babalu—could be used to mean "Fuck Joe Biden." This indicates that "Fuck Joe Biden" is unbannable, because language is amazingly flexible.

It's easy to avoid vulgarity in a variety of ways while perpetrating ridicule or insult, though the Milbanks of the world, with their hermeneutics of suspicion, will find you out eventually, driving you to further creativity. If, on Twitter, I tell Biden to blow me (not that I would, of course; Biden is beautiful), I might get deleted for vulgarity. But what if tell @POTUS to fellate me? The term “fellatio” isn’t even described as vulgar in the dictionary: it’s a perfectly respectable, upper-middle-class, Latinate term. Ban that one and I'll go on to the next or start making up words: I'm going to make it clear eventually what I mean. It’ll be a long chase before you can sequester the vulgarity.

One can avoid vulgarity by mere pseudo-formality: even Biden isn't a big enough asshole to try to ban the word “anus,” for example. Or one can twist the euphemism of today back into the abuse of yesterday. You might want to try this yourself, because I don't think either side is really ready to repudiate the insult. It would be wrong, for example, to describe Kevin McCarthy as a dolt, an idiot, or a cretin. But, like so many people, he faces very real intellectual challenges; he's quite differently abled.

The Chinese state, which runs the most thorough social media censorship regime in the world, doesn't like insults directed at its leader any more than Dana Milbank. But even in a situation where one should assume that every word is monitored and in which the price of dissent is high (anything from a hit to your "social credit rating" to imprisonment), the censors spend all day chasing down euphemisms and code words. It took them a minute to figure out that "Winnie the Pooh," for example, and "Baozi" (steamed bun) were being used to refer to Xi Jinping,who is apparently a bear or bun of very little brain.

So Winnie the Pooh is off social media, but I imagine that fresh, seemingly arbitrarily-chosen terms for “Xi Jinping” are arising all the time. It's enough to make a censor paranoid: is this thing running across my screen an innocuous remark about nothing important, or a terrible subversion of state authority? It's impossible to tell just by looking. There are only two solutions that occur to me: ban all communication, or give up trying to control it.

Meanwhile, we can all draw inspiration from the way their veteran quarterback is leading the Ocelots, even through this winless season. Rock on, Brandon!