No Reform For Old Men

Why Joseph Lieberman’s obstinate rejection of the public option, and any compromises, is in some ways worse than Republican opposition. 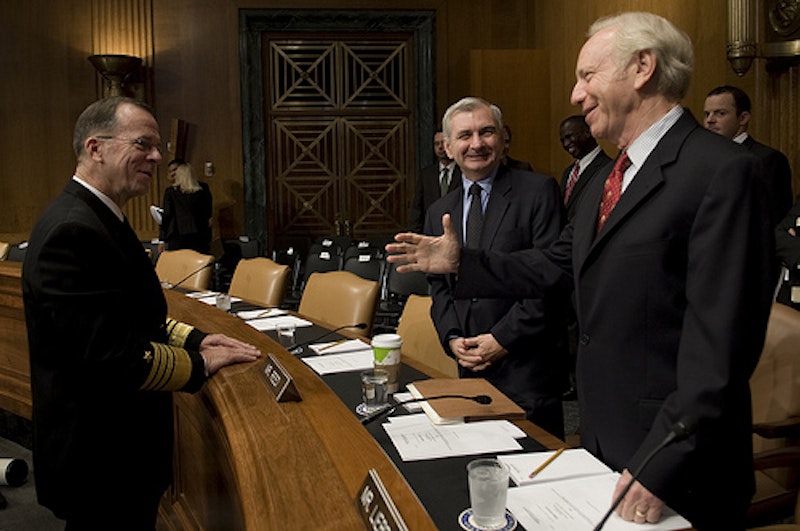 Chairman of the Joint Chiefs of Staff

The push toward health care reform entered into a new phase this week. Senate Democrats struck an as-yet undefined deal on the public option, essentially dissolving it with mandated non-profit insurance options and the lowering of the age for Medicare eligibility from 65 to 55. Though the Congressional Budget Office has yet to score it, liberals such as Howard Dean are nodding their approval. Indeed, early liberal debate over the scope of health care reform was in part defined by the expansion of Medicare—an existing public option for the elderly and retired that is also one of the more efficient carriers in terms of administrative costs.

Negotiations have been marred by Congress’ hyper partisans in general and obstinate Senate Republicans in particular. But Harry Reid and the Senate Democrats’ biggest challenges have been keeping moderates at the negotiating table. Finance Committee Chairman Sen. Max Baucus (D-MT) was the health care debate’s first prime time player. After President Obama called for health care reform bills from the House and Senate, Baucus’ committee was the last to finish. The bill that emerged was important in two aspects: It did not include a public option and it was deficit neutral—indeed, it would help pay down the deficit over 10 years and possibly beyond. Liberals weren’t pleased, but the cost-saving measures in Baucus’ bill have stayed as the bedrock for the overall reform package.

Sen. Olympia Snowe (R-ME) was next to take center stage. As a moderate Republican—from New England, no less—she was and is assiduously courted by the White House: a vote from her is an important (if token) victory for bipartisanship in a debate that has seen anything but. Also on the Finance Committee, Snowe has positioned herself as someone who, though resistant to the more liberal aspects of the bill, specifically the public option and any subsequent triggers, is at least willing to come to the bargaining table and talk policy. I can respect that while disagreeing with her.

But what I can’t respect—and find increasingly intransigent—is the posturing we’ve had to endure from Sen. Joseph Lieberman (I-CT). He has once again forced his way into headlines with his loud-mouthed blanket opposition to anything resembling a public option. No triggers, no opt-outs, no opt-ins. If anything Lieberman knows how to stand athwart the news cycle yelling “Stop! Look at me! I have important objections!” What you haven’t seen, or read or heard is anything related to Lieberman’s actual position on health care. We see only process piece after process piece, and in this one you can see that Lieberman concedes that a public option saves money. No matter.

It’s been postulated that Lieberman is still upset over the embarrassment of 2000 and the need to run as Independent after his Democratic primary defeat in his 2006 reelection campaign, that he is a consummate opportunist (at least, more so than the rest of the Senate). Regardless of his motives, he has disparaged the back and forth such massive reform requires, drawn a line in the sand over a public option that a vast majority of Americans support—evidence of his bald manipulation of the political system to further his narrow, self-fulfilling motives.

Eric Martin, at Obsidian Wings, roped together a few links that show just how startlingly this particular episode of Lieberman intransigence is. The first is a quote from 2006:

"I have long supported the goal of universal health care," Lieberman told reporters. "Ned Lamont can talk about it. I’ve been doing something about it all the time I’ve been here.”

For close to a decade, [Lieberman] got nearly perfect scores from the American Public Health Association, which backs a single-payer health-care system, and in lieu of that, the “public option.” Now, all of a sudden, he’s so outraged by a public option that he’s threatening to filibuster any bill that contains it. The arguments he makes on behalf of his new position are remarkably weak: He says the public option will raise costs, even though the Congressional Budget Office has said no such thing, and even though logic suggests that by competing with private insurers, a government plan will actually drive costs down. Some have accused [Lieberman] of shifting right in order to win backing from the insurance industry in preparation for a 2012 reelection run. But, in fact, he gets relatively little insurance money, and Connecticut politicos mostly think he won’t run.

After the 2008 election, in which Lieberman campaigned for Republican nominee John McCain, many on the Left were incensed when Obama and Reid brought him back into the Democratic caucus, seniority and committee positions intact. I was not one of those, as I’ve felt that, despite the maddening inconsistency with politicians such as Lieberman and Sen. Arlen Specter, the Democratic Party is fast becoming the only big-tent party for moderates (there has been talk that Snowe could be switching parties if her consistent-but-tepid support for health care reform is enough to inspire a Doug Hoffman-style candidate).
Do I still believe that? Yes, though with the caveat that Lieberman has brought nothing to the table other than his own soap-boxing. If Reid’s nose count is at 59 up until the last minute, he can still use the problematic option of reconciliation, wherein health care reforms are rolled into the budget and thus only require a simple majority vote. If that happened, I wouldn’t be surprised if Lieberman is finally relegated to the backbench—not for refusing to blindly toe the party line, but for refusing to dignify the legislative process with actual debate and the admission that it’s not all about him.