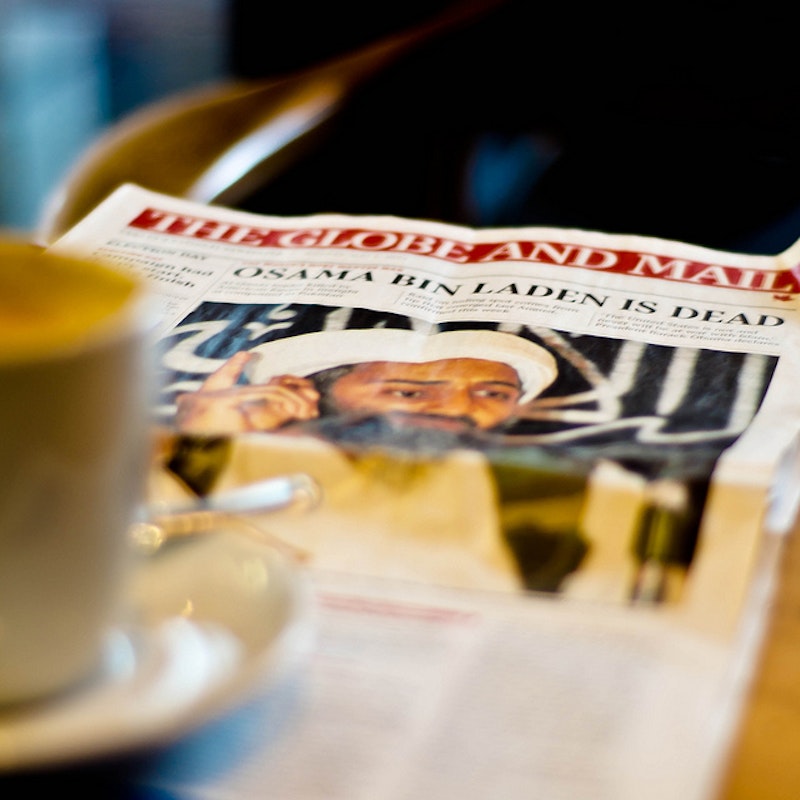 A few hours before President Obama announced Bin Laden had been killed, I happened to drive past Ground Zero and was delighted to see tangible progress at rebuilding the towers. When I was a little boy, I loved skyscrapers and collected souvenirs of the Empire State Building, the Sears Tower and, of course, the World Trade Center. The day my mother took me to visit the Twin Towers was one of the most thrilling of my childhood. The vast size of the structures was overwhelming; I could barely see the top and felt a sense of awe and wonder.

When the Twin Towers collapsed on that awful September day, I was in high school and largely ignorant about the world. I received the shocking and traumatic events with all the innocence that comes naturally to a child who accepts Western propaganda. Clearly, we were attacked by a bunch of ruthless psychopaths, under the command of Osama Bin Laden, who hated freedom and democracy. Anyone who suggests that America’s foreign policy drove the murderers was a treasonous liberal. And I could not understand why some people thought there was a connection between Israel’s building settlements and the attacks.

Fast-forward to the day after Bin Laden was killed. I interviewed an Egyptian cab driver who requested anonymity. He was wearing a green cap and had big, searching eyes. I told him I’d just been to Ground Zero and was eager to hear his take on Bin Laden’s death. He was very friendly in general, but it took him a little time to feel comfortable enough to speak freely about Bin Laden. “This is just gonna inspire twice as many people to attack America,” he eventually asserted. The problem is not Bin Laden, he explained. The problem is the American government’s behavior. Most Muslims he knows disapprove of Bin Laden’s tactics. They think his actions have only exacerbated their suffering. But as long as America continues its post-World War II imperial conquest of the Middle East by installing oppressive regimes through financial and military aid (Egypt, Saudi Arabia, etc.), waging economic warfare and state terrorism against those who do not follow orders (Iran, Gaza, etc.), along with outright war (Iraq, Afghanistan) and so long as it maintains its shameful treatment of Muslims in America there will always be a strong sense of hopelessness, outrage and resentment, which will drive many into the hands of al-Qaeda.

“But doesn’t the recent removal of Mubarak change anything?” I asked. He explained that it does not because Mubarak, just like the Egyptian military, which is formally in control right now, was merely a puppet for America. It makes little difference who’s technically in charge because what America says, goes.

And there’s no escaping this harsh reality for Muslims, according to the cab driver. Certainly not in America. Some of the horror stories he shared with me were shocking, even though I had been familiar with the mistreatment of American Muslims.

In one instance, a woman crying on the street approached his car and asked if he could help her. She’d just received a phone call that her house was on fire, and she had no money. Could he give her a ride? He told her to come in. A few minutes later a cop pulled him over, even though he had not violated any traffic rules. The officer started asking questions and demanded to see paperwork. He inspected the driver’s passenger log and accused him of not listing the woman in the backseat, which is technically illegal. The driver and the crying woman tried to explain that she was not a passenger, but that her house was on fire, and he was doing her a favor. The officer nonetheless wrote him a ticket for failing to record her trip.

The cab driver showed me a legal document the woman and her lawyer drew up establishing the full context of the situation and advocating for justice. When he appeared in court to fight his ticket, the cop who showed up was not the same man who wrote the ticket. Nonetheless, the judge accepted the proxy witness’ testimony and refused to allow the cab driver to even read the document he had brought with him, instantly declaring him guilty. Shortly after, the cab driver approached the officer who bore false witness and asked him why he lied. The cop told him “Get the hell out of here or I’ll lock you up.” The cabbie later visited the captain of his local precinct in pursuit of legal recourse. The captain seemed sympathetic, but said there was nothing he could do because the judge ruled he was guilty.

The cab driver explained to me that this is routine. He showed me a folder filled with tickets. He said the cops on his driving route know him and abuse him because they can take advantage of Muslims. They follow him. They pull him over on a whim. Sometimes one officer will write him a ticket and sign the name of an off-duty colleague to make it appear as if the latter was doing his job. “I can’t pay off these tickets,” he told me. “I don’t make much money, and I’m afraid they’re gonna send me to jail.”

I asked him how life in America compares to growing up in Egypt under Mubarak’s rule, as he moved to the States during the 1990’s, when he was in his 20s.  He said that on a scale of one to 10 of oppression, with 10 being the worst, Mubarak was a nine.  America, in his view, is at best an eight. “You see these gray hairs?” he asked after removing his green cap, “I’m not old, but every time I get into my car to do my job I’m always on the lookout for cops.” Mubarak’s regime was oppressive precisely because the police and military terrorized the population. If you’re a Muslim in America, things are barely different, he said. “When I moved to America,” he added, “I believed this was a great country with freedom. Now I tell all my friends and relatives in Egypt don’t come here. It’s a lie.”

My grandfather recently died, and lately I’ve spent much time reflecting on his American experience. In his memoir, he calls America the Goldeneh Medina, or the golden land. After spending years on the run from the Nazis during the Holocaust he finally came to America, and his lofty expectations were fulfilled. He created a successful business, rebuilt his family and lived in freedom.

Like my grandfather, I have always experienced the positive side of America. And so when the Twin Towers collapsed, I took it accordingly. Like most Americans I was utterly confused by the pervasive question of “Why do they hate us?” I took it for granted that Bin Laden masterminded the attacks and desperately wanted to see him brought to justice.

But by the time that finally happened, my worldview had been dramatically transformed. Many prior assumptions have proved false. There is good reason why Muslims hate America. And it’s not because they despise freedom and democracy. Furthermore, according to the FBI’s longest-ever investigation, there is “no hard evidence connecting Bin Laden to 9/11 [http://www.globalresearch.ca/index.php?context=va&aid=2623],” which may have been planned in the United Arab Emirates and Germany.

So was there no satisfaction for me the day Bin Laden was killed? There was. Although I know that, as former head of the CIA’s Bin Laden unit Michael Scheuer has argued, many Muslims understandably perceive Osama as a Robin Hood-like freedom fighter resisting American empire, the man was a mass murderer and a war criminal. Even if he may not have orchestrated 9/11, he certainly bears responsibility for the 1998 bombings in Africa among many other attacks, and he inspires millions to commit atrocities. But in order for us to restore the spirit of the World Trade Center and decrease the likelihood of another attack, much self-reflection is required.