The “revolutionary” tablet newspaper is losing millions, but does it matter? 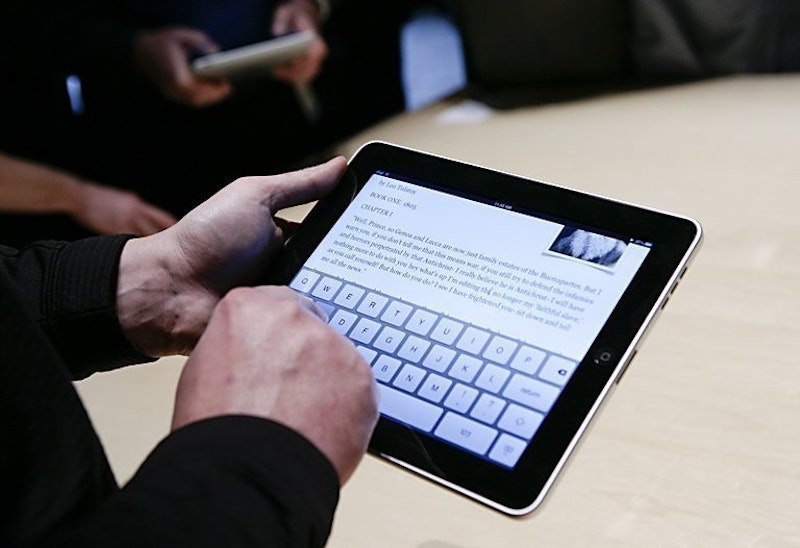 Heard anything lately about The Daily? You know, the iPad-only news app from Rupert Murdoch’s NewsCorp? The one that was going to revolutionize journalism as we know it? The one that would break news on a regular basis, and leave everyone agog over its content and effortless way of pointing to the future of news?

Actually, that’s not true. Just yesterday came news that The Daily had lost $10 million during its first quarter. NewsCorp president and COO Chase Carey made the announcement during an earnings call, growing “mildly agitated,” according to AdWeek, when someone had the temerity to inquire how many people with free subscriptions had been converted to paid subs. “We’re only a month into this,” Carey remarked. (The Daily actually launched on Feb. 2.) Carey went on to declare that the company is “not going to build this in a fishbowl,” and that it plans to continue tinkering with the product, as it involves “a lot of moving parts.”

The Daily’s launch was something of an ongoing joke in media circles, with various dates announced and then amended, especially during a particularly whiplash-inducing pace in January. Since then, The Daily has reportedly succeeded in recording some 800,000 downloads, though, as AdWeek notes, the company doesn’t feel obliged to share a breakdown of paid subscribers. “This will be a very different business a year from now … and will continue to evolve,” Carey declared, hopeful to the last.

(Murdoch’s major American publication, The Wall Street Journal, has an average daily circulation of 2,117,796, followed by USA Today at 1.829 million and The New York Times at nearly 917,000.)

That 800,000—which may or may not represent regular readers of The Daily—doesn’t include a single person that I know. And given the reviews it’s received, that’s not too surprising. “The content and outlook of the six different sections suggest that The Daily is aiming to be a generalist news roundup-in-very-brief, for people of both sexes who somehow don’t get to read the news elsewhere,” raved the site Magtastic Blogsplosion. “A breakfast read, let’s say, for those who want short, fast snippets to talk about at work. Almost like cable news, in fact, except that cable news already exists, and does it better.”

London’s Guardian enthused: “At the moment, it feels in places more like a newspaper created by a slightly dull committee rather than something with the kind of personality and viewpoint that truly great publications have,” while The Telegraph cheered that it represents “a complete failure of imagination.”

Well, they would, wouldn’t they? After all, you don’t go around talking up the putative competition in a manner designed to push readers towards it.

Still, the price is right … right? (Especially if you’ve got one of those free subs.) Visitors to thedaily.com are offered two free weeks, followed by a pay-as-you-go plan of 99 cents a week or $39.99 for a year. At a quick glance that may sound like a bargain … until you come to your senses and remember that CNN, MSNBC, and most major newspapers (WSJ and NYT famously excepted, of course) make their content available for free.

But even ignoring that obvious fact, you’ve got to wonder about the business model. The Daily reportedly cost in the neighborhood of $30 million to launch; assuming all 800,000 of those downloads were of the 99-cent variety—which they most assuredly were not—that means the company brought in $800,000. Throw in the costs of start-up and ongoing production, including salaries (this ain’t the Huffington Post)—and it’s small wonder that The Daily just lost $10 million. In fact, it’s impressive that the loss wasn’t greater.

What makes a newspaper, digital or print, is its ability to break news. In this regard, The Daily has failed almost entirely. I can’t think of a single story the paper’s broken, and from what I’ve read, there’s been little in the way of reactive pieces or analysis that’s been vaguely thought-provoking, much less crucial. Recent editions have of course been topped by Bin Laden news, but the coverage hasn’t been compelling: “Inside Osama’s Secret Life: Mansion stocked with pricey shampoo, Coke, ice cream, 23 kids—and rabbits galore” trumpets front page from this week, which isn’t going to give many hardcore readers pause. A feature was headlined: “Osama iPad Front Pages: Who Did It Best?” As only one of the four examples given was designed specifically for the iPad, guess who “did it best”?

Much was made about the credentials of The Daily’s poaching of editorial talent: Editor-in-chief Jesse Angelo was (and apparently still is) executive editor of the New York Post, whose former Page Six editor, Richard Johnson, also came on board as its most high-profile hire. Sports editor Chris D’Amico was managing editor at the Newark Star-Ledger; publisher Greg Clayman was a suit at MTV; and lifestyle and culture editor Sasha Frere-Jones has been The New Yorker’s pop music critic for six years. If, like me, you thought The New Yorker would now be free of Frere-Jones’ overwritten, pedantic twaddle, think again: Like Angelo, he’s still keeping his “regular” job—hardly a vote of confidence in The Daily.

None of this is to suggest that The Daily is necessarily going away soon. Murdoch has unimaginably deep pockets, as the continued existence of the Fox Business Channel demonstrates. Overall, NewsCorp.’s third-quarter earnings dropped 24 percent, it was announced this week. That kind of nosedive would probably give most moguls a heart attack, but it’s all in a day’s work for Murdoch; after all, quarterly revenue for the period dropped to from $8.79 billion to $8.26 billion. That’s the kind of poor showing we could all use.