Standing up for stand-up and free speech. 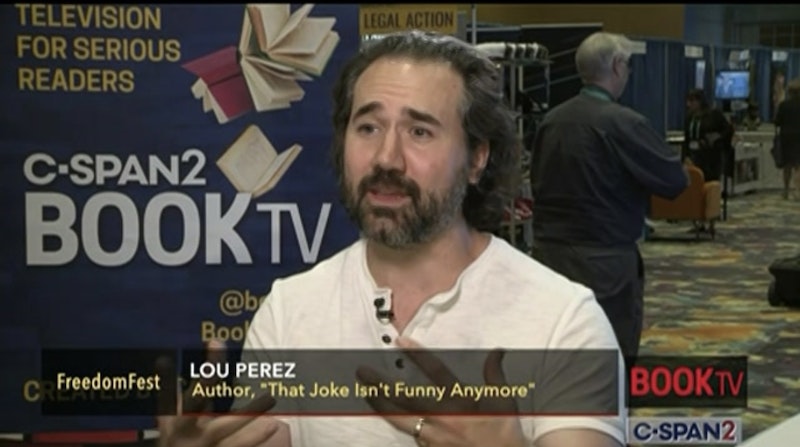 Joe Biden’s speech last week didn’t contain too many laugh lines, aside perhaps from ones designed to make historians of the American Revolution chuckle at his ignorance, such as: “We cannot be pro-insurrection and pro-American. They are incompatible.” Ha!

But he’s probably wise to keep his speeches as dark and dire as that red-lit stage on which he spoke. It’s comedy that really upsets people lately, not authoritarian political rhetoric. Witness the online ruckus the Libertarian Party of New Hampshire suffered last month—so soon after the national party’s slight shift to the right—when its official Twitter account attempted… a Holocaust joke.

Or more like a Holocaust-adjacent joke, since (and I care enough about logic, morality, and the art of comedy to insist this matters) the tweet wasn’t dismissing the topic of Nazi mass murder but rather mocking the glib way that leftists sometimes leap from stating their latest policy preference to calling opponents of that policy fascists. “Six million dollar minimum wage or you’re anti-Semitic,” read the parodic tweet, for good or ill.

Tasteless maybe, not right for a political party’s messaging apparatus most likely, but only liars or dimwits take wisecracks like that to be actual pro-Nazi lines. Indeed, critics are reversing the intended moral valence of the ironic words to convince themselves their outrage is warranted.

Lately, those sorts of liars and dimwits spend a lot of time criticizing stand-up comedy, too. Enter comedian Lou Perez (abruptly), author of the new book That Joke Isn’t Funny Anymore, about the woke war on comedy and by extension on all things unplanned, experimental, and slightly dangerous.

Perez is an exhilarating reminder of what sane people sounded like before social media, pronoun obsessions, and plague paranoia destroyed most Americans’ minds, leaving them tragically incapable of appreciating comedy or life—especially in New York City, where he was living before writing the book. Without hatred or pettiness but with many laughs, Perez shows how that which parades itself as “tolerance” is often just another excuse to make one’s fellow humans miserable, sometimes while advancing one’s own career.

(The culture has moved so far to the left that this book might now get “canceled” just for having a cover photo resembling one from a Smiths album, since their lead singer Morrissey, though a gay vegan immigrant musician who hates Margaret Thatcher, has recently been criticized for his wariness of Islam. It never ends. But if Morrissey himself reads the book, he might like the chapter defending Charlie Hebdo, or the oddly frequent jokes suggesting Perez is bi-curious.)

It’s good to be humane and civil, and I think Perez is, but it’s also good, as we knew but a short time ago and as he remembers, to give artists, comedians, and for that matter everyone else some room to play before getting screamed at.

The most stealthily creepy and joy-killing of the woke, including many a cold-blooded “intersectional” analyst in academia, aren’t just annoying. Their crusade has real costs, often absurd ones, as Perez recounts, such as destroying the long-popular and influential New York comedy troupe the Upright Citizens Brigade, which was very liberal and multi-ethnic right up until the woke decided to target the operation and smear it as a factory-like system of exploitation because—get this—too many of its non-white performers quickly vanished to go have careers in Hollywood. The cruelty!

Once in Hollywood these days, creative types will find things just as woke and insane as they are here in New York City, with prominent liberal figures signaling their fondness for both interpersonal and state violence, so long as its cause is righteous. Ditching a traditional liberal history lesson about free speech, Patton Oswalt now says imprisonment likely made his censored fellow comedian Lenny Bruce a better man. At least two famous comedians have been physically attacked while onstage lately, and neither incident resulted in serious charges, which means it may not end there. Some people hinted Chris Rock deserved it when Will Smith slapped him onstage for insulting Smith’s wife via a joke.

To prevent more violence, it’s time the culture stopped falling for the woke’s passive-aggressive nonsense. Every time the woke pretend to be far more hurt than they are, they prime the culture to accept their next violent “counter-strike” as justice. You unknowingly stayed at a hotel owned centuries ago by a slave plantation? Have some arson in response!

The scolds may get a chance to criticize stand-up and the Libertarian Party simultaneously in a couple years if comedian Dave Smith runs for president on that ticket. I once saw him vow to stay onstage longer than planned simply because some leftist heckler in the audience shouted at him to get off.

Then again, at least one paranoid Twitter user who has abandoned the Libertarian Party thinks the organization has moved rightward and toward Don Rickles-like insult comedy simply to ready itself for direct takeover by the nation’s most powerful insult-comedy political figure, Donald Trump himself, in the event the man is snubbed by the Republican Party in 2024 and needs a fallback plan with 50-state ballot access. (Smith has said he doesn’t think the Libertarians should run a candidate against the GOP if the latter party is wise enough to nominate DeSantis, which is shocking enough, but I don’t know exactly where Smith would stand—or stand aside—on Trump, who, like DeSantis, is plainly no libertarian.

Anyone who’s been around the Libertarian Party for decades, though, knows it’s not a reliable, safe, or predictable fallback plan for anyone, so I doubt this is the master strategy—but it will make all our lives more interesting if it is. In the meantime, with the Mar-a-Lago raid evidence piling up (whether it’s damning or just a big heap of bureaucratic papers Trump hadn’t finished shuffling), Trump manages to bring at least a subset of the U.S. population laughter by doing things like spending a recent morning tweeting QAnon references such as the slogan “Where we go one we go all.” Beats Holocaust jokes.

Comedy can admittedly veer into political recklessness, though, and funnyman/far-right activist Gavin McInnes—founder but no longer head of the Proud Boys—probably made the world slightly more volatile and dangerous (if anyone was paying attention) with his apparently faked on-air arrest on August 25. That stunt pissed off an even weirder political commentator, (the arguably-anti-Semitic yet himself Jewish) Owen Benjamin, who outed the arrest as a prank. Regardless, McInnes fans took pains to note he had emphatically opposed the J6 riot, that presumably being the reason for his “arrest.”

While all that was going on, irresponsible as it all may sound, Biden, the (probable) actual current president, was making weird wisecracks of his own about how easily the federal government’s fighter jets could defeat gun-wielding rioters if any tried to take it on. That sort of remark, coming from an actual office-holding political leader, arguably matters more than a few fans griping about, say, conservative comedian Steven Crowder getting ousted from YouTube.

Let the comedy people have their laughs, arrest the actual violent people, and peacefully deny the reins of government power to anyone who sounds overly fond of using them aggressively. Seriously, a non-ludicrous society should be able to manage all three.