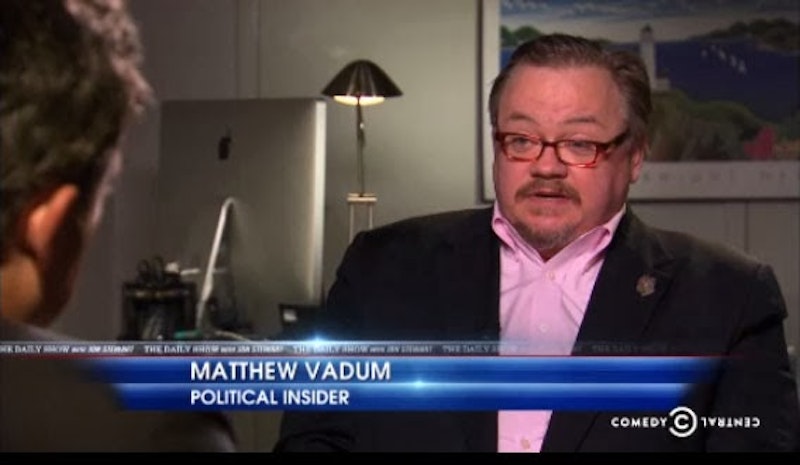 “That's a good question,” Matthew Vadum said. Silence followed. He had been confident a moment before. Jason Jones, The Daily Show correspondent, had told him that a right-wing political candidate in Iowa was mad because the Koch brothers had dumped a lot of nasty and untrue advertisements into the candidate's race. The ads were against the guy's opponents, but 1) he didn't like the falsehoods, and 2) he lost, very badly. He thought the Koch brothers should mind their own business. What did Vadum say to that?

“Then he's taken the wrong lesson from this,” Vadum said, intonation up. And what lesson would be correct? Thoughtfulness erupted on Vadum's part, a thoughtfulness marked by intermittent but intense silence. He broke the silence once, with his observation about the question's high quality. “The right, I would say the right lesson...” he added. He stopped. He broke the silence again. “Let me think about it for a moment,” he said. Jones said, genially, “Take your time.” The silence returned. At last Vadum came out with this: “There's nothing he can do about another group coming in.”

His interviewer seized on that thought. “There you go, you're [bleep]ed,” Jones said. Jones did a Jersey wise-guy tilt to the mouth, right side almost as high as his nose. “What are you gonna do?” he threw in. Vadum responded to that the way a newborn chick follows anything that might possibly be its mother. “What are you going to do?” Vadum said. “Forget about it!” But he didn't say it in a Jersey voice, luckily. He sounded more like a guy at the office who seeks the exit out of a banter exchange and thinks he just found it.

Matthew Vadum is a “conservative author and polemicist,” according to The Week.com. He wrote a book called Subversion, Inc. with the subtitle How Obama’s ACORN Red Shirts Are Still Terrorizing and Ripping Off American Taxpayers. “Still” is a key word because the book came out in 2011, a year after ACORN went belly up.

Over the past dozen years I've seen Vadum bob up here and there. He was even on The Daily Show once before, saying hot things about community organizers as dispensers of crack. In the segment's voice-over, Jon Oliver called him some bleeped-out word. Worse, Vadum had smiled at Oliver during their interview, a naked twitch of a smile; he'd been confiding how some left-wing activists had called him that very word. He thought Oliver would sympathize with him. Now he's back and playing tackle dummy to Jason Jones.

Laura Ingraham doesn't have to sit on the wrong side of the microphone while some Daily Show banana makes her look like a chump. She has options. For a schlepper it's different. He'll take the treatment two times running, he'll take whatever. Basically, he's made a mistake; his career strategy hasn't panned out. He can't think on his feet, and his resume's crown jewel is a book that was out of date when it was published. Physically at least, Vadum finally looks like he's past boyhood. When he was telling Jon Oliver about community organizers and crack, I think Vadum still had the conventional glasses and part in the hair of any young fellow with jowls. Now his hair has some silver and he's trying for gravitas. He could be a man, except that emotionally adult people don't grow a little mustache and beard and wear them with narrow horn-rims so they can look owlish. They don't contrive to look like an off-brand G.K. Chesterton, a G.K. Chesterton who's sitting in a drab space with a camera and Jason Jones and has just realized that he doesn't know why the Koch brothers ought to dump their shoddy, counterproductive, bullshit ads into local races.

Somehow he thought the matter could be solved with “Then he's taken the wrong lesson.” The saddest thing is that Vadum gave the line a bit of vim, a hint of impatient confidence. For that moment he seemed set, just about. The muscular mind of the conservative was about to flip the situation over and reveal a hard truth, one that liberals want to ignore; possibly the lesson had something to do with the riptides of a free economy, the need to develop character and swim hard. But no—no lesson, nothing for him to say.  He hadn't guessed that speaking the first sentence, the “wrong lesson” sentence, would entail speaking another sentence as follow-up. He hadn't realized that one moment would follow another. He'd been happy as a kid playing fort with a blanket.

“Forget about it,” Matthew Vadum says, helpless. The poor bastard, he looks like G.K. Chesterton.