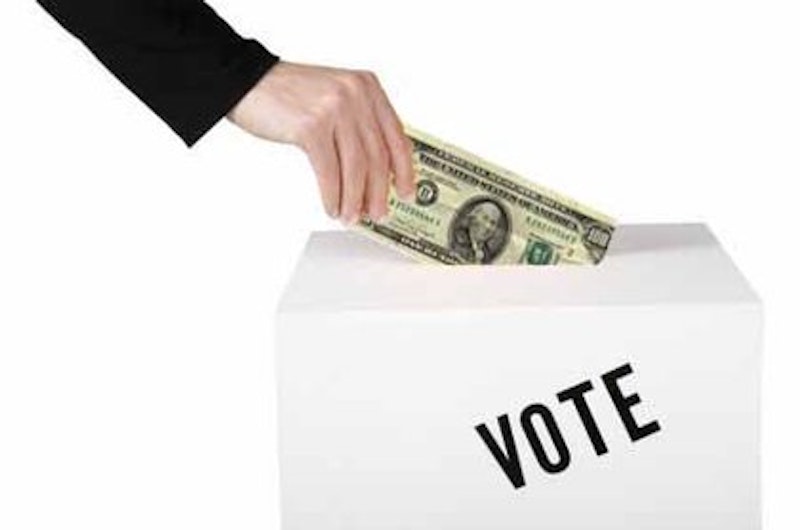 It was just the kind of predictable reaction you’d expect from panicky Democrats: replace one nonsensical law with another. All of a sudden, public financing of campaigns has become the antidote to Citizens United, the Supreme Court’s controversial dictate that money speaks louder than votes in the nation’s already vendible political system.

Democrats are so terrified that the catchpenny drive to replace big money with little money is accompanied by an equally emotional call to reverse the perverse ruling by amending the Constitution, a long-shot device usually threatened by conservatives. Public financing is proof that less is not more. It’s still less.

The newest frenzy mimics the same well-intentioned purification process that followed the illicit cash flow abuses of Watergate only to be further corrupted by the creation of political action committees. Note well that amending the Constitution requires ratification by 38 states and years if not decades. The process also opens the Constitution to other mischief. So instead of defending their turf on issues, Democrats have chosen to fight a battle they are certain to lose. Republicans are as American as money.

Already two Maryland candidates for governor have agreed to accept taxpayer dollars to underwrite their campaigns, Del. Heather Mizeur of Montgomery County on the Democratic line and Larry Hogan on the Republican side. Mizeur has proposed, as part of her platform, a new system of public financing to succeed the existing program that has been dormant for two decades from disinterest and disuse.

In Montgomery County, that fairyland of political perfection, public financing legislation has been introduced under the imprimatur of the County Council president and his eight colleagues who are probably too timid to resist the urge to reform in the righteous county rather than infatuated with the idea.

And at the national level, the Democratic dyad of Baltimore’s own Nancy Pelosi, House minority leader, and John Sarbanes, who represents Maryland’s Third District, have introduced the “Government by the People Act,” a public financing system designed to entice small donors with refundable tax credits. Pelosi, it must be mentioned, is among the Democratic party’s most productive fundraisers.

Most of the proposed plans are formulaic, with varying degrees of triggers, limits, seed money, minimums and maximums, with MoCo’s, naturally, being complicated by a sliding scale of ratios and a ban on PAC money and corporate contributions.

Public financing, in concept, is supposed to give voice to the little guy and the public at-large in those gaudy mercantile enterprises called campaigns. The principal beneficiaries, though, are candidates who otherwise would have difficulty raising money or other entrepreneurs who’re out on a lark. Twenty-five states have some form of public financing, either directly to candidates or political parties, or a tax credit or a combination of the three.

Hogan, on the GOP’s Maryland side, for example, must raise seed money of $260,000 in individual contributions of $250 or less to qualify for a maximum of about $2.6 million in public funds. The net effect of Hogan’s decision is to possibly force the remaining Republican candidates out of the race because their private fundraising has been so tepid or to join him at the public trough if they can match the seed money.

In the Democratic primary, Mizeur is running against the formidable money machines of Lt. Gov. Anthony Brown, with $7.1 million in the bank, and Attorney Gen. Douglas Gansler, with a stash of $6.3 million. In 1994, Republican Ellen Sauerbrey, the last taxpayer-funded candidate, nearly defeated Democrat Parris Glendening, who spent $6 million to win by 5000 votes. The last presidential candidate to opt for federal public financing was Republican Sen. John McCain, of Arizona, whose public funds were no match for President Barack Obama’s privately raised hundreds of millions of dollars.

Public financing has a noble sound and a populist appeal. Yet removing money from politics is like attempting to take politics out of politics. It’s impossible. The crusade to publicly fund campaigns is up against the likes of the Koch Brothers, Charles and David, two of the wealthiest tycoons in America.

Through a network of dozens of affiliate organizations, most prominently Americans for Prosperity, the Koch brothers fund and spend hundreds of millions of dollars to defeat Democrats and Republicans alike who deviate from their conservative ideological straight-jacket. Much of the money is tax exempt and its donors are, for the most part, anonymous. One of the few exceptions is John Schattner, founder of the Papa John’s pizza chain, who is among the Koch brothers’ most fanatical donors and collaborators.

Elections have consequences. Democrats are hysterical over the possible loss of their Senate majority and little chance of re-taking the GOP-controlled House. But they ought to resist the urge of further subverting an already broken and corrupt political system.

Democrats ought to focus on riling up the base in the off-year elections following Obama’s formula in the presidential election. Obama has storage of millions of small donors’ names, each one a Democratic contribution and vote.

More important, they should frame the election as a national referendum on the do-nothing Republican Congress being partly responsible for the growing economic inequality in America. Obama may be unwelcome in states where Democratic seats are marginal but he can at least create the stage on which they’re going to run. Angry voters are a powerful force.

There are 7600 CVS drugstores ready to say thank you for not smoking. They should have told those rugged, hard-working, resilient actors who played Marlboro men in one of the most successful ad campaigns ever created. At least four of them have died of smoking-related diseases.

CVS’s decision to stop selling cigarettes appears to be a public health gesture, or a publicity stunt, but it is actually a shrewd business maneuver that is likely to be followed by other large drugstore chains. In the short term the ban on cigarette sales will cost CVS $2 billion a year in lost sales but in the long view the chain will offset the revenue loss by moving into the rapidly expanding health care business with in-store clinics. CVS decided that cigarettes and health care should not co-exist under the same roof.

Government has waged a relentless war on the tobacco industry and tobacco products. Or so it seems. They’ve won huge settlements, raised prices and sponsored ad campaigns. The combined effort has driven the population’s percentage of smokers down from 34 percent to 18 percent. In New York, cigarettes are $13 a pack, in Maryland about half that. And in 2004 an agreement was reached that prohibited smoking in films and on television by leading characters without the explicit permission of executives. Smoking is parodied in the TV show Mad Men wherein the principals in the 1960s setting are often seen gagging on toxins of the tobacco products they promote in advertising.

But in that same real-life era and before, government and the tobacco industry were complicit partners in an illicit arrangement: Getting people hooked on cigarettes. In earlier wars, World War II and Korea, for example, the first objects battle-weary troops were handed on returning from the front lines were a cup of coffee and a pack of cigarettes.

In Navy boot camps during the Korean War, recruits were treated weekly on Saturday nights to a “smoker” which included entertainment, near beer (three percent alcohol), a carton of cigarettes and a Zippo lighter. At military PXs at home and abroad cigarettes were as cheap as 70 cents a carton. An entire generation or two of nicotine addicts was created with government’s helping hand to the tobacco industry.

On government regulated airlines (FAA), every meal tray included a sample five-pack of cigarettes at a time when smoking was allowed on planes. And on street corners, in big cities and small towns, sample packs of cigarettes were distributed to passersby. Even today, billboards appear in inner-city neighborhoods advertising the hipness and the coolness of inhaling carcinogens.

So the CVS move was applauded by government, including Mr. Nicorette himself, America’s most famous former smoker, President Obama, who said in a statement that CVS “sets a powerful example” that will “help advance my administration’s efforts to reduce tobacco-related deaths, cancer, and heart disease, as well as bring down health care costs, ultimately saving lives and protecting untold numbers of families from pain and heartbreak for years to come.”

Smokers today are pariahs. They are shunned by families, friends and neighbors indoors and out. Smoking is banned in most public buildings and spaces. Others have designated isolated smoking areas. The message is simple: Destroy yourself, but don’t destroy others. CVS is the latest to get it. Next CVS ought to consider clearing its shelves of junk food which, in its own way, is just as lethal as cigarettes.