The term-limited Maryland governor is in a pickle. 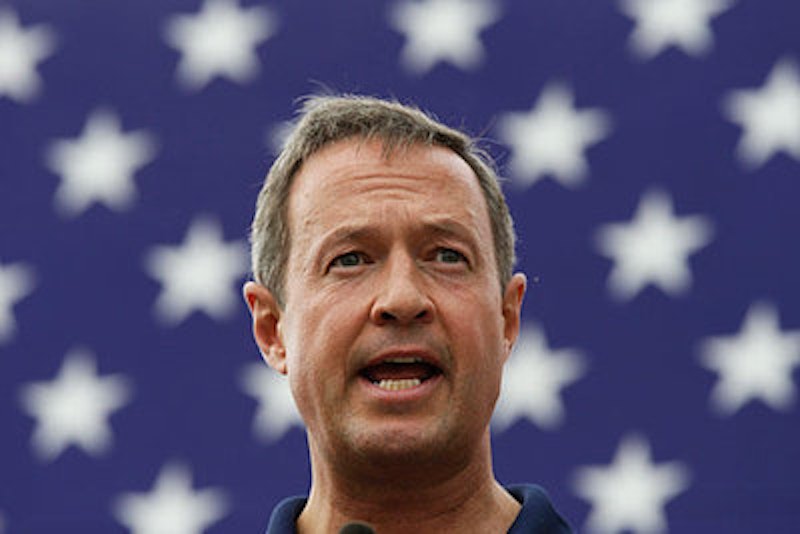 Suppose you’re Martin O’Malley. You’re finishing the second term as Maryland’s governor and come next January, you’ll be out of a job. You’ve always wanted to be president—since you were a kid growing up in Bethesda—and with the Democratic primaries for 2016 right around the corner (in political time), you know, know, it’s your time. You’re 51, hardly ready to take on an elder statesman role, but Hillary Clinton, the prohibitive favorite for the nomination, at least according to the brain-dead journalists you despise, is messing up your plans. In retrospect, you kick yourself every morning for being behind the curve in 2007 and endorsing Clinton, rather than Barack Obama, for the 2008 nod. Without Clinton in the picture—and you’re just praying that the septuagenarian realizes that despite all the money pouring into her coffers she’s just too old for the job and skips the run. You wonder: why didn’t Obama do the right thing and elevate Clinton to the Supreme Court and get her out of the way?

It’s possible that Maryland’s incumbent Sen. Barbara Mikulski, currently 77, will retire, and anoint O’Malley as her successor in the 2016 senate election, but “Barb” plays by her own rules, so that’s not a safe bet. Besides, even if O’Malley entered the Senate, that’d be a lateral move. Maybe worse, since it’d stall the onetime “rock star” from realizing his ultimate ambition: waiting until 2020, or more likely, 2024, would put O’Malley out of the spotlight as younger Democratic hotshots line up for their turn at the presidency. And, should Clinton win the presidency, there’s the possibility she’d give O’Malley this or that appointment, but that’s more of a dead end than the Senate. You don’t grab a lot of headlines as Secretary of Transportation.

So, the question plagues O’Malley: should he play the good soldier or follow his gut? Anyone who’s followed the on-the-make, very liberal Governor (who, not incidentally, was not endorsed by The Washington Post in his successful gubernatorial run in 2006) knows the answer: he’s running.

In a long Post article earlier this month, O’Malley said that while he pledged last year to step aside if Clinton runs, that plan’s been scrapped. Reporter John Wagner captured this gem of a quote from the Governor, one that suggests he—in addition to collecting chits this fall by campaigning for Congressional Democratic candidates—ought to invest in a speech coach. The tongue-twisted O’Malley says: “I have a great deal of respect for Hillary Clinton. But for my own part, I have a responsibility to prepare for and to address the things that I feel a responsibility to address… To squander this important period of preparation because of horse-race concerns and handicapping concerns is just not a very productive use of energy… Right now, I’m going to keep doing what I’m doing—the thought work and the preparation work.”

And there are other hurdles to overcome, such as the temporarily-forgotten scandal at The Baltimore City Detention Center, an ugly splotch on O’Malley’s record that’ll make juicy fodder for 2016 primary competitors. And though the O’Malley camp dismisses it out of hand, the fictional character Tommy Carcetti, a central character in David Simon’s acclaimed The Wire, is in part based on O’Malley—both ascended to Baltimore’s mayoralty and then the governor’s mansion in Annapolis. Granted, despite the political cognoscenti’s fascination with Carcetti/O’Malley, HBO’s The Wire, revered as it was, had a limited audience and most primary voters are unaware of the connection. That doesn’t matter: the dirty-hands operatives in the campaigns of Clinton, Andrew Cuomo, Joe Biden, Brian Schweitzer, etc. would make sure every possible caucus participant in Iowa received DVDs of the show.

O’Malley, at this early juncture, doesn’t even register in the (almost daily) polls, and even Marylanders favor Clinton over their governor. That doesn’t really matter, since the contours of the race haven’t yet been determined. O’Malley, for his part, told The Post, “This is not the year for rolling out yard signs or bumper stickers [Tech alert! Yard signs, at least for the presidency, lost most value in around 1964]. I’m meeting with people in ways that never really make the paper, and shouldn’t—people that have experience in foreign affairs and foreign policy and national security, all of which is part of a continuing education and refinement of my beliefs and thoughts about how to govern ourselves as a people.”

Okay! O’Malley is attempting to “evolve” on policies both domestic and international. As a Baltimore City resident I certainly hope O’Malley’s ambition gets the better of him and he announces for president—the sooner the better. He’s gotten a free ride thus far in Maryland, but it’s my strong suspicion the rest of the country won’t be as charmed by this third-tier Bill Clinton’s long con game.