Let This Moment Teach You Anti-Authoritarianism 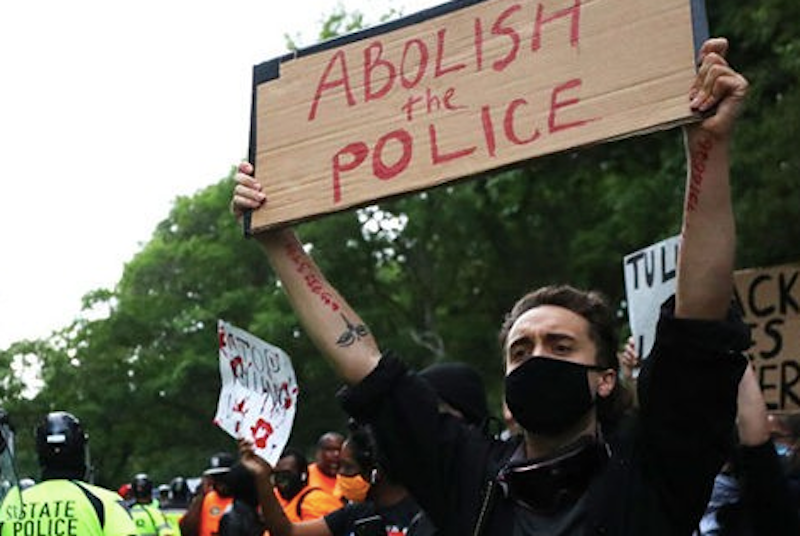 The ideology of Black Lives Matter and associated movements has taken a turn toward general anti-authoritarianism in its calls to "defund" or "abolish" the police. Demonstrators and activists of all colors and ages interviewed at Saturday's massive demonstrations sounded like anarchists, and it's not because their ranks have been infiltrated by Antifa, as right-wing paranoids purport to believe. It's because people have come to know by the bitterest experience what state authority really amounts to, what government is at its heart: violence. That's also a, or the, basic insight of classical anarchism: the "libertarian leftism" of figures such as the great American feminists Emma Goldman and Voltairine de Cleyre.

Brooklyn College professor Alex Vitale, whose book The End of Policing has been influential in the nascent “police abolition” movement, puts the basic point like this: "When we understand the fundamental nature of policing, even if the community has control over it, it’s still a state institution that’s predicated on the use of violence to fix problems." The idea of abolishing the police emerges also from the prison abolition movement, a radical response by thinkers and activists such as Angela Davis to the mass racial incarceration that had arisen in the US by the 1990s. Such thinkers tend to characterize the whole of American society as "carceral," organized by police and punishment, by force and coercion.

Vitale's insight is fundamental, and even obvious: state power rests on force and not, for example, on a social contract. Let the government disarm entirely, or abandon its bottom-line applications of force, let it become an entirely voluntary organization to which people contribute because they see it as in the collective interest to do so. Then it couldn’t persist for a week. At the real heart of the power there are weapons and prisons, surveillance and coercion.

Each major event of recent decades, from Columbine to 9/11 to the war on terror, serves as a reason to enhance the carceral state, and people like Vitale (and many protesters) suggest we begin to abolish the police by getting them out of the schools, to which the help lend the quality of internment facilities. We might also try getting the feds out of our pockets, for they’re on your phone. Meanwhile, Trump identifies demonstrators as "terrorists."

The ideology of statism portrays government as the expression of a collective identity or the way we fundamentally engage in cooperative activity: the government is supposed to be all of us, somehow acting as a single agent or personality. But the role of government at every level in racial oppression through American history makes it obvious that giving a monopoly of violence to a particular group creates an oppressive hierarchical structure, and chisels it in stone. Government makes the hierarchy practically irresistible and permits it to regenerate in generation after generation. White Americans have a racist problem. But some white Americans also have police power at their disposal to enforce their prejudice, to force the social reality to mirror their self-serving attitudes, to make the hierarchy in their heads into an enduring reality with manacles and chains, ghettos and redlining, uniformed officers and prisons.

Voltairine de Cleyre was a feminist, a "free thinker" (atheist), and an anarchist who was raised dirt poor in Michigan (her parents left her at a nunnery because they couldn't feed her). She spent most of her life in Philadelphia, from where she was advocating the abolition of prisons and police in 1903, taking as her first example the useless cruelties being practiced at the Eastern State Penitentiary in Philly. She makes practical arguments about the ineffectiveness of the carceral model of the city in eradicating "crime," while also arguing that what’s regarded as criminal is different in different societies, that crime is a "social construction." You can see this social construction here, now, as in 1903, in the stereotypical association of blackness with criminality: the image of the criminal as a black person, part of the rhetoric of everyone from George Wallace to Hillary Clinton, ended up shaping the application of policing and imprisonment for a century and a half or more, from the prison farm to state pen.

And that ends up shaping whole cities, or the whole society, along racial lines. It shatters families, neighborhoods and schools. Then more addiction and “criminality” emerge from the same places in the next generation. It’s extremely difficult to resist (though it's also resisted in a thousand ways every day), because it rests on underlying overwhelming force. It certainly gives the lie to the idea that the legitimacy of the state rests on our agreement or on our mutual interest or on our consent. Every day, palpably, it rests on devastating violence. This violence is structural, and right up until today it doesn’t stop even at murder.

Voltairine's plea for an un-policed society ultimately rested not on her practical argument that prisons don't reduce crime, though she believed that strongly, but on our moral connections to each other. She thought that in each of us "all things are germinal": each of us carries with us the impulses of judges and prosecutors, and also thieves and murderers. We are all, she says, potential criminals and potential cops. She quotes the saintly Emerson: "I have within me the capacity for every crime."

"Out of one great soul-stuff are we sprung, you and I and all of us," de Cleyre writes. "Ask yourselves, each of you, whether you are quite sure that you have feeling enough, understanding enough, and have you suffered enough, to be able to weigh and measure out another man's life or liberty, no matter what he has done? And if you have not yourself, are you able to delegate to any judge the power which you have not?"

That passage is about privilege, and it’s about privilege enforced by the "rule of law." I find myself hoping that the emerging civil rights movement will lead young people who think of themselves as leftists back to a skepticism of state power as the solution to our problems, and the rise of a new sense of the value, as Voltairine would put it, of unenforced human connection.