Casual Crushing of the Human Spirit

The UVA rapists should be in jail. 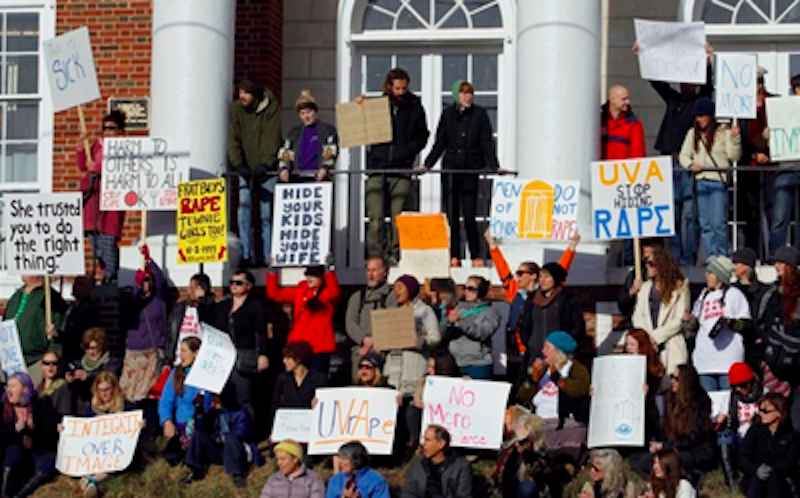 There was a recent report in the media about a young girl who was lured upstairs at a party to a dark room by a male acquaintance whom she trusted (he was her date for the evening and had just taken her to dinner) and, once there, brutally raped by seven men over the course of three hours. The men appeared to be oblivious to the human spirit they were casually crushing. It was party time and they needed (and deserved) to have some fun. As they watched and participated in the violent debauchery that played out, the atmosphere was jocular. The guys swilled beers and smoked weed. There might just as well have been an MMA fight or a football game on the TV. It was just boys being boys (being gang rapists).

Reading this, you might shake your head and think that there are some real degenerates out there doing some horrible things in the places you don't go to or in the circles you don't run in. You may be surprised, then, to learn that this felonious assault took place at the Phi Kappa Psi fraternity house on the campus of the University of Virginia, one of the country's more prestigious institutions of higher learning. The perpetrators are, by any societal standard, stone cold sociopaths devoid of the slightest bit of empathy. They should be doing hard time by now, but in the not too distant future one of them might be advising you to balance out your portfolio with some municipal bonds. Rank has its privileges, and frat boys rank right up there on the UVA campus.

On Wednesday, November 19, Rolling Stone released an incendiary, rage-inducing story depicting the above events. The shockwaves began buffeting Charlottesville, the sleepy central Virginia town where UVA is located, almost immediately. The Phi Kappa Psi house was vandalized by an anonymous, enraged band of students determined to make a bold statement on this issue. "UVA center for RAPE studies" read the graffiti on the building. The frat subsequently announced it was shutting down operations on campus. Students have organized demonstrations. By Thursday evening, UVA was in full DefCon 1 mode, announcing that its President, Teresa Sullivan was (shades of Dick Cheney) at an "undisclosed location." Safety concerns were cited. Some were asking, "What about the safety of the students?"

Reading the graphic account of gang rape in Rolling Stone made my stomach turn. The level of craven indifference and cruelty nine students (two of them were participating only as observer-cum-cheerleaders) can show to a fellow student stunned me. I lived in Charlottesville until last year, having spent six years in the town that will forever live in the shadow of Thomas Jefferson. As a Charlottesville resident you hear, and read, the stories of what's happening at the frat parties. Reports of sexual assaults on campus are not unusual. You get the feeling that it often gets swept under the carpet, if you pay any attention to it. It’s like a steady drip of bad news you get used to after awhile. It was hardly an accident that the magazine article focused solely on UVA. Sabrina Rubin Erdely, who wrote the Rolling Stone piece, had originally set out to investigate the campus rape epidemic, but after hearing the stories about UVA, she headed straight to "rape central"—Charlottesville.

Everything appears so genteel and “elevated” on the surface at UVA. Things are done differently there, just like Thomas Jefferson wanted it. There are no freshman, sophomores, juniors and seniors at the University of Virginia. Instead, there are first years, second years, third years and fourth years. I’ll spare you the rationale behind this, but it is suitably lofty. UVA stresses personal integrity and has a unique honor code that can get you expelled for cheating. Tradition hangs heavily in the air at UVA, informing almost every aspect of campus life.

Strolling around the Lawn and the Rotunda (based on the Pantheon in Rome) on the UVA campus can be a heady experience. You might find yourself drifting back in time as you survey Jefferson's handiwork. When your reverie ends and your mind drifts back to the present day, however, you might find yourself feeling a sense of disconnect if you know what really goes on here at the Saturday night booze and drug-fueled bacchanals that are also a big part of the tradition. The code of omertà must be obeyed. Break it and your social life resembles a witness protection plan. The frats, you see, are the mafiosi of the UVA campus.

There's a dark undercurrent below that shiny, polished surface visible to the eye at UVA. One might even say the same of Jefferson, the slave owner who fathered six children with his own slave. This darkness I grew to feel while living in Charlottesville is now going viral across the country. That's what happens when Rolling Stone prints a story about a gang rape by a pack of privileged preppie freaks at a party on your campus. No carpet is big enough to hide the dirt that's out there now, and the UVA honchos are about to get a chance to see just how much collective rage they can handle.

What the UVA administration now faces is the inevitable blowback that’s bound to ensue when an educational institution values its reputation over the welfare of its students. UVA takes a corporate approach towards the sexual assault issue, so there's the tendency to sweep such problems under the rug. Bad publicity hurts the school's reputation, which hurts its revenues. It's a strictly "business" way of thinking, rather than an "educational" or "in loco parentis" mentality.

It’s a straightforward calculation. Top universities are looking to maximize future revenues, which are provided by students who have not yet enrolled. The students on campus already are, essentially, “money in the bank.” Their protection takes a backseat to luring the ones who have not yet matriculated in the revenue maximization model. The parents of prospective students are indoctrinated to spend whatever the universities charge. They’re not especially discerning consumers when it comes to sending their kids to college. The schools just have to make sure their reputations are clean and the parental money spigot is wide open. As the rape victim told Rolling Stone a dean once said to her, “Nobody wants to send their daughter to the rape school."

Strangely enough, while many have been expelled for cheating, nobody has ever been expelled from UVA for rape. Rape is not covered in the honor code. That’s something that’s going to change now. The dirty little whispered secret is way out in the open now, and the careerist weasels who turned a blind eye to it for so long to serve their own interests are scrambling to save their careers. They're polishing their lies now, preparing for the time they get put on record.

They had the choice of protecting the school's reputation by either cracking down on the problem and eradicating it or hushing it up and crossing their fingers, but they don't get to make choices any more. Damage control is the only option. Oh, and guess what, dean? That place you work at?  It's the “rape school" now. It really doesn't have much of a ring to it, does it?