Racism can't be eliminated, but racist cops can be curbed. 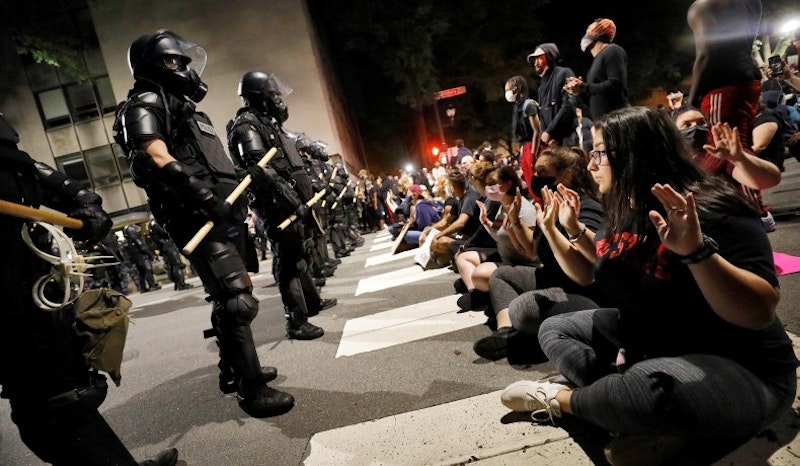 Since the beginning of the street protests over the horrifying police killing of George Floyd on May 25, we've heard much about the root causes of the tragedy—racism, white supremacy, "systemic racism," white privilege, etc. Protesters chant slogans like, "Say his name," “No justice, no peace," "I can't breathe." These expressions of rage are natural, given the depraved police behavior in Minneapolis, but if acute emotion ever yields to determination in stopping future police misconduct, a more brass-tacks approach should replace the sloganeering.

There are two specific matters that must be addressed to bring an end to police misconduct: a legal concept called "qualified immunity," and police unions. Getting rid of them would accomplish more than a year of street protests.

Some have observed, after a cop uses violence against a civilian posing no danger to him (I haven't seen a female cop do this yet), that the police act like the laws don't apply to them. This is often said rhetorically, but in fact the laws don’t apply to cops the way they apply to other citizens, a problem directly traceable to qualified immunity and police unions. The Supreme Court created qualified immunity in 1982 in order to grant all government officials immunity when they violate constitutional and civil rights, unless victims can demonstrate that their rights were “clearly established” by a previous legal case based on nearly the exact same circumstances.

What this means is that when Floyd's family goes to court to seek recompense for his death and hold the four police officers involved accountable, the case may be thrown out unless there happens to be a previous court case establishing the unconstitutionality of a cop kneeling on a man's neck while he's handcuffed. What reasonable person would say they wouldn't know if a cop cutting off someone's windpipe for nine minutes was a violation of his rights unless a court had already established that it was?

Qualified immunity strips citizens of their constitutional rights, just like the recent curfews have. The difference is that curfews are reserved for emergencies and qualified immunity is always in effect. It's a legal doctrine created by judges, not legislators, and it's a violation of American justice principles.

Police unions have also perverted justice. The taxpayers are picking up the tab for this form of "justice," not some wealthy corporation. There's an inherent problem in adding the power of a union to an institution already vested with monopoly power over the use of force against the public.

In response to Floyd’s murder, Barack Obama wrote on Medium that voters should get involved in local politics. “It’s mayors and county executives,” he declared, “that appoint most police chiefs and negotiate collective bargaining agreements with police unions.” While that sounds reasonable, the former president failed to mention that police unions finance the campaigns of local politicians who will be supervising the police. This year, a police union in Santa Ana, California spent over $300,000 on a recall campaign against a city council member who opposed a pay raise for the police. The special election attached to the recall effort cost the taxpayers $650,000. Local politicians not bending the knee to the police do so at their own risk, which is an obvious conflict of interest.

Civilian oversight of institutions licensed to commit violence when necessary is a cornerstone of American democracy. That's why the president commands the U.S. military, which isn’t unionized. Unions interfere with this essential concept. They make it much more difficult to weed out the bad cops, whose misdeeds don’t concern them. Unions protect cops, not the public. Derek Chauvin, the Minneapolis cop who knelt on Floyd's neck, was the subject of 17 internal affairs investigations by the Minneapolis department during his career.

A common scenario when a police misconduct report is filed is that police department leadership reviews it before deciding to investigate, in which case it must inform the union. Then there's a “cooling-off period” that limits investigators’ access to the accused at the most critical time. The result is that an officer often won’t be interviewed at the scene of a shooting, which gives him a number of days to prepare a self-serving story. Via their unions, cops get much more due process protection for alleged crimes than average civilians do.

Police unions insist on contracts that make it hard to fire a police officer. NYPD officer Daniel Pantaleo, who put a chokehold on Eric Garner before he died in 2019, wasn’t fired until five years later. Police Commissioner James O'Neill agreed with an administrative judge's ruling that Pantaleo recklessly used a prohibited chokehold, but the New York City Patrolmen's Benevolent Association stood behind its member, and condemned his dismissal. In the unlikely event that a cop gets fired, there's no nationwide system in place to track his work history, meaning he can often get a law enforcement job in another state.

The problem of police singling black people out for mistreatment is a systemic one, but it's not due to systemic racism. Police unions aren't racist organizations, but they enable racist behavior in their advocacy efforts, presenting an institutional barrier to public safety. Qualified immunity isn't aimed at hurting black people, but it's a gift to racist cops.