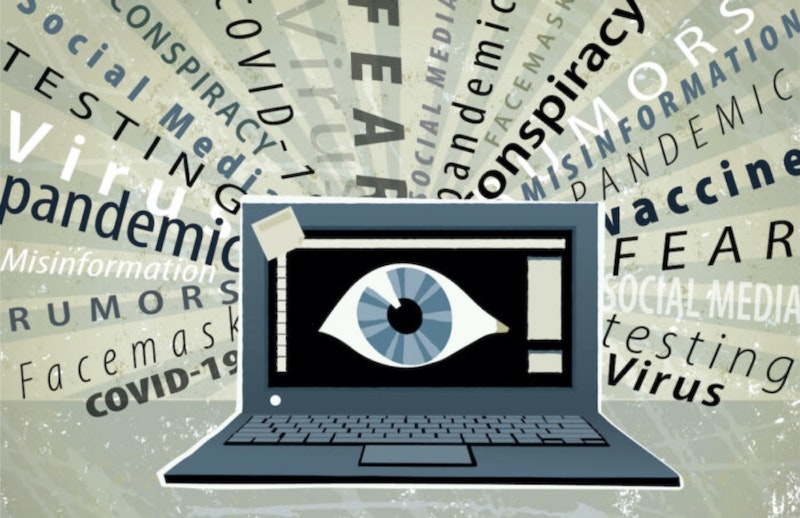 On December 4, 2016, a 28-year-old man from North Carolina entered Comet Ping Pong Pizzeria in Washington, D.C. with a loaded AR-15 rifle. He pointed the gun at an employee demanding to know how to get to the basement. The restaurant didn’t have a basement. This didn’t stop the man from firing several shots into the wall while searching for a secret passage. Customers and workers fled in terror. No one was injured and the man was arrested and charged with assault.

The man told police he’d gone to the restaurant to investigate reports of a pedophile sex ring linked to Hillary Clinton that was run out of the pizzeria. The so-called Pizzagate story first appeared in a Facebook post 10 days before the 2016 election. The story spread to Twitter, was promulgated by bots and was picked up by right-wing platforms Breitbart and InfoWars.

“Conspiracy theories flourish during times of crisis,” says Joseph Pierre, a psychiatrist at the Geffen School of Medicine at UCLA. “When we feel insecure, we often look for information that provides an explanation for chaotic events.”

Psychologist Anthony Lantian says conspiracy theories make people feel special by giving them “secret knowledge” about world events. “This gives them a sense of uniqueness” and an “illusion of control” since they feel more informed.

Lantian claims that people who believe conspiracy theories display certain personality characteristics. These include “openness to experience, distrust, low agreeability and Machiavellianism.” Lantian added that conspiracy advocates “have a grandiose idea of the self… have lower levels of analytical thinking… attribute intentionality where it is unlikely to exist.”

Current popular conspiracy theories include: 5G radio waves are used by the government for mind control; the COVID vaccine is a Bill Gates-conceived plot to plantmicrochips in people; JFK, Jr. is alive and well and will reappear as a Trump supporter; Bill and Hillary Clinton have murdered 50 or more of their associates (the “Clinton Body Count”).

The narratives often involve a celebrity, a shadowy corporate entity or a new world order plot to overtake the government. Disinformation thrives on cynicism and a loss of trust in societal institutions. In a 2018 Politico poll, 77 percent of respondents believed the mainstream media reported “fake news.” In a 2020 Pew Research Centersurvey, 25 percent said coronavirus was intentionally created as a deliberate act of bioterrorism.

After 9/11, conspiracy theories arose claiming the World Trade Center was brought down by controlled demolitions coordinated by high-level government officials. Popular Mechanics and the National Institute of Standards and Technology debunked the theory. But thousands ignored the facts and accepted the conspiracy narrative.

A conspiracy of this magnitude would require the coordinated actions of thousands of people and their collective silence. This doesn’t jibe with human behavior. People don’t agree with each other, they make mistakes, they blab. Life has unintended consequences but conspiracy plots always come off without a hitch.

At the heart of every conspiracy theory is a lie. Adolf Hitler coined the term “the Big Lie” in his 1925 book Mein Kampf. Hitler understood that we all tell small lies but most of us are ashamed to tell large-scale falsehoods. He wrote that people believe a lie that’s “colossal in magnitude.” Hitler’s biggest lie was that Germany didn’t lose the war in 1918. He blamed Jews for spreading propaganda about Germany’s defeat. Because of this, Hitler wrote, Germany had a duty and a right to “exterminate and annihilate” Jews in self-defense.

World War II began on the back of a conspiracy theory.

Donald Trump’s rise to political power was also fueled by a conspiracy theory. His birther claim that Barack Obama wasn't born in America is an example of “the Big Lie.” The statement was so outrageous his followers believed it must be true.

Trump took “the Big Lie” to another level with his claim about the rigged 2020 election. His supporters believe him despite a lack of evidence and a continual stream of legal defeats. The election conspiracy is nothing less than mass hysteria. It’s reminiscent of Orson Welles’ 1938 War of the Worlds radio broadcast where thousands of Americans believed the country had been attacked by space aliens.

In his book The World’s Worst Conspiracies, journalist Mike Rothschild writes that conspiracies have always been with us. After the Roman emperor Nero committed suicide in 68 AD, speculation arose he was still alive and plotting a return to power. In the 1950s, there was Area 51 and a deluge of UFO sightings. JFK conspiracies dominated the 1960s while the 1970s gave us stories about Elvis and fake NASA moon landings.

“There are not more conspiracy theories today,” Rothschild says, “they’re just easier to find because of the Internet.”

QAnon has become a religion for conspiracy advocates. “Q” is an anonymous user who posts on 4chan and 8chan message boards. He claims to be an ex-intelligence operative with “Q level security clearance.” His postings assert Trump and the military are working together to expose a deep state Satanic pedophile ring with links to Hollywood, the Democratic party and the mainstream media.

The QAnon postings are bizarre and alarming. One surreal message states that Hollywood celebrities harvest the chemical Adrenochrome from children’s bodies that they inject to stay healthy and young. This absurd claim hearkens back to the Protocols of the Elders of Zion, a fabricated anti-Semitic text emanating from Russia in 1903 stating that Jews drink the blood of Christian children.

A 2020 Yahoo News poll found that 37 percent of Trump supporters believed there was some truth in QAnon’s messaging. Absolute truth has been replaced by relative truth (or what Kellyanne Conway called “alternative facts”).

The motivation for spreading false narratives likely involves money and power. Given “Q’s” anonymity and support for Trump, one must ask if right-wing lobbyist or political interest groups have provided financial support. “Q” has become so popular that more than 2000 items (t-Shirts, hats, coffee mugs) are available for sale online. QAnon Master Series: The Great Awakening was the #2 selling new book on Amazon. Two QAnon supporters were recently elected to Congress.

For QAnon adherents, facts have been replaced by beliefs. Supporters say their primary motivation is a desire to protect children and fight widespread child sexual abuse. If this is true, why is their vitriol directed against liberal elites? Child abuse is a problem in all tiers of society, not simply among wealthy celebrities and politicians.

When Jeffrey Epstein hung himself in prison, it allowed QAnon supporters to say “Q” was right. This is absurd. Epstein’s abuse was not secret and QAnon didn’t break the story. The mainstream media did. It took journalists and courageous victims to report and speak out in the face of pushback from powerful forces. Conspiracy theories didn't move us closer to justice. They simply offered more noise, confusion and kindling for the political divide.

When encountering a dubious story online, it’s important to practice digital hygiene. Don’t forward a story if you don’t know it to be true. Try to find the source of the information. Ask what the source’s motivation might be. Is money involved? Does the story support one political party at the expense of another? Apply critical thinking.

Writer Mike Rothschild gives advice for dealing with friends and family who’ve become immersed in conspiratorial fodder. Don’t try to debunk their stories. Don’t debate them with alternate facts (you’ll never win). Don’t call them stupid or crazy. Don’t engage them publicly. Remind the person you care about them and you’re worried about losing your relationship with them because of their opinions. Tell them you’re willing to debate them rationally but you don’t want them sending hours of conspiracy videos.

If a person’s views get dark and ominous, talk about consequences. Tell them you can’t be around them while they’re spouting their views. Practice empathy. It’s possible a  friend or family member is going through a phase. At worst, you may have to cut a person out of your life.