We're Going to Do It?

While getting his buzz on at an Obama rally, one student wonders if his generation will remain so excited when asked to actually work and sacrifice for "Change." 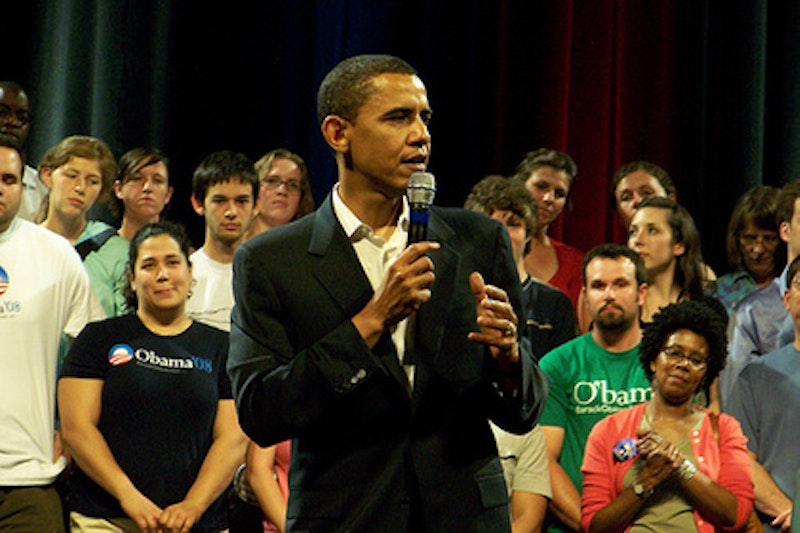 With Barack back at the drawing board and Hillary playing for a tie in the hopes of winning in overtime, this nut-kicking Democratic free-for-all that we all forgot about for a minute will rage on indefinitely. As I found out at an Obama rally in Bangor, ME last month, this isn’t a race to see who can convince the most people; it’s a matter of animating bodies. This is a hunt for a type of animal rarely in its natural habitat, so my associate, Nick Boobs and I went down to Bangor as part of a Heavily-Courted Voter Demographic to see Obama.

No one in their right mind, however, would go out into that mess of a world out there without a little armor, so Boobs brought the medicine. With a quart of rum, a couple of joints, two packs of cigarettes and cold-blooded faith in the myth of America, we got on the bus. I recently got a fortune cookie that read “You may attend a party where strange customs prevail,” but I didn’t know it was going to be like this.

The line to get into this place was four people wide and snaked at least a quarter-mile into town. A lot of people were avoiding the line and heading to the upper balc. I looked at Boobs. “We should be on the floor,” I told him. “Absolutely.” We sucked back the rum that we didn’t finish on the bus and endured a few run-ins with not-quite-official-looking-types while we were trying to step aside. “Hey, you kids…” some chubby guy in a traffic-orange vest and aves said, “you can’t go back there.”

In fairness, we weren’t exactly keeping a low profile. We stank of rum and were wearing some massive shades. After Chubs had us removed from the first parking lot, we went to another one and promptly got very stoned. What a country. It was a beautiful sunny afternoon, snow was on the ground, and Boobs and I just kept saying it: what a country.

Then we ate those words completely. We got back to the line area and hopped in—there was no reason to be standing all the way back there. A group of older women were next to the door singing, “We are the ones, we are the ones, we’ve been wait-ing.” It was almost as creepy as it was cultish. There was something eerily religious about this whole thing that I was not expecting at all. Thousands of people stood in line and most of them must have known, being so far away from the building, that they would never get in. They were there just to be there, as if they had nothing better to do than hang around the corner from somebody who might have an answer to a mysterious question. A woman with a camera took a picture of Boobs and me and told us we were the most interesting people she saw all day. That’s a fucking sad and strange thing to hear when you’re high.

We got in. You had to go through five metal detectors. Makes you wonder how effective they are that going through just one doesn’t do the trick. It’s like getting into an airport: you put everything that was in your pockets on the table and finish the drill. I unloaded three cigarette butts, a hip flask, three lighters and a pack of P-funks. I get fidgety around cops even when I’m stone cold sober. If I wasn’t baked it would have been pretty nerve-wracking getting into this place.

The venue was huge and concrete. Cream’s “I Feel Free,” was playing, intermingled with various solid funks, and Boobs and I were operating. The first thing Boobs said was “oh…it’s a party.” None of the other people we knew were on the floor, we’re loaded, at cruising speed and wearing gigantic sunglasses through this marble-eyed crowd of people. Some danced, some chanted and a lot of people seemed plastically enthusiastic about the whole scene, but nobody did anything.

As Boobs and I mingled with some folks around the floor it became very obvious that nobody knew exactly when Barack was going to speak. One guy from Oreno said 2:00, and talked about how Hillary earlier that day was a lot more formal; someone else said 3:30. It kind of seemed like these people would just stay there getting really psyched about him all day even if he wasn’t coming. They all kept telling Boobs and me that we are the ones that are going to Do It, and all I could do was euphorically wonder why anyone would put that kind of faith in someone so faded. A woman from the local paper asked us some questions. She wanted to know what kind of issues concerned us and Boobs verbally accosted her: “Aliens! I wanna know what’s in Area 51!”

Then the B-List politicos came out and tried to warm up the crowd. This is where these low-end egomaniacs get their stump. One guy, a Maine state senator, said, “Applaud yourself for saying ‘No to Iraq,’ Barack Obama is ‘Against Iraq,’” like a children’s TV host. There were three of these types of people, and they all used ridiculously played out, cheap, psych-up tricks—like continually saying the name of the city—that some shitty Guns n’ Roses cover band might pull.

Finally Barack appeared. I had some strange expectation that there would be a feeling just looking at him, being in the room with him, the way there is at a concert, or something like standing next to Shaquille O’Neal. Not really. Not at first anyway. He’s too smooth for that kind of domination. He’s rhythmic and personable and he doesn’t seem to be as far into The Slime as I had anticipated. This is a guy who plays offense about campaign finance but owns a lot of Hollywood and gets tons of money from there, so most Democratic news channels take it easy on him, throwing him grapefruits to knock out of the park. I’ve never heard him talk about the environment once. He’s a politician through and through, and politics so closely resembles a snarling feast over a hyena carcass that you really can’t trust anybody in there.

He said things like, “I’m tired of hearing cynicism passed off as wisdom,” which I think is key for him, because he’s clearly running on a totally different political wavelength. He pulls out allusions to great presidents and orators from American history, and he seems really aware of this Vast America on a conceptual level. He talks in a timeless way because his speeches are rooted in timeless stuff. It’s easy to forget what he’s actually doing: courting votes, being a politico. He would be good for Washington, I ultimately decide, because he is new. But it’s very clear how his Machine works: picking up bodies. Thousands upon thousands of bodies.

Voting for him versus Hillary is, on paper, not really that different. It’s a matter of voting conceptually—it’s confidently saying that this is new, it’s mind-expanding. That said, I seriously wonder if the people, the aimlessly wandering masses, have any kind of initiative to do the work and make the sacrifices necessary for the change he peddles so hard.

A lot of people were herded into that place; Boobs and I kinda crashed in. There’s a big difference. It’s a question of how large your citizen nuts are. It’s a question of whether you’re willing to flex them in questionable ways and places to help realize this man’s ideas. I feel like Barack has the stuff, but he can’t do it alone… and he’s got a pre-Emilio Mighty Duckish-looking pack of sad-eyed young people who he’s counting on, while it seems like all they’re doing is counting on him.