Spark An Idea, Not A Match

Environmentally minded arsonists have struck again outside of Seattle, doing their purported cause more harm than good. From The Daily Emerald. 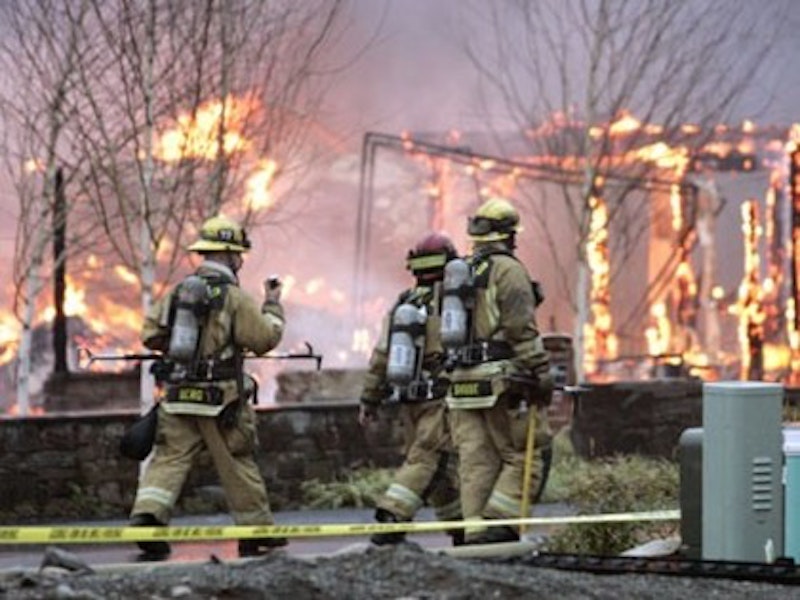 They're back - back in black. Just when many believed that we had seen the last of Earth Liberation Front-style arsons, last week four luxury "eco-friendly" homes near Seattle, valued at about $2 million each, were set ablaze.

Several news agencies reported that ELF had struck again, and Seattle's KING-5 news station showed footage of a white sheet with red spray paint spelling out a "green" message - "Built Green? Nope black! McMansions in RCDs r not green. ELF." RCD stands for rural cluster development, and these unoccupied homes were built in forested land in what some consider a sensitive groundwater area.

Despite the calling card, the FBI is withholding judgment on who may be responsible. ELF, often referred to as a "leaderless resistance movement," can hardly be held responsible for this arson, because it doesn't really exist. And as far as membership to the non-organization, all you have to do to is claim that you're acting in the name of the ELF cause and you're in. It may take the FBI 10 years to find you and give you your full membership package of being declared a domestic terrorist, but the point is that these are the actions of irresponsible individuals.

But even aside from the headline drama of ELF vs. FBI (and whether 21 and passionate can outwit 41 and nearing a pension), the real issue here is determining the best methodologies for affecting environmental awareness. Arson, as a methodology, cannot affect political and corporate movement toward environmental conservation and sustainability because the application of destructive means bolsters those who resist environmentalism, alienates non-violent activists, fractures the would-be environmental movement and triggers overwhelming punitive legal and legislative responses.

No doubt the key component to choosing arson over more low-key activism is the shock value and the certainty of drawing international press coverage to the cause. Arson does get coverage, but it is completely counter-productive attention. Not only does arson associate eco-activism and conservationist movements with destructive radicalism; it's lazy, unimaginative and is easily used by law enforcement, lobbyists and congress as an excuse to obstruct legitimate pro-active environmental moves, as well as justification for undermining all US citizens' constitutional rights to speech, assembly and redress of grievances as guaranteed in the First Amendment.

Violent, destructive eco-activists have long held to a mantra of paradox, that to destroy is to preserve. But really, it's time to embrace a new paradox: To develop is to conserve. The new green has to be profitable and widely marketed. If all our products are developed in line with sustainable and eco-friendly principles, then these principles will dominate our lifestyle. On the other hand, if you torch to protest, you gain nothing but a fleeting ego trip and a prison sentence.

Business and development are ignorant organs that will orient themselves to wherever market demand will make money. This weakness is our strength, if we can find the innovation and insight to take advantage of it. If you want corporate practice to reflect your ideals of eco-sustainability, then create products, practices, markets and demands in a positive sense. Instead of burning luxury homes, spend the money for spray paint and torching materials on a few dozen eco-friendly light bulbs, send out a press release (on recycled paper) and donate those bulbs to someone who has been using traditional bulbs and thereby using more electricity from generation facilities - in short, encourage less impact constructively.

The maligned tokenism of arson is something eco-activists have to really talk one another out of. Torching of SUVs in the early '00s did not bring hybrid and smaller vehicles onto the road - they were encouraged by general environmental concerns, gas prices and, more importantly, it is market demand that now drives the growth in hybrid and electric vehicle development. Some will say that this approach is selling out to "the man," but in fact is actually a much more satisfying and intellectual manipulation of "the man" because "he" becomes the tool of your view for the future, rather than a hegemonic "Big Brother" of some dystopian apocalypse.

On the other hand, eco-motivated arsons are actually the very grist that the Department of Justice and the U.S. Congress need to justify their dystopian moves, like the Violent Radicalization and Homegrown Terrorism Prevention Act of 2007 which amends the Homeland Security Act of 2002 and classifies as terrorism any "use of force or violence by a group or individual to promote the group or individual's political, religious, or social beliefs." The recent arson clearly qualifies, and probably meets USA PATRIOT Act federal sentencing guidelines for terrorist arson as well.

Under the broadest terms of that open-ended 2007 act, even persuasive force or written or spoken rhetoric in order to promote social beliefs could be subject to prosecution under domestic terrorism law. This very column could be violating federal terrorism law right now.

Clearly eco-arsonists have not thought this through. To derail the threats to both our environment and to our liberty we have to recycle the idea of destructive resistance and move forward with intellectual, critical, marketable and legal methodologies.