Or, thoughts from the Pennsylvania Turnpike. 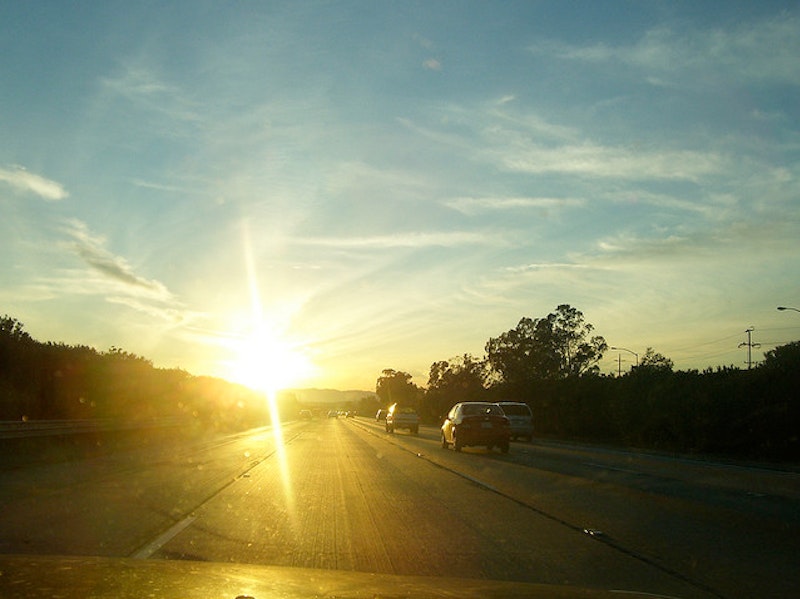 Recently I drove from Ann Arbor to Baltimore, about 510 miles, in eight-and-a-half hours. The trick is to stop as few times as possible, which I did just twice, combining gas, bathroom breaks and refreshment all at once.

Speed-wise, I kept the cruise control no more than six miles above the speed limit. This fact has amazed some friends and acquaintances; they assume speed-limit-plus-10 is the gold standard of highway driving. I can only imagine they’ve never driven on turnpikes, where state cops are filling quotas left and right. That’s probably the most obvious point: the longer you drive 10 over the limit, the greater the risk of getting pulled over. As someone who’s been nabbed for doing exactly that, telling the guy outside your driver-side window that you were “only” speeding by 10 miles per hour isn’t really going to cut it. You might get a warning; you probably won't.

The lesser point, though, is that over the long haul speeding accomplishes very little. If the limit is 65, the difference between going 75 and 71 (let’s throw in a +/- of two mph) is, at best, a half hour or so. You’re still slowing down with traffic, still stopping for gas or whatever, and you’re looking for hidden cops over every hill. It’s pretty stressful.

So armed with this philosophy I cruised across northern Ohio and Pennsylvania, into the Chesapeake watershed and then Baltimore with never a worry. On the way I saw at least a dozen cars pulled over; I recognized a few of them, and felt pretty smug: here I am, tootling along, doing my thing, and there you are, the ass who tailgated me in the middle lane, there you are pulled over, getting written up.

My thoughts turned to a brief time in Los Angeles. The highway traffic itself was not entirely overwhelming, having grown up in DC, but what was most startling, most disconcerting, was the sheer number of traffic accidents—and not a bunch of fender benders; I’m talking flipped SUVs and detritus strewn across three lanes of traffic. (Driving past an accident, my friend mentioned, “That looks fresh.”)

Every year well over 30,000 people die as a result of traffic accident. Over 4,000 alone are pedestrians, and a huge number of automobile-on-automobile deaths occur on the highway. The main culprits? Speeding and reckless driving. Thousands and thousands of senseless deaths, year after year—there are pockets of outcry, but for the most part traffic deaths are mundane. A plane crashes and the airline suffers a drop in business; a few gas pedals get stuck and now Toyota is running endless commercials reminding us that it’s spending a million dollars an hour on safety research.

In view of the cyclical uproars and bouts of political umbrage lobbed at marijuana use, digital drugs, crime born of illegal immigration (a flat-out untruth), Islamic centers near where the World Trade Center used to be and whatever else captures our collective panic, it’s worth considering why we, as a whole, don’t care all that much about the 30,000-plus people who die every year on the road.

In fact, we compartmentalize death. Human life is only important in seemingly political contexts: an unborn fetus, a soldier overseas, a murdered abortion doctor, a shooting at a school or an army base, a plane crash. These scenarios come out of nowhere, and we can’t predict them; we have no agency over them. Driving a car, on the other had, is all about agency. You, after all, are the one behind the wheel, in control of where your wheels are going and how you get there. That is, of course, a gross simplification and a dilution of moral equivalency. World Trade Center employees certainly had their agency about them when they went to work; it's how our agency is taken from us that determines whether or not the greater public cares.

I don’t see any major politicians or elected officials calling for doubling or tripling the highway patrol; no one is taking a stand on human life as an absolute. Death is politics. The drunk driver who died along with you and your wife and your kids as you headed south to Florida or around the corner for some ice cream isn’t going to receive a barrel of outrage from network news. The deaths of you and your family are part of a relentless statistical black hole of morality.