All we got you was the debt crisis, a recklessly stubborn Republican party and some more gray hair. 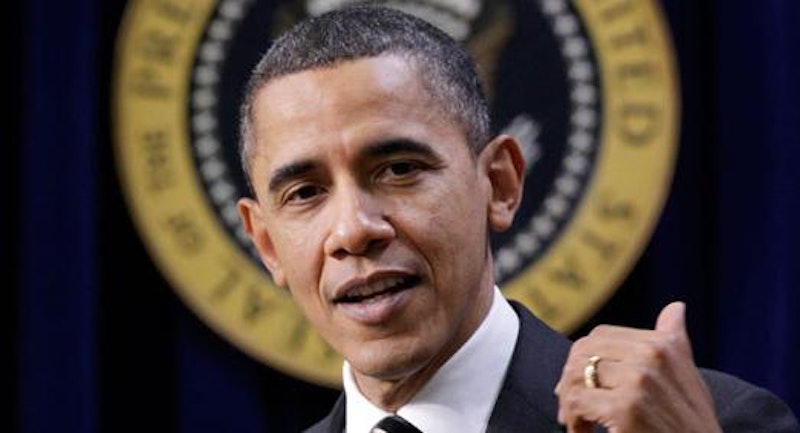 Pity poor President Barack Obama. The news just keeps getting worse. Just as the grief over the debt ceiling debate was easing and the White House decided to pivot to jobs, 74,000 FAA employees and contractors were suddenly out on their keisters because of a protocol standoff on funding. The issue was resolved (temporarily) late last week. As if that weren’t enough, the rosy jobless numbers two weeks ago were revised to show that there was no 16-week drop at all but the unemployment figures were actually 401,000, above the dreaded red-zone number of 400,000. Then came the next report that 117,000 jobs were added in July, reducing the unemployment rate to 9.1 percent, nonetheless far short of the 350,000 new jobs needed every month to resuscitate the economy. There is recurring talk of a double-dip recession and growth is less than one percent with government borrowing equaling the gross domestic product (GDP.) The stock market tanked because of global fears, wiping out the year’s gains in a 500-point free-fall, the worst single-day dive in two years. Italy and Spain’s economies have the world jittery, and gold, the high-rollers’ comfort-zone alternative to stuffing the mattress, began losing some of its luster. To contribute to the precipitous slide, the U.S. lost its Standard & Poor’s Triple-A debt rating for the first time in history. Who, it is fair to ask, even has time to worry about the two wars we’re fighting or the famine in Somalia let alone the massacre in Syria? It is any wonder Obama is turning gray before our very eyes at the ripe young age of 50.

Mort Sahl, the comedian, observed that “anyone who maintains a consistent political philosophy will eventually be tried for treason.” In the great bloviation of words that have been written and spoken about the partisan spit-ball contest over the debt ceiling and the deficit, one great question remains unanswered: Can Congressional members of the Tea Party, and other Republicans, be tried for treason? The 14th Amendment of the constitution is clear: The debt of the United States is sacrosanct and cannot be questioned. Put another way, the debt is inviolate and must be paid.

There are 285 Republican members of Congress who have taken two oaths – one to support the Constitutution of the United States and another to support the tax policies of Grover Norquist and his tax advocacy group, Americans for Tax Reform. This is clearly a case of misplaced loyalties, if not downright sedition. By signing Norquist’s pledge not to raise taxes, or by closing tax loopholes that would eliminate special tax breaks for the rich, are Tea Party members and other Republicans subverting the constitution and their solemn oath to support that sacred document by violating the 14th Amendment. Their allegiance to Norquist appears to supersede their loyalty to country. Norquist’s iron grip over the 285 Republicans if they violate his pledge is the threat to find and fund opponents to run against any defectors, presumably with the financial help of fellow lobbyists and the hot-house of conservative moneymen such as the billionaire Koch brothers and right-wing sugar-daddy Richard Mellon Scaif.

So it was Norquist and his merry band of GOP marplots who thwarted Obama’s attempts to help erase the $14 trillion debt by closing tax loopholes that favor the rich,  which most economists agree is needed, in addition to spending cuts, to bring down the debt and stabilize the economy. Obama was stuck and appeared weak, as well as lacking hard-nosed negotiating skills, and willing to trade off the entire Democratic grab-bag of social welfare programs – including Social Security, Medicare and Medicaid – in exchange for plugging the loopholes. But in dealing with ideologues and purists, the usual government gee-gaws wouldn’t work – a bridge here, a highway there, a dam for a water-starved state – because the House has put the kibosh on earmarks. To the Tea Partiers, the entire four-month debate had degenerated into a matter of principle. They, in effect, have handcuffed the president and his ability to deal with the economic crisis.

By every measure – polls, public pronouncements, the sentiment of most economists – the public favored a plan that included increased taxes on the wealthy, usually defined as incomes over $250,000, either by direct taxation or closing tax loopholes that benefited upper-bracket earners. Another approach was that government should ignore the deficit for the moment and concentrate on job creation which, in turn would generate revenue through taxes. Large banks and corporations have accumulated billions in profits but they refuse to lend or invest in expansion because people are fearful and aren’t spending and creating demand. The truth probably is that nobody really knows what to do.

The Tea Partiers insisted on a balanced budget amendment – “cut, cap and balance” - probably without understanding the implications of the proposal, but simply grabbing headlines and air time for their crusade. First off, amending the Constitution requires ratification by three-fourths of the state legislatures which could take years if it were to gain traction at all. Republicans right now control only 26 state legislatures while Democrats control 15 and eight are split – hardly enough for the GOP to win the necessary three-fourths of the states. Second, throughout the Tea Party’s political posturing for the balanced budget amendment, no one acknowledged that balancing a budget, more often than not, requires raising taxes to meet the constitutional requirement as its does in Maryland and the other 48 states that require balanced budgets (Vermont is the lone exception.)

Recall that when President Lyndon Baines Johnson proposed Medicare in 1964, the entire bloc of Southern lawmakers opposed the federal health-care program. Johnson quietly maneuvered to raise the foreign peanut import quotas, thereby benefiting every peanut farmer in the south and winning in exchange the support of grateful southern members of congress. Such legislative finesse will not work with Tea Party and Norquist loyalists even if it would benefit their constituents. The Tea Party has accomplished its main goal. It came to Washington to cut back the size and growth of government and reduce spending and it has succeeded by reducing government to gridlock. Yet in the end, a good old-fashioned deal between the White House and the Senate ended the stalemate when it appeared that nothing else would. That, citizens, is the way Washington works.

So guess what? Washington is right back where it began the great deficit debate in April. Nothing was really accomplished because it has to be done all over again in four months when the debate will assume a yet another layer of malfunction – a super committee of Congress to make the decisions the Congress itself couldn’t make. And guess what again? Both Democrats and Republicans have vowed to appoint committee members who will represent their positions – for Democrats, members who will protect Social Security and Medicare from cuts and fight for tax increases, and for Republicans, members who will stubbornly resist attempts to raise taxes or close tax loopholes. More political theater and legislative gridlock is the menu of the future. It’s a mystery why Social Security is even fodder for debate except that Republicans would like privatize the program and turn it over to Wall Street. Social Security has not contributed one penny to the deficit but, in fact, takes in more annually than it pays out.

But there’s hope in the stalemate. The so-called Bush tax cuts, which are largely responsible for the fiscal mess along with the two Bush wars in Iraq and Afghanistan, expire at the end of 2012. Obama will either be newly re-elected or a lame-duck president who can ignore the screaming and sulking by the Tea Partiers (who may lose many of their 87 House seats because of presidential ballot-pull in the election.) And Obama may get his revenue after all without a peep from the wealthy who’ll give up the tax breaks but hopefully create a serious case of heartburn for Norquist.

Here is how the deal works, according to published reports: Spending limits begin on Oct. 1 when $917 billion will be cut over 10 years; by Thanksgiving, a special committee will begin sifting the budget for more cuts totaling up to $1.5 trillion; House and Senate vote up-or-down on proposed cuts; Congress must vote by Dec. 31 on a balanced budget amendment, requiring two-thirds vote in each chamber; failure by the committee to act requires cuts of up to $1.5 trillion over 10 years, half defense and half domestic programs. The states will take the biggest hits.

It’s tough to imagine a black president governing when, in virtually every poll that’s reported, 20 percent of the voters say openly that they dislike Obama because he’s black (his mother was white.) It must be even more difficult when Republicans, no matter what, are determined, if not united, by a single cause and that is to destroy Obama’s presidency and bring him down in 2012, the nation and its economy be damned. Happy 50th birthday, Mr. President.