How the media lies by omission. 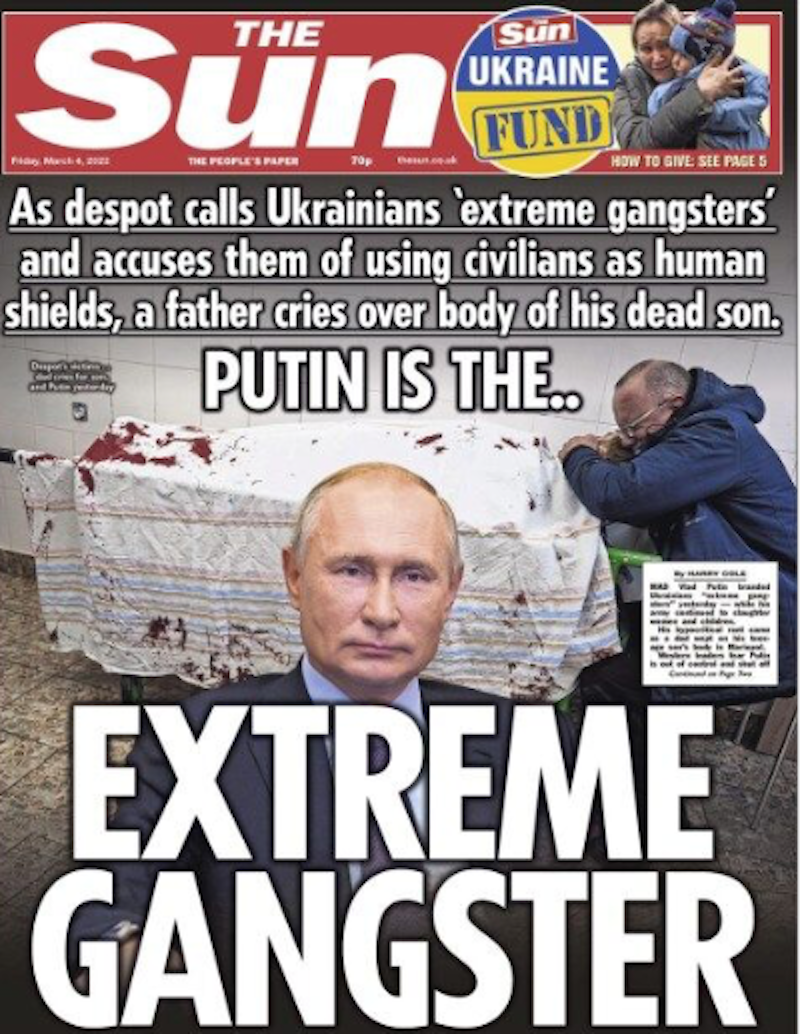 On March 4, 2022 the headline on the front page of the Sun newspaper read: PUTIN IS THE EXTREME GANGSTER.

The words EXTREME GANGSTER were in extra-large type, taking up nearly a third of the page, laid over a picture of Vladimir Putin looking impassive and inscrutable, in front of a picture of a distraught Ukrainian father grieving over the blood-stained corpse of his dead son. It was a powerful image, specifically designed to short circuit the rational centres of the brain and go straight for the emotional heart.

It’s true. Putin’s an extreme gangster, as is his army, as are his generals, as are his subordinates in the kleptocratic petrostate he leads, as are the oligarchs who have hidden their stolen wealth around the world, buying property and connections in every major Western country. The invasion of Ukraine is a war crime. It represents a war of aggression: “the supreme international crime differing only from other war crimes in that it contains within itself the accumulated evil of the whole,” according to the judgment of the International Military Tribunal at Nuremberg.

There can be no doubt about this. There can be no equivocation in our response to this. There are no excuses. War is evil, a war of aggression the supreme evil. People are dying. People are being maimed, wounded, hurt and traumatized. They’re scared. Their children are scared. Parents are scared on behalf of their children. Their lives are being brutally disrupted. The trauma of war never really goes away, and its echoes resound down through the generations in dark, hidden, unconscious ways.

A war at this time, when our planet is on the edge of catastrophic meltdown due to climate change, in the aftermath of a pandemic, with the whole world and all of its human inhabitants confused, and disorientated, is particularly unforgivable. We could really do with getting the world back together, with starting the process of healing, with trying to make the world a liveable place again.

Not that the news media are using any of those analogies in order to explain the current war in Ukraine. Instead they’re reaching over the top of those fairly recent conflicts—all of which have taken place within my lifetime—into the deep past: to World War II. Putin’s compared to Hitler, his invasion of Ukraine to Hitler’s invasion of Poland. This is a territorial war, an expansionist war, a war for resources, they suggest, rather than, as Putin has claimed, a war to protect the Russian homeland from incursions by NATO and the West.

What all those other wars have in common is that, in one form or another, we can clearly see the mark of the West upon them. Both Saudi Arabia and Israel depend upon United States’ military or financial support to continue their actions. The conflicts in Libya and Serbia were NATO-led. The war in Afghanistan—the longest war in American military history—has only just concluded, as a debacle on an unprecedented scale, with the return of the Taliban regime, 20 years after the US-led invasion which set out to remove it. The Iraq war was an illegal invasion of a sovereign nation, undertaken without a UN mandate, without justification or provocation, using trumped-up charges and blatant lies, without even the excuse (which the Russians can at least lay claim to) that anyone’s territorial integrity was being threatened. It was an obvious attempt to take control of Iraqi oil, to steal Iraqi resources, nothing more.

If any war in the last half century can be described as a war of aggression, or the act of a gangster state, it’s the war in Iraq. As with Ukraine, the invasion of Iraq by British and American forces was a war crime as defined by the Military Tribunal at Nuremberg. It’s strange that the Western media seem unable to draw an analogy with this. Perhaps it’s because it reminds us that the gangsters of the East are perfectly matched by the gangsters of the West. In reality the war in Ukraine is a war between rival gangsters. It’s a bit like the territorial wars over the control of drug supplies in most major cities. This is one mafia gang facing off against another, and almost all of our Western media propaganda is designed to obscure that fact.

Instead we have pop psychology of the late-night bar room variety, calling into question Putin’s sanity. The article on that same Sunfront page begins with the words “Mad Vlad Putin” and goes on to say that Western leaders fear that Putin is “out of control.” Words like “sociopath” or “psychopath” are bandied about. The size of the table at which he greets his visitors to the Kremlin is cited as evidence of his increasing paranoia. This may be true. It would take a deranged mind of Jovian proportions to want to take us to the nuclear brink over the perceived actions of a neighbor state; unless, that is, some of his fears are justified.

What the current media onslaught fails to acknowledge is the degree to which the West has been complicit in the build-up to the war, particularly since the Maidan protests of 2014, which brought down the previous, democratically elected president, Viktor Yanukovych. Look carefully and you’ll see that the American government had a hand in this. Not only did it fund anti-government sentiment through USAID and the National Endowment for Democracy, but, in a leaked phone call between Assistant Secretary of State Victoria Nuland and US ambassador to Ukraine Geoffrey Pyatt, was caught picking the next president. After the protests turned violent—widely considered to be the work of provocateurs—the President was removed by unconstitutional means, and the way was open for a new, Western orientated government to take over. Western interference in the political future of Ukraine has continued unabated ever since.

The failure to tell this side of the story amounts to propaganda by omission. By ignoring vital facts, the media are skewing the narrative in a way which allows the West to increase the tensions, and the Western war-industry to profit from the ensuing chaos.