Before you believe them on war, recall the lies on UFOs. 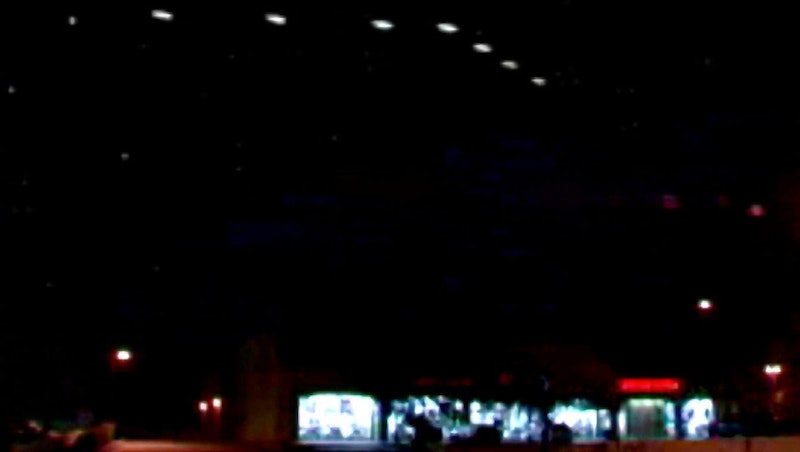 Politicians in wartime still act surprised that no one trusts them, the pronouncements of their militaries, or the reports of their journalist allies. They shouldn’t be surprised, and neither should you. As a tiny, quirky bit of evidence, let’s revisit a few times they demonstrably lied about UFOs, without (as far as we know) even having the immediate pressure of combat to justify the deceptions—and I say this without being at all confident that aliens of any kind exist.

There are a few big UFO anniversaries in the news right now, so it’s as good a time as any.

Next week marks the 25th anniversary of the March 13, 1997 “Phoenix Lights” incident, in which a substantial portion of that city’s inhabitants saw what appeared to be a vast, hovering, dark object with a roughly triangular light pattern on it loom over the city. There are photos. There’s video footage. There are countless eyewitnesses. The lights don’t gradually descend like the military flares that some dismissively offered as a possible explanation—and in any case, the residents of Phoenix see flares and military planes all the time without freaking out about it. This was special.

But for current purposes, I’m more interested in how Arizona’s then-governor Fife Symington—who I actually like, as politicians go—reacted and what he says about it all now. Then, he dismissed it with a joke, appearing in public with a guy in a goofy space alien costume and telling everyone to lighten up. Seventeen years later, he admitted he lied when he implied it was nothing, fearful of starting a panic—and admitted that he saw it himself, that it appeared the size of an aircraft carrier in the sky, and that it was almost certainly not of human design.

He could be lying the second time instead of the first, but the interesting thing is that either way—and regardless of what the thing was—he constitutes an admitted government cover-up effort all by himself, distorting the truth even if you assume he’s the only politician or bureaucrat who ever lied on the topic, which seems unlikely.

(By contrast, I think that Catholic priest who recently had to tell the people of Phoenix that years’ worth of baptisms he’d performed are invalid because he started the ceremony by saying “We baptize” instead of “I baptize” is a stickler for accuracy, and I’m as skeptical about religious claims as I am about alien and paranormal ones.)

This July will also bring the 75th anniversary of the Roswell, NM incident, which looks more and more like a template for later official obfuscation and public confusion on UFOs, with government producing at least three contradictory official explanations of what crashed there—saying in succession it was an alien flying saucer, a conventional weather balloon, and finally (nearly five decades later) a special Cold War surveillance balloon. Will those three things—misperception, the military, and (so to speak) Martians—be juggled forevermore as possible explanations for these sorts of events? Any way you slice Roswell, government lied at one or two points along the line (even if, again, there are no aliens).

This summer will mark one year since that congressional/Defense Department UFO disclosure report that was much anticipated prior to its release and then quickly vanished from public discourse. If some bunch of young interns working on that report was tasked with making the increasingly mainstream topic of UFOs seem as boring as possible to tamp down interest in further disclosures, they may be high-fiving each other in a Washington, DC bar even as you read this, even if the report (little more than a long memo) technically contained no lies.

On a personal note, as I’ve mentioned before, I found myself silenced in 2014 when Fox News invited me to talk about UFOs but then threw me out when I arrived in their lobby, for reasons that remain obscure, with libertarian talk host Kennedy not explaining and never quite speaking to me in full sentences afterwards. Perhaps I’ll learn more by attending a bar gathering of other Reason-affiliated libertarian media personalities at Caveat in Manhattan the night of March 7 and paying special attention if talk turns to the mysteries of Fox—but sometimes with media bureaucracies such as that one, as with redacted military documents, there are no solid answers ever to be had.

An encouraging, somewhat libertarian and somewhat populist lesson of the past decade, though, is that certain answers are far more likely to come from leakers, whistleblowers, cranks, oddballs, dissenters, and random saints than from any of the bland jerks nominally in charge of this world, be they military generals or media execs.

By contrast with those bozos and their measured words, a dwarf-height young producer at the site Barstool Sports named Zah recently talked at length on a podcast about how he was a young student at the Ariel School in Ruwe, Zimbabwe back in 1994, years before he emigrated to the U.S., and as some 60 students and one adult there did, he saw a UFO landing, sticking to his story for decades since. Even the skeptics say something happened at the Ariel School, even if it was perhaps a sophisticated hoax involving, say, wealthy teen pranksters with a gleaming hovercraft.

Or perhaps if we keep waiting for truth to come in the form of official documents thrice-vetted by humorless establishment figures, we’re just begging to be misled and have been for many decades now, about a great many things.