CNN Recalls Why It Exists

My journalistic heroes are war correspondents like Clarissa Ward and Arwa Damon. 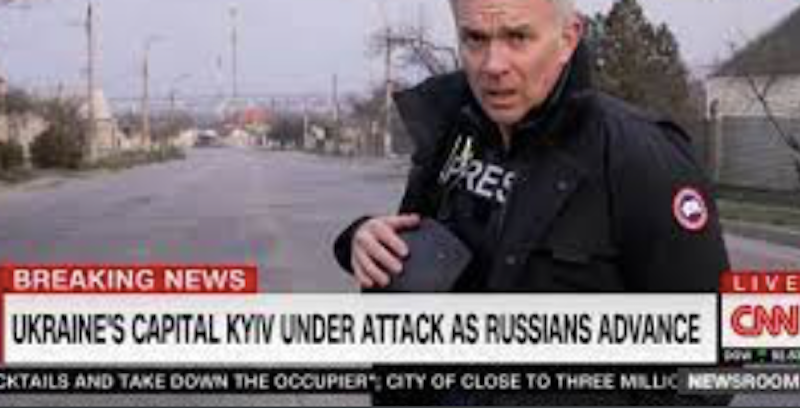 The other day I was having lunch with a friend who’s worked for decades as a reporter and is now teaching journalism classes. As is often the case, we started talking about growing up among DC newspaperpeople and news junkies, and bemoaning the current state of affairs: the death of local papers, the lack (as we see it) in a lot of young people's nose for facts, ability to sort significant from insignificant information, and understanding of the purposes of journalism.

Fewer people are studying journalism now than in the years of our youth, which isn’t surprising because not nearly as many jobs in the field exist compared to, say 1975. The degree might not be marketable. On the other hand, people can’t understand what’s happening in the world or even in the next neighborhood over unless someone is working to produce factual accounts. And uninformed opinions aren't very useful.

So we were kind of saying, "Kids today!" However, the youngsters aren’t our only problem, as last month's removal of Jeff Zucker as CNN president demonstrated. The network under his watch collapsed into Trump obsession, as well as Cuomo-worship. All day their hosts and reporters ranted against Trump, puffed up Robert Mueller, slapped each other on back, took Andrew Cuomo's Covid conferences live and gasped in admiration, and distorted every political story they covered, replacing factuality with wishful thinking and relentless self-congratulation. Nowhere was this more disturbing than in the Jake Tapper afternoon; the goal appeared to be to mirror Newsmax slant for slant. They completely lost the distinction between ideology and reportage.

Our lunch wasn't all moaning, however. This time we managed to retain or regain a bit of optimism, possibly because we’d both been watching a lot of astonishing and moving coverage of the war in Ukraine on cable news. CNN had been in a post-Trump ratings collapse of epic proportions, and they and MSNBC are still liable to do an hour in which the invasion of Ukraine is interrupted by the squads of former prosecutors the networks hired as analysts in 2017 tendentiously analyzing Trump's legal woes. Well, to avoid senility, former prosecutors need to stay occupied.

But the coverage of the Afghanistan surrender and of the Russian invasion and destruction of Ukraine shows what journalism is for and have put CNN back on the screen at my place. The reporting of people like Clarissa Ward, Ben Wedeman, and Arwa Damon (and their crews) from Kabul as it fell was courageous and important. I still remember Damon in Libya, 2012, exploring the consulate after the attack in Benghazi. The CIA and American military hadn’t been able to reach it.

My journalistic heroes are people like Ward, Matthew Chance, Alex Marquardt and their equivalents in other news organizations (though I must say I think CNN is particularly excellent in and dedicated to this kind of coverage): reporters who are scattered around Ukraine right now, giving reports against a background of audible shelling, accompanying refugees as they flee cities under Russian attack, or working out ways to interview Zelensky face to face. They’re putting their lives on the line to cover this material. It amazes me and fills me with gratitude.

Without people like that, we'd have to rest satisfied with sorting out the various streams of disinformation emerging from the governments involved. And though CNN manages to show us what's happening tactically on the ground, they show us also what it's like for people, as these reporters, many of whom speak multiple languages, interview people who are undergoing these devastating experiences. Clarissa Ward accompanied refugees on one of the last flights out of Kabul so she could tell us what they were experiencing. Watching her report from Irpin (first link above), I started crying.

It's possible to be worried that coverage of these sorts of violent crises is experienced on cable as a form of entertainment, as though we were watching an action film or sporting event. If Ward's coverage of refugees got me teared up, it was safely in my living room. I may have had the sense for a moment that I was there, but I wasn't. And there's not a lot of action that I'm going to take beyond a few charitable contributions. Perhaps my emotional experiences are just a bit pseudo. But without this sort of coverage, I wouldn’t know what's going on at all or how to think about it. Maybe, for example, his handling of this crisis (as Kabul too) will help me figure out whether to vote for Joe Biden next time around. Conducting a democracy without clear information and also human connection as it bears on policy isn’t possible. Maybe it will show us all, as well, that flirting around with Vlad in the style of Donald Trump is the world's most terrible idea. They can make that point too, but I'd leave that bit in the hands of political commentators, not hosts or reporters.

At any rate, CNN is re-teaching itself and its audience—and I hope it's showing young people—the value of reporting, or why someone might risk their life to tell true stories.