Why did The Atlantic offer column inches to a mainstream pop star to cover green technology and NASCAR? 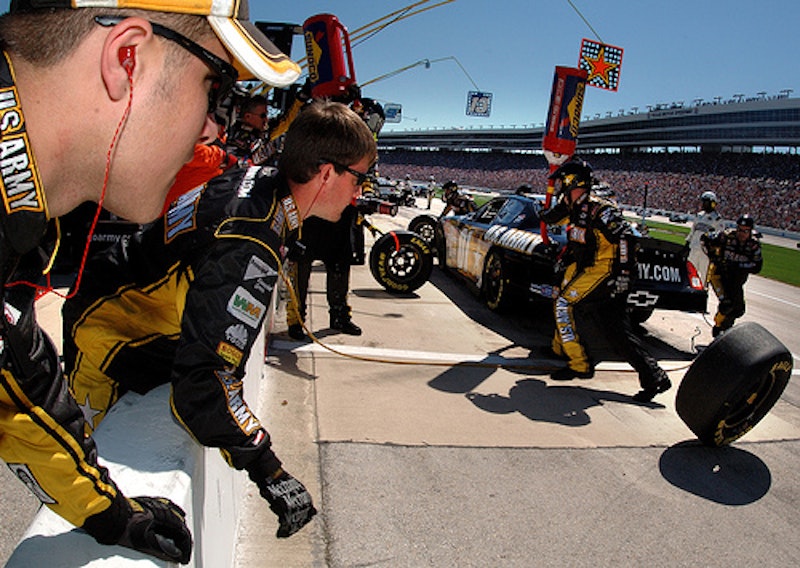 Life traffics in weird little coincidences.  Yesterday I left a comment on Russ Smith’s article, “Sticking With The New Republic,” that said,

The Atlantic is at the moment my only subscription. Its features are top notch and its stable of writers is full of all stars, but their short pieces/front of the book stuff is, well, not The New Yorker. The New Yorker floors me with their consistency, and in a way it's marred my appreciation for other magazine writing. The biggies like TNR, Time, Mother Jones and The Atlantic simply don't have the bench strength to make every single frickin’ word on the page count.

On the train from DC to Baltimore early this morning I devoured most of the March issue of The Atlantic (to be fair, the train sat on the track for an additional 30 minutes somewhere en route). The only piece I haven’t read yet is the cover story, “The Recession’s Long Shadow: How a New Jobless Era Will Transform America,” by deputy managing editor Don Peck—I like to savor The Atlantic’s cover stories, as they are some of the best in the game.

I’ve written before about the strength of the magazine’s blog forum par excellence; its stable of bloggers is truly the most comprehensive gathering of minds under a single masthead. The print version is as strong roughly 75 percent of the time. Like I said, they just don’t have the bench strength of The New Yorker, but they are two different magazines—the former is much more mainstream, accessible, with only one seriously long-from piece, whereas the latter is scholarly, wry and is known to sport the 10,000-word article on magnesium followed by a 6,000-word book review that doesn’t mention the book in question until the 3,5092th word.  I’m not denigrating either; they both have their plusses and minuses.

But in this March issue The Atlantic offered up a front-of-the-book piece so mind-numbingly dumb I’m considering writing a letter to the editor for the second time in my life (the first time being a congratulatory letter I wrote to Guitar World—almost certainly while very inebriated—for their excellent redesign of the back-of-the-book gear reviews). It seems someone in Corporate thought letting pop singer Liz Phair have a crack at covering a NASCAR race and green tech summit that happened in the same city at OMG the same time. That’s a Hunter S. Thompson cocktail if I ever saw one.

It opens: “I’m driving through the gnarliest patch of dessert I’ve ever seen.”

It jokes: “Thank God I’m driving a Prius, I think. If I do get stranded, I can learn automotive terms in Spanish while I wait to die. Or figure out the algorithm behind the shuffle feature on my iPod.”

It personalizes: “I’ve never been to a NASCAR race. I picture a bunch of rednecks dousing themselves with beer and slapping their wives on the ass.”

Yep, so far it’s exactly the kind of copy you’d expect from a commercial pop star—vapid observation, irrelevant humor and a self-awareness of those previous qualities that nevertheless is unsuccessful at dispelling them. What we have here is an unsubtle journalistic juxtaposition: green tech and racecars, sustainability vs. the careless burning of fuel for sport, etc.

But there’s a twist!"

It takes a lot of horsepower to haul this circus from town to town.

And that means a lot of gas. An unofficial NASCAR ambassador introduces me to a company called Safety-Kleen, which comes to every event and “recaptures all the fluid that comes out of the car, including the oil.” Every bit of fluid that passes through a vehicle must be lugged in translucent jugs over to a trailer, where it is broken down until it’s no longer harmful to the environment. The guys in the pit know more about industrial cleanup programs than I do. I twirl my blond hair and hope they’ll forget which one of us is holding the microphone.

Sick of the brainiacs at NASCAR haranguing me about responsible waste management and alternative-energy sources, I head back to Greenbuild, where, eschewing further education, Kim and I take a martini-fueled ride in one of the courtesy rickshaws, snapping photos of ourselves with our legs in the air as we cruise the streets to Led Zeppelin blasting out of our cyclist’s boom box.

A day later, the prospect of driving back across the stark Mojave threatens to paralyze me. But Kim is riding with me, and the vista she sees when she looks out the window is different from the one that haunted me on the way out. “I think it’s beautiful,” she says, “I just want to run out there and keep running. I see freedom.”

What floors me is why the editors at The Atlantic let this piece run as is—basically a flakey blog post with little to no evidence of either knowledge or passion of the material at hand. Simply: “This is fun! Journalism!” That the NASCAR crews are relentlessly careful with their environmental impact is obviously an actual piece of information the discerning Atlantic reader would want to know more about. And yet it’s lip glossed over with a twirl of hair.

The genre of “I’m famous/wealthy to some degree or another so my thoughts on random topics must be newsworthy” writing is depressing and it’s not going away anytime soon. But this should have either been solely for the Web (indeed, it has an accompanying slideshow of terribly amateur photos and a “road-trip playlist” wherein you can only listen to the first 20 seconds of each track) or repackaged with some viable journalism.

Stay away from the candy, Atlantic.