The Wall Street Journal Gets Too Cute

A March 24 front-page photo and caption give a sliver of ammunition to naysayers who still believe Rupert Murdoch wants his flagship newspaper to spice things up—New York Post style. 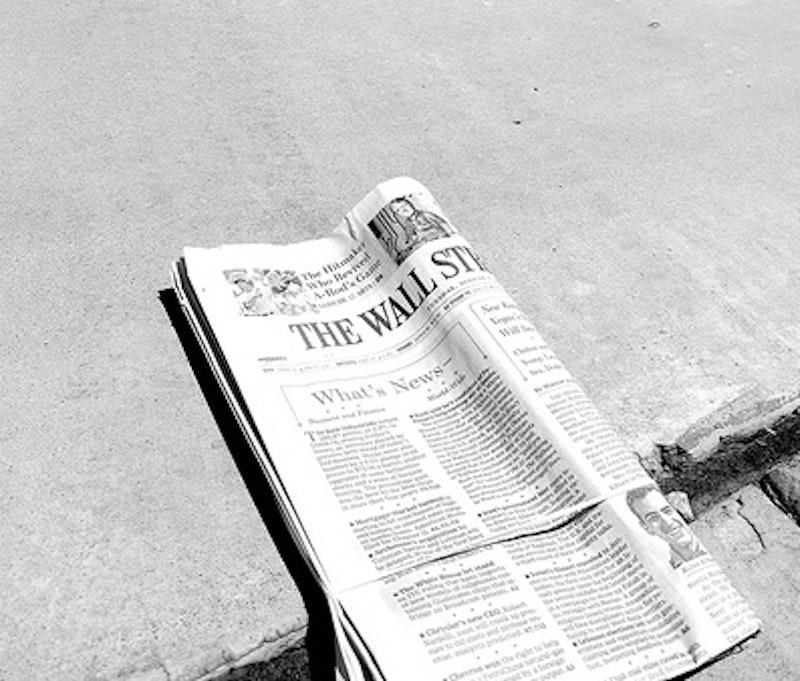 The overwhelming consensus among Americans who still read newspapers is that there are two great dailies left standing and, with apologies to the largely emasculated Washington Post, they’re easily identified as The Wall Street Journal and The New York Times. There’s an overlap, of course, as hundreds of thousands still subscribe to or buy both papers, but increasingly the lines are drawn: you’re in one camp or the other. I’m a long-standing Journal partisan—it’s the first deluge of news and opinion that I read each morning—and although the Times is still delivered to my doorstep every day, it often goes untouched, save for a scan of the front page and then my wife clipping out the crossword puzzle.

Perhaps I was late in realizing the Times’ essential subterfuge of disguising editorials as page one news stories—blame it on youth—yet it became clear in the 1988 presidential election in which the pictures of candidate George H.W. Bush were routinely unflattering and the captions and headlines about his campaign often snotty. The Times’ celebrated “Chinese Wall” between fact and opinion was/is about as sturdy as the first little pig’s house of straw. By contrast, protestations by left-wingers who reflexively trash the Journal (often without reading it) notwithstanding, that paper’s barrier more resembles the smart porker’s use of bricks in building his home.

So, I was taken aback upon looking at the March 24 front page of the Journal. No, Rupert Murdoch hadn’t, as predicted by media soothsayers when he bought Dow Jones & Co. a couple of years ago, eliminated the traditional hedcut illustrations or the offbeat “a-hed” feature on page one (although if the forever lame “Pepper & Salt” one-panel cartoon was ditched, that’d suit me fine.) It was actually worse, and I hope just a fluky aberration: Above the fold, there was a large color picture of Barack Obama, flanked by Nancy Pelosi, among other Democratic luminaries, signing the health care bill. I thought it a little odd there was no front-page story accompanying the feel-good photo (like the bill or not, it was big news), but far more egregious was the caption.
It read: “BIG DEAL: President Obama signs the hard-won health bill, as Marcelas Owens, 11, whose mother died unable to afford medical treatment, looks on. Microphones captured Vice President Biden using salty language to describe the ceremony as historic. To see what he said, turn to A4.”

The first problem I had with this treatment was the usage of “Big Deal.” Sure, an innocent could take that to mean the bill’s passage was indeed very consequential and a huge victory for the President and his Democratic allies. The more cynical, myself included, felt differently, thinking that some caption writer was letting his or her personal disappointment about the landmark legislation passing by getting cute in choosing the words. This, of course, referred to Joe Biden’s remark that the bill was “a big fucking deal,” which was caught on microphone and instantly available online not even an hour later. So even the limp joke was stale the next morning. Compounding this lapse of manners was the teaser advising readers to jump inside to see what Biden said, as if it were a reincarnation of Murdoch’s front-page New York Post WINGO! teasers in the late 70s and 80s when he owned that paper for the first time.

I should be clear in saying that this example hardly mars the Journal’s content, which is certainly the best in the nation. It’s just a little tawdry—as has been the onetime unheard of inclusion of dumb celebrity stories in the first section, such as Michael Jackson’s death and Tiger Woods’ multitude of personal transgressions. The intellectually brilliant, and often irreverent, editorial pages of the Journal overshadows, at least to the occasional or non-reader, the news reporting in the front section; but unlike the Times, whose reporters could double as opinion columnists or Obama administration pom-pom guys and gals, the Journal’s reporters don’t hew to the conservatism of the editorials and most op-ed columns (token liberal Thomas Frank excluded). Greg Hitt, for example, is one of the Journal’s political reporters and I’ve no idea from his work how he votes in elections. And no one could claim that political analyst Gerald Seib, one of the best in the nation, has a personal agenda. The same can’t be said for the Times’ Washington bureau (which hasn’t been closed—yet).

And whatever you think of Murdoch, a fair-minded person, even critic, would applaud his quixotic quest to keep print alive—the Journal’s New York City section debuts in later April, a clear dagger aimed at the Times—and save jobs in the process. It just bugs me when foolishness like the above-mentioned photo and caption are sanctioned by the paper’s front-page editors.