A Colorado ballot initiative this November could potentially threaten the freedom of all American women. 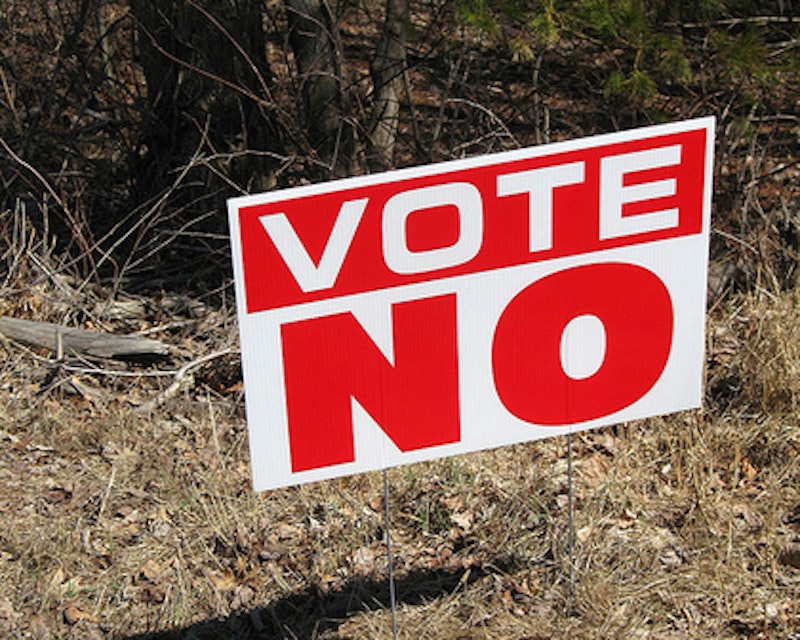 I avoid participating in pro-choice vs. pro-life debates. It’s not that I don’t have an opinion—I’m very well informed on the topic and my stance is unwaveringly strong, which is part of the problem. Abortion is just one of those fruitless arguments that feels like it can go on forever, only to end up right back at the point where it started. It’s rare when either side is capable of changing the other’s mind, and both parties are left feeling angry, frustrated and even emotionally scarred. There are just too many personal implications in the pro-choice/anti-choice conundrum. Religious and traditional values on one side, personal freedom and autonomy on the other. Ultimately, it all boils down to the question of when life begins, at birth or conception—a question that combines medical, philosophical, religious and socio-cultural imperatives, and offers no easy answers. Or at least you wouldn’t think so. Colorado seems to disagree.

As a result of a Colorado Supreme Court ruling, this November will mark the first time American voters will be asked to answer the difficult question that lies at the very heart of the pro-choice/pro-life debate. According to The Washington Post, a ballot initiative funded by the antiabortion organization, Colorado for Equal Rights, proposes that the definition of a person in the Colorado state constitution “include any human being from the moment of fertilization.” The Human Life Amendment, or personhood amendment, would thus essentially provide fertilized eggs with same rights as living and breathing American citizens. Frankly, the very notion seems completely absurd. Whether or not you fall on the “life starts at conception” side of this debate, it hardly seems reasonable to guarantee the same level of freedom and protection to an unborn, undeveloped life as you would to the human being that sustains its very existence. A fertilized egg, a fetus, is essentially a parasite, relying on its host for survival. If both parasite and host are considered human, with equal rights, then whose freedoms take precedence when the rights of one conflict with those of the other?

Despite the assertion of Kristi Burton, the ballot initiative’s sponsor, that the goal of the Human Life Amendment is not to outlaw abortion, the decision of Colorado voters will undoubtedly play a paramount role in future efforts to overturn Roe v. Wade. If the measure passes in Colorado, it will indisputably create a legal battle that will lead straight to the United States Supreme Court. The initiative has implications that extend well beyond the fight over abortion, though.

The Washington Post reports that such implications may include, “limiting medical research involving embryos, inviting intrusive government oversight of pregnancies, and banning certain contraception, including the morning-after pill and the intrauterine device, or IUD.” The amendment could also have significant legal ramifications in cases of miscarriage. Even unintentional miscarriages, if caused by smoking, drinking or participating in other potentially harmful activities while pregnant could be deemed negligence, resulting in legal consequences on top of the emotional ones that already accompany a lost pregnancy. And where do the possibilities for legal action end? If a pregnant woman gets into a car accident as a result of speeding and the impact leads to a miscarriage, could she be charged with manslaughter? If it is the baby’s father that is driving instead, does he incur the charge? And what about miscarriages that occur through no fault of the mother? Does she have to submit to testing to isolate the cause of the miscarriage? Must she prove beyond the shadow of a doubt that she did not induce the miscarriage? At what point does a fertilized egg’s right to life infringe upon a woman’s right to privacy?

It’s not just pregnant women who will be affected by this changing definition. Fertility doctors and researchers could be held legally responsible for any damage that occurs to fertilized eggs. Or perhaps the use of fertilized eggs will be halted altogether, to avoid any potential criminal charges, which would certainly have a significant impact on jobs, genetic disease research, and perhaps most importantly, fertility-challenged couples who are looking for viable alternatives to standard conception.

Ballot initiatives are nothing new. Every November uninformed voters who are mostly just looking to pick one candidate over another find themselves voting on anything from establishing a hunting season for mourning doves, to creating an amendment to the state constitution that would ban gay marriage and outlaw domestic partner benefits. But state-by-state ballot initiatives don’t receive the kind of media attention that is reserved for presidential races. A Colorado voter is more likely to know the contents of Barack Obama’s iPod than the specifics of the Human Life Amendment. Plus, ballot initiatives, particularly those with such vital impact as the personhood amendment, are purposefully vague and confusing. It’s often difficult to tell if a Yes means yes or no, and you can leave the polls feeling quite uncertain that the vote you cast was the vote you actually intended.

I don’t mean to say that the residents of Colorado aren’t capable of determining the implications of this particular initiative, and certainly no matter what vote they cast, it’s their right to do so. But a vote to decide whether or not life begins at conception is one with the potential to affect the lives of every woman in this country. I am a woman in this country and I don’t want Colorado making my choices for me. When do I get to cast my vote?