Splice's new political column looks at Chelsea Clinton's remarks that the Lewinsky scandal is none of our business. 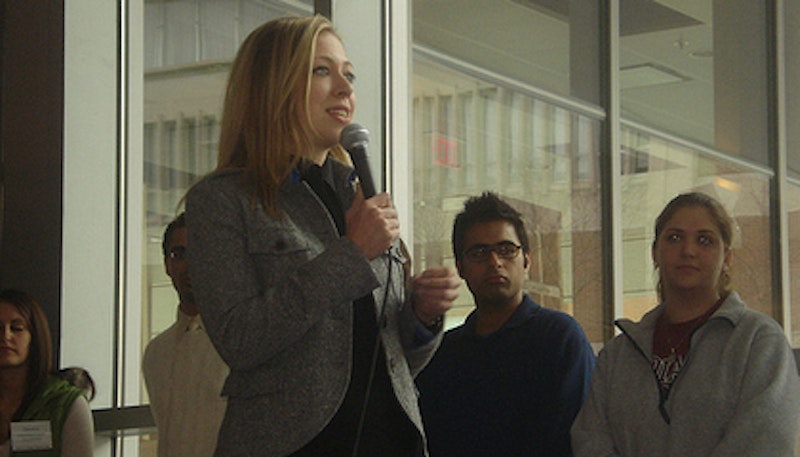 By now, almost everyone following politics has heard about the two uncomfortable encounters that Chelsea Clinton has recently experienced on the campaign trail.

The first instance was at Indianapolis’ Butler University last week as Chelsea made another of the many college campus appearances she has made on behalf of her mother, Sen. Hillary Clinton. While taking questions from the audience of college students, Chelsea was asked by Butler student Evan Strange—a Clinton supporter—whether Hillary’s handling of the Monica Lewinsky scandal that engulfed Bill Clinton’s administration had damaged her mother’s credibility.  Chelsea appeared taken aback by the question, responding: “Wow, you’re the first person actually that’s ever asked me that question in the, I don’t know maybe, 70 college   campuses I’ve now been to, and I do not think that is any of your business.”

Not surprisingly, given the media attention Strange’s question received, another college student made a similar attempt earlier this week. At North Carolina State University in Raleigh on Monday, Bryce Davis asked Miss Clinton essentially the same question. Chelsea’s response was likewise similar, dismissing Davis by telling him, “It’s none of your business.” Davis disagreed, however, and pressed on, indicating that he felt it was, in fact, his business given that Bill Clinton was President of the United States when the scandal unfolded. Chelsea was unconvinced, however, and stuck to her guns: “Well sir, I respectfully disagree. I think that is something that is personal to my family and I’m sure there are things that are personal to your family that you don’t think are anyone’s business either.”

Let me first express my sympathy for any child who has to observe significant marital problems between his or her parents, particularly when those problems involve something as painful and destructive as adultery. In many ways, I have even more sympathy for Chelsea Clinton given that she had to endure her parents’ issues along with the rest of the world.

That said, if Hillary Clinton (presumably with Bill Clinton’s knowledge and approval) is going to use her daughter as a campaign surrogate and expect her to be able to answer complex questions about the details of Hillary’s health care plan, for example, how can Chelsea not be expected to address an issue that, while undoubtedly painful and arguably private to her, was certainly not private by conventional standards? If the same parents who so admirably protected Chelsea during their White House years are now willing to use Chelsea as the political asset she appears to be, the bubble of protection that has previously surrounded her no longer applies, and therefore no question, whether it’s about health care, foreign policy, or even the Lewinsky scandal, should be off limits.

Furthermore, it’s my belief that Davis was correct. While what her father did with Lewinsky may have been “personal to [her] family” for Chelsea, he did it on government property and on government time. The American people elected Clinton to run the country, not to run around on his wife. In addition, by lying to the people (not to mention perjuring himself under oath) and by sending his wife—now presidential candidate Clinton—out to propagate that lie, Bill made it our business.

For Hillary’s part, how can she claim to have “over 16 years of experience,” thereby including her time as First Lady, but then expect that she and her campaign can pick and choose the aspects of those 16 years that they wish to be considered? In this respect, Strange was correct, because he was almost certainly referring principally to Hillary’s appearance on NBC’s The Today Show in the first days of the Lewinsky scandal. After spending the first part of her interview with Matt Lauer dodging questions and denying the accusations that her husband had engaged in and lied about an affair with Lewinsky, Hillary made the following comment: “This is—the great story here for anybody willing to find it and write about it and explain it—is this vast right-wing conspiracy that has been conspiring against my husband since the day he announced for president.”

As we now know, and as I feel certain she knew then, the allegations were true, and regardless of the existence of any “vast right-wing conspiracy,” Hillary was joining with her husband in an effort to mislead the American people to secure his (and her) political survival. How, then, can her credibility not be an issue, a question only underscored by her recent admission that she “misspoke” about landing “under sniper fire” in Bosnia in 1996?

Perhaps if Hillary (and Bill) didn’t have a consistent record of misleading statements, the questions posed to Chelsea would be irrelevant and would be “none of [our] business.” Perhaps if Hillary had said to Matt Lauer that day, “It’s none of your business,” Chelsea could now rightfully do the same. She did not, however, and Chelsea cannot either.