Still Waiting to Legalize It

A Congressman recently committed to decriminalizing marijuana. Is the promised land finally here? From The Orion. 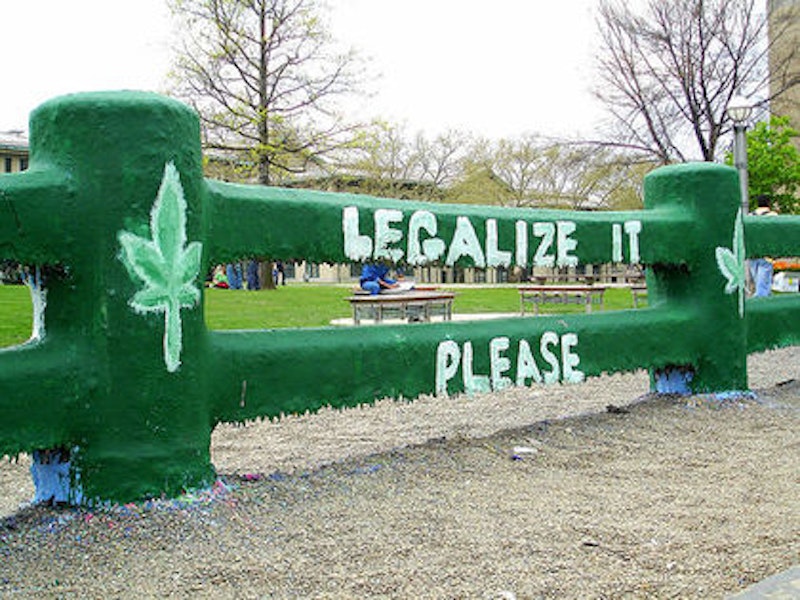 It's been the motto for potheads, Rastafarians and even the most casual marijuana smoker for decades.

Finally in 2008, Congressional Representative Barney Frank (D-Mass.) said he plans to propose a bill that would "remove all federal penalties for the personal use [and] possession of small amounts of marijuana," on the March 21 episode of HBO's "Real Time with Bill Maher."

The specifics are vague as to what the heck "small amounts" means but, based on current precedent of state marijuana laws, it probably means less than an ounce of weed.

Frank quipped the federal marijuana decriminalization bill should actually be called the "make room for the serious criminals bill."

If caught with less than 1 ounce of marijuana it's possible to be charged with a misdemeanor and pay a $100 fine. "Criminals" possessing more than an ounce of weed, could see up to six months in jail and a $500 fine, though most of the time they are allowed to enter treatment programs.

The biggest penalties are for those who cultivate marijuana or those who are found guilty of "possession with an intent to sell." If convicted, it's possible to spend up to 20 years in jail depending on the circumstances.

According to 2006 FBI statistics, 738,915 Americans were arrested and charged with only marijuana possession. Frank's bill intends to eliminate these types of arrests and potential convictions.

The problem is this is not the time to introduce such a bill to Congress. Even if it passes, which it won't, President George W. Bush would likely veto it.

Believe it or not, 31 years ago, President Jimmy Carter supported the decimalization of possessing 1 ounce or less of marijuana nationwide, much like Frank's bill proposes to do.

I guess at bare minimum, this bill will allow Americans to discuss the marijuana issue that has been hidden from national discussion for many years. Let's hope we can discuss this issue as adults.

A lot of stereotypes surround marijuana and its users, and I can already hear the echoes from Capitol Hill as legislators cite obscure individual cases of "crazed criminals" entering into a state of "reefer madness" that lead to criminal activity.

It's all a bunch of fear mongering but it usually works against cowardly legislators who are afraid to look at the issue in a mature manner.

Marijuana is a drug, and like any other drug, prescription or otherwise, it can be abused. In some people it can lead to weird side effects. Many cancer and AIDS patients find it a better alternative to addictive pain relievers such as Vicodin and OxyContin.

Other people use marijuana much like many people recreationally use Budweiser, vodka or tequila to get an enjoyable buzz after a long day. Marijuana use can become habitual, but so can over-the-counter sleep aids.

These types of drugs should remain out of the hands of minors much like when we limit consumption of tobacco and alcohol. Studies show smoking pot during adolescence can stunt the growth of the frontal lobe of a developing brain.

But once the body stops growing at about age 18, using marijuana should be a choice for adults.

It's also important to realize marijuana is already everywhere. It's right here in Chico, probably hidden away in small little Ziplocs in hundreds of dressers and desk drawers throughout town.

Sure, we can giggle about all the funny side effects of marijuana such as the munchies, feeling "floaty" and how it makes "Chapelle's Show" seem like modern day Shakespeare, but when it comes to addressing something that has led to significant fines and imprisonment for thousands of Americans, the discussion should be a serious one.