Money does interesting things at the Carson campaign. 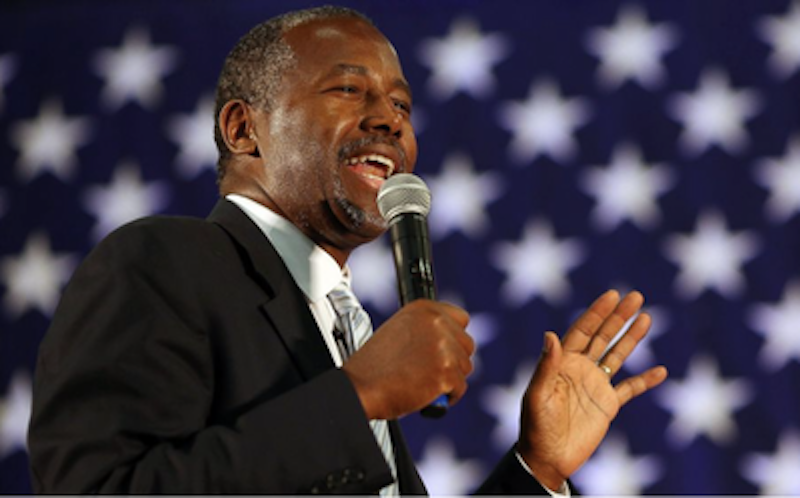 Wave Ben Carson before the public and you can collect $43 million in six months. That’s how the Ben Carson presidential campaign spent the second half of 2015. Most of the money came from small-timers, regular citizens; for example, during October through December about 60 percent was from people giving $200 or less. We also know that the money stuck with the people collecting it. For July through September, we have a figure of $11.2 million “being plowed right back into fundraising costs” (to quote The Atlantic). That’s out of $20.8 million raised. For every dollar given by a poor sap of a Carson fan, 54 cents stayed with the operatives raising the money.

I always wondered if Carson saw something wrong in this. It looks like he doesn’t. I draw that conclusion for an oblique reason. The Carson campaign just said goodbye to its national finance chairman, who resigned the same morning that Politico posted an article about the chairman’s “unnecessary expenses” and his generosity with “consulting fees to an inexperienced staff.” When Carson was riding high, Politico egged itself by running a hit piece that flopped. (Politico thought an email from the campaign said Carson had made up a story regarding his past; the campaign maintained plausibly that the email said no such thing.) Carson held a press conference where he trampled on the media’s face. But this time, I guess, the reporters hit the mark. Politico says Carson has his eye on a replacement for the finance chair, this replacement being Mike Murray, “the mastermind behind the retired neurosurgeon's expensive but lucrative direct-mail fundraising operation.” That’s the man behind the campaign’s 54-cents approach to fund-raising. Of the $11 million spent on fund-raising in the third quarter, about $5.5 million went to what Politico calls “Murray-linked companies,” notably $1.3 million to TMA Direct, which Murray owns, and $4 million to Eleventy Marketing, which has TMA as a client.

Murray and Carson hooked up in 2013. Carson had just scored at the National Prayer Breakfast, where he made Barack Obama listen to the doctor’s thoughts about liberalism and the decline of America. The Washington Post takes up the story. Murray “knocked on the door of Carson’s new retirement home in Florida. Carson answered the door in shorts and a T-shirt.” Murray gave Carson a three-hours sales talk about spearheading resistance to Obama’s socialized-medicine power grab. The Post makes it sound like Carson, in his shorts, had to be talked into a leadership role. My guess is that, no, he was already keen on going big-time, and that Murray was there to sell his services as vehicle. I base this on viewing clips of Carson’s prayer breakfast remarks and his follow-up performances in conservative media.

At any rate, the two men launched Save Our Healthcare. The campaign featured Carson as its public face and was managed by a political action committee that Murray had started a few years before. The PAC is known as American Legacy and was co-founded by Newt Gingrich. Sounding demure, Politico says, “The PAC has taken criticism for raising millions but reportedly spending little to boost the anti-Obamacare candidates it was purportedly designed to help.”

Save Our Healthcare is proof that Murray and Carson began hunting for Carson-friendly small donors in 2013. In theory Murray’s approach to raising donations gets cheaper as it goes along. The operation collects names of people who are willing to give, and then it keeps going back to those people. But as of fall 2015, after two-and-a half years of prospecting, the operation still cost 54 cents on the dollar. Getting cheaper doesn’t seem to be the point here.

The fellow who’s getting pushed out, the man who is no longer finance chairman, is most likely not at all honest. He expensed $216,000 in the third quarter, and a company he owns collected $145,000 from the campaign for “travel.” Just before his exit, he was paying himself $20,000 a month in salary; usually a finance chairman isn’t paid anything. Also, the man had the people on his team register as limited liability corporations so he could pay them consulting fees and not salaries. Politico says this move makes the workings of his operation “difficult to decipher from campaign filings.”

But the money involved is less than the $1.3 million that went to Mike Murray’s TMA Direct, not to mention the money going to other Murray entities. Politico says “some campaign insiders” told it about the ex-chairman’s expenses and mysterious consulting fees. Therefore, the article that triggered the poor man’s departure was the campaign insiders talking to themselves. I’m guessing one of them was Mike Murray, and that Carson likes Murray because they’re in business together. The ex-chairman can get the ax for his squishy $216,000 in expenses. Murray still collects his 54 cents on the dollar. My guess is that Carson gets some of it too.