Populists may yet win. 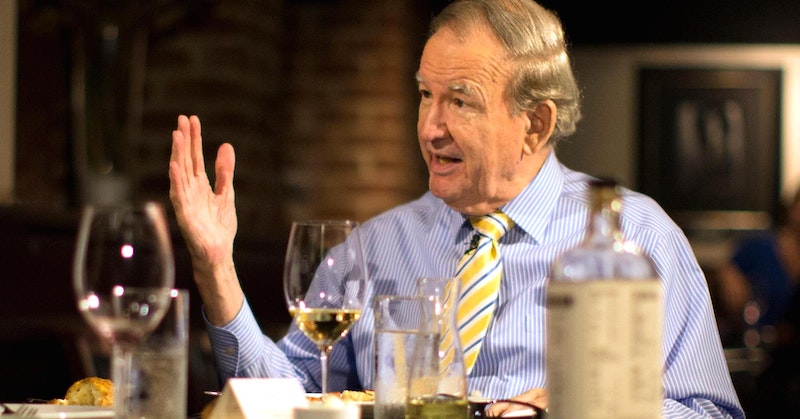 Pat Buchanan must be a very happy man these days. There should be a 24-hour live-cam on him, like the popular ones online showing bears hunting salmon and Animal Planet kittens romping, so we don’t miss the moment if he goes into a victory dance.

After he spent the 1990s futilely pushing the Republican Party away from capitalism toward populism—wanting the borders closed to trade and immigrants, fewer wars, and a reversal of p.c. trends in culture—there’s a very good chance he’ll get all he dreamt of in the form of Donald Trump’s nomination. Given the chronic amnesia of the public, we’ll experience the quick fading away of decades’ worth of more fully conservative and libertarian modes of discourse soon afterwards.

Meanwhile, the closest thing to vitality in the Democratic debates is Bernie Sanders criticizing Hillary Clinton for taking donations from Wall Street and not doing enough to combat income inequality, a scuffle that may also please Buchanan. He loves the Wall Street-vs.-Main Street meme and talk of the “pitchfork brigades” coming to rout the elites.

Intellectual humility forbids me to engage in optimism about these things (whereas most pundits chronically talk as if the public must be on the verge of swinging around to some version of their own point of view). I’d love it if “trump” became a verb meaning “to snarl irrationally at politically foes,” but within months I imagine it’ll more likely be used as a noun meaning “a perfectly typical know-nothing non-Democrat.”

You know I’ve ditched optimism once I start talking about fallback primary candidates. I recall briefly rooting for Mitt Romney in the 2008 primaries when it became clear he was, so to speak, the only remaining obstacle large enough to hurl in John McCain’s path to the nomination. You see how that worked out. Now I sincerely hope Ted Cruz beats Trump in a couple of early primaries, before it’s too late.

In that hope, I may be guilty of indulging a chronic mindset we might call homeopathic politics—the irrational pretense that a tiny resonance of whatever original political hopes you had somehow remains in the awful real-world electoral outcome that ensues, a precious residuum to be celebrated since still-greater horrors were at least averted. I hope I don’t have to watch months of once-respectable establishment Republicans holding their noses and convincing themselves that Trump isn’t so bad after all because, hey, he’s not Hillary, etc. (this is the end, conservatives and libertarians—admit it, if you ever really gave a damn about these philosophies).

And yet I can’t blame the populists for seeing themselves as the long-suppressed heroes in all this. Look at the Republican response speech after the State of the Union address, for example. No, not the much-debated Nikki Haley speech but the Spanish-language translation of it released at the same time. While mainstream Republicans talked about border security in English, their Spanish-speaking spokesman talked in subtly different phrases about bringing people “out of the shadows” by reforms that would address their legal status. Hmmm. That doesn’t seem to be what the rest of us heard.

I’m pro-immigration, but can you blame populist Republicans for feeling as if they’re being sold out, and as if their party deserves to be trumped? It’s tragic that something as divisive and complex as immigration has become the litmus test for authenticity, just as it’s unfortunate Arizona keeps being the place where these issues get fought out in crazy fashion, but these are the fruits of hypocrisy and evasion.

Perhaps I should never have hoped things would work out any better. Democracy, markets, biology—they’re all more or less filters for weeding out things people don’t want, no matter how awesome they are, and for streamlining people’s access to the things they do want, no matter how terrible they are. Maybe there can be no happy ending for the human race, not with its usual desires.

My nihilistic consolation in the days ahead, especially if they bring Trump vs. Sanders, will just be knowing how much upset is being caused to many pretentious rich jerks who think, say, their taste in cheeses is inherently superior to the masses’ taste in cheeses. The way things are going, that might even become a campaign theme one day. And Buchanan will smile that tight, sinister smile and chuckle and chuckle. You can’t help being sort of happy for him, even if you feel sorry for the salmon.