Many jobs survived, but much labor now seems stupid. 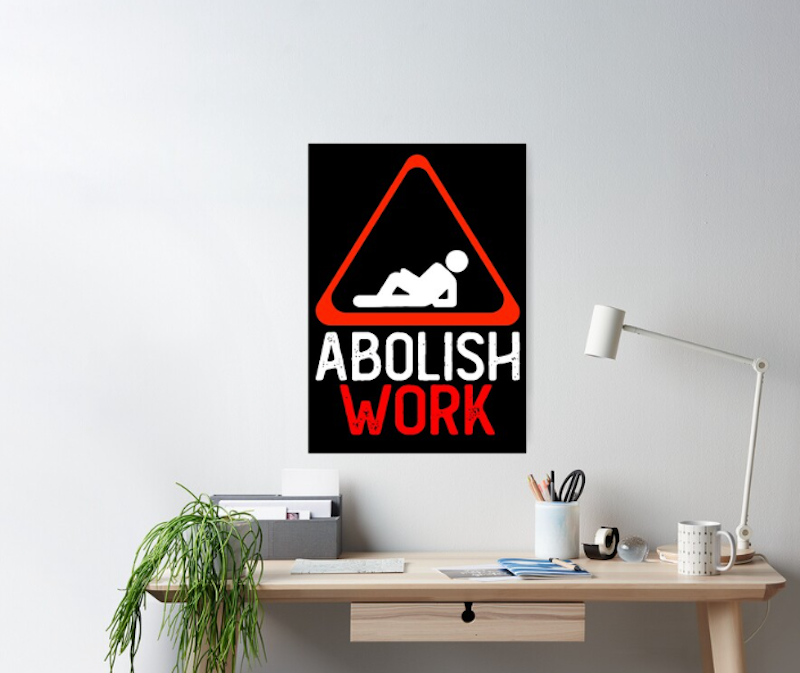 You may only want a quiet Labor Day weekend, but there’s reportedly now an “anti-work” movement of people who concluded during the recent plague that they’re just over it all and aren’t going back to the office—nor planning to work from home nor anything else. I’m not sure where the money to support themselves will come from, just as I wasn’t sure what the long-term plan was decades ago when I spoke to “anti-work anarchist” Bob Black (not to be confused with the younger pot legalization activist by the same name, I swear).

Most likely, all the anti-work people, old and new, will gravitate sooner or later toward some sort of socialist philosophy that dictates that work will, in fact, have to be done but mostly by someone else, preferably rich people.

I found myself in a brief Twitter argument recently with some bunch of Marxists who are convinced that working for an employer is “wage slavery”—and don’t bother telling them this is an insult to actual slaves, who never had the chance to shop around for the best wage or argue about contract details. If you try to tell them that, they’ll punt to complaining about prison labor, suggesting it’s somehow pivotal to the entire American industrial system, morally tainting it all, even your cushy interior design gig.

(Putting any kind of added pressure on already-imprisoned people is morally dubious, but some of the noblest prison reform ideas have involved offering prisoners at least the option of doing labor to get skills that will be useful when they’re back on the outside, easing them into healthier habits.)

Economic theory notwithstanding, I found myself agreeing with this much in what Bob Black said years ago: If you can achieve your goals with very little work, surely that’s better than lots of pointless extra effort. Industrial society isn’t supposed to be masochism, regardless of some of Ayn Rand’s naughtier fantasies. Industrial society is supposed to be efficient, and getting more for less is efficient. Calling it laziness doesn’t make it wrong.

The dangerous—or maybe wonderful and liberating?—thing about the plague of the past two years is that it severed for many people what little sense remained that there’s some predictable connection between effort and earning, between slacking and strife. Instead, it feels as if we now live in a world where your business thrives if it happens to be delivery-based, vanishes if it’s near a germophobic legislature, gets a bailout if it’s on Main Street or was heavily dependent on student loans, etc. Total unpredictable amoral chaos, in other words.

That sense that there no longer is sense in the economy, akin to a wave of people who gave up on investing after the Financial Crisis and bailouts of 2008, is surely leading billions of people to look around for options other than returning to the old grindstone. I don’t know if they’ll find any. Maybe the robots will take over. Maybe there’ll be a few months of widely celebrated communism, followed by mass starvation. We’ll see.

Plague coordinator Dr. Fauci’s job is apparently ending this year, at least—and on cue, it sounds as though the establishment is shifting toward saying that maybe he and the vaccine did sometimes do harm but that whatever harm there may have been in the heavy-handed Covid response was all Trump’s fault, whereas now we’re out of the crisis, so please vote Democrat in 2022 and then do so again in 2024.

The liberal establishment has concluded, I think, that it has milked people’s paranoia for so long that we must now swing back to assuring the masses their jobs and investments will endure. Sooner or later, the basic needs reassert themselves, whereas panicking about mild diseases is a luxury. A Beverly Hills boutique in the news is a good indicator of the shift: It has been honest enough about risks to ban Covid masks because, like all masks, they make robbery easier, and people are starting to worry about old-fashioned things like robbery and violence again.

A shift back to worrying about, so to speak, jobs instead of germs will come too late for many to get back on their feet economically, whatever you may think about the wisdom of the semi-mandatory economic contraction/shutdown aimed at minimizing plague effects over the past two years. New York City’s Mayor Eric Adams fired some 1800 City workers for failure to get vaccinated, though I won’t waste too much time weeping for government employees when there should be no government at all.

I’m somewhat more moved by the plight of healthcare workers who quit en masse rather than get vaccinated, especially since one can’t help worrying, no matter how mainstream one’s opinions on science and disease, that they may know things. One needn’t go so far as believing like anti-vaccine activist Steve Kirsch that the vaccines are the main cause of illness in all this.

But it’s fair to suspect there is at least a tragic and disturbing labor problem at work in our recent societal near-collapse: Designating deaths as Covid-caused surely sometimes provided a convenient scapegoat for deaths caused by hospital understaffing, a labor shortage that was widely regarded as a crisis even before Covid arrived. Label new arrivals DOA to avoid checking on them for hours and you can dodge a lot of lawsuits, or so some nurses I know worry.

And all the while, despite all the crisis talk foisted on the public, all the old bureaucratic rules stayed in place, like strict limits on the ability of medical professionals to travel from state to state as needed, with the hospital bureaucracies and well-funded public relations departments never mentioning their own culpability in it all.

I hope we’re getting better. I wouldn’t blame you, though, for lingering in bed awhile before heading back to the factory, even if only as part of a long, collective mental health day.