Conversion Therapy is Beyond Barbaric

Evangelicals have the blood of LGBTQ kids on their hands. 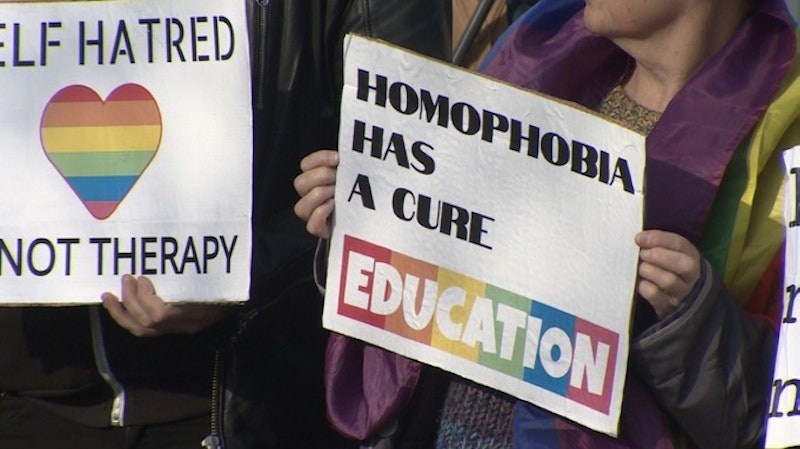 Utah’s become the latest state to outlaw conversion therapy for minors. The conservative state is now the 19th to officially ban the practice, joining others like Maryland, Massachusetts, Oregon, and California. Troy Williams, executive director of the LGBTQ rights organization Equality Utah, thanked Utah governor Gary Herbert in a press conference, saying, “He saw how polarizing this was becoming, and he made the decision to allow science to prevail over politics. He kept his word to the LGBTQ community, and we are deeply grateful to him.”

The Mormon Church, which has a long history of being anti-LGBTQ, backed the bill after many conversations with Equality Utah. “The church welcomed our request to discuss conversion therapy,” Williams told The Daily Beast, “and we quickly found that we had a major area of agreement: we don’t want young people harmed. And that became our focus.”

It was looking great until Rep. Karianne Lisonbee introduced a substitute bill that removed references to gender identity from HB399. Sexual orientation was still protected under Lisonbee’s bill, but removing gender identity meant, if passed, transgender kids would still be subjected to conversion therapy.

According to Williams, Lisonbee drafted the bill after working with the anti-LGBTQ organization Alliance for Therapeutic Choice, led by the former director of the National Association for Research & Therapy of Homosexuality. Lisonbee said she “actively sought out therapists who were neutral on the issue,” but this is the same person who once blamed teen suicide on “living a homosexual lifestyle,” so her claims of objectivity fall flat.

Finally after Gov. Herbert asked regulators in June to look into conversion therapy and maybe propose rules for it, it’s now banned in the state. This new rule applies only to state-licensed therapists; members of the clergy and religious counselors in a “religious capacity” setting are exempt. It’s still a win for LGBTQ rights because countless studies show that conversion therapy is dangerous pseudoscience. A 2018 study from San Francisco State University found that LGBTQ youth who go through conversion therapy are twice as likely to struggle with depression and attempt suicide than those who’ve never gone through the ordeal.

Bowen Yang of SNL recently opened up about his own experiences with conversion therapy as a teenager in a New York Times interview. It was just talk therapy for him, but throughout history barbaric techniques such as inducing nausea, electroshock therapy, and shaming have been used to turn people straight. Ever mainstream medical and psychological association rejects conversion therapy, but many conservative Christians still believe that being queer or trans is a “choice,” and the right kind of conditioning can fix it. They’d rather cling onto outdated ideas from ancient texts than embrace reality, and the result is dead LGBTQ kids.