It’s unlikely he can resurrect the Democrats for November, but the media’s doing the best it can. 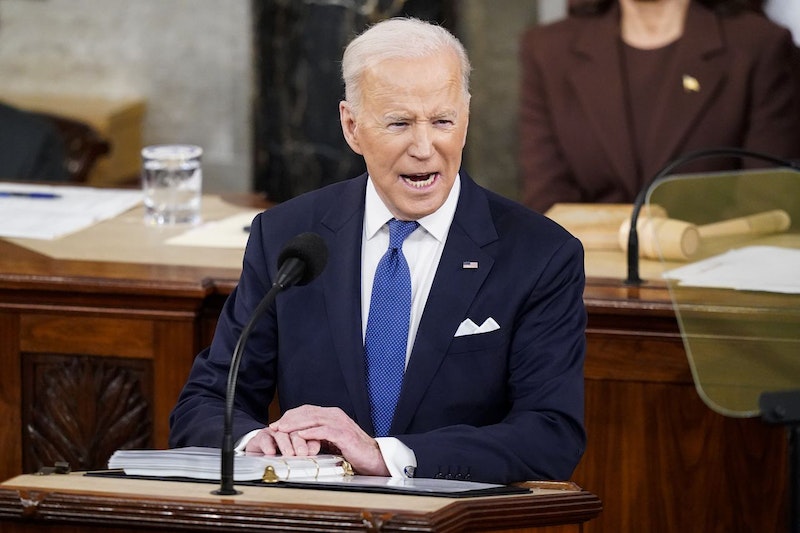 Last weekend, a close friend and I had a lengthy discussion about Joe Biden and his probable midterm loss in November. (As well as the impossibility of figuring out what’s going on Ukraine, since no source can be credibly believed; you can look at social media all day and come up with 15 different conclusions, most of them worth nothing). So far, it’s hard to fault Biden’s practical approach to Putin’s invasion and shelling of Ukrainian cities; fortunately, he’s ignored the chorus of nutty Republicans like Rep. Adam Kinzinger and Sen. Roger Wicker who say that Biden’s administration ought to be more aggressive than just levying economic sanctions against Russia, and proceed with a no-fly zone, which would drag the United States into the war. For the sake of NATO, democracy and all that’s moral, it goes without saying. Other fringe Republicans are just as ridiculous, such as the sure-to-lose-his-seat Rep. Madison Cawthorn (NC), who blathers to anyone who’s listening an inarticulate stream of anti-Ukrainian invective. The rhetoric is insane: Democrats calling for Fox’s Tucker Carlson to be tried as a “war criminal” and Sen. Mitt Romney and Tulsi Gabbard labeling each other traitors. (There are no “good guys” in this war; most countries are corrupt, including the U.S., from the low-rung City Council members across the country to the lawmakers in Washington.)

Professional #NeverTrumper Max Boot, a commentator/author I haven’t agreed with in years, made sense in The Washington Post: “The only sensible way out is to accept defeat while calling it a victory. Luckily for [Putin], he’s a practiced prevaricator. The big danger is that Putin might not be entirely rational when it comes to Ukraine.”

My friend and I disagreed about the political ramifications of the U.S. entering the war if it drags on and on. (One hopes Biden doesn’t lose his bearing at the upcoming NATO conference.) He reasons that Biden’s standing is so low that a traditional “Rally ‘round the flag” sentiment—should the U.S heed Zelensky’s plea—will help shaky House and Senate Democrats at the polls. Could be—wars have unpredictable consequences for elected officials—but I doubt it. By the fall, the American economy will likely be worse, and still-exorbitant gas, food and retail prices will, I’m sure, best any patriotic notions about a war in which no Americans are drafted. And, as many have correctly pointed out, probably 90 percent of citizens here can’t locate Ukraine on a map, and a lesser number never even knew much about the country to begin with or Putin’s designs on it.

(Before it slips my mind: conservatives who blast Biden for spending weekends at Camp David or at his Delaware home are out of their minds, or just trying to cause trouble. I happen to think Biden’s best cognitive years—to be delicate—are gone, but obviously both locations to where he retreats are fully outfitted with necessary information on all geopolitical and domestic fronts, and his rag-tag team of advisers have easy access to the President.)

Liberal media outlets, after a drawn-out J6 commemoration, and then some all-in-fun (trying on objectivity) kicking around of Biden, his chief-of-staff Ron Klain, Kamala Harris and Nancy Pelosi, have now decided it’s time to prop up Biden, lest America becomes a “fascist” country in November. The worst offender, by far—at least in the last week—was the slipshod Politico, which ran an advertisement for Biden and Democrats on March 13. The hyperbolic story by Laura Barron-Lopez and Christopher Cadelago was strange: it read like a 90-percent completed obituary of Biden (obviously, all newspapers have that one in the can), by giving a weird summation of his lengthy Congressional and Oval Office career. It begins: “Joe Biden is trying to get a historic Supreme Court Justice nomination confirmed while managing the worst military crisis in Europe since World War II. Those around him say he’s more at ease than at other points during his presidency. His Senate tenure, they add, is the reason why.”

Some may argue, convincingly, that Biden’s “tenure” (he was elected in 1972) is a problem, that he’s out-of-touch in the 21st century and relying on old allies and former staffers as yes-men, some whom are older than the President himself. Senate Minority Leader Mitch McConnell (as I’ve noted before, a hack who’s enriched himself over his own long career, but nonetheless the smartest political tactician since LBJ) has all but guaranteed Judge Ketanji Brown Jackson’s ascension to the Court, since the 6-3 putative conservative majority will remain intact and the GOP doesn’t want voters to resent opposition to SCOTUS’ first black woman. (I can’t fault Biden for his choice: one of his pledges in the Covid-tinged 2020 presidential election was that he’d nominate a black woman. Biden will likely go down in history as an also-ran, a Jimmy Carter, but he kept his word on the nomination, and that’s not insignificant.)

The Politico story’s larded with glowing quotes from Democrats (aside from homespun contrarian former GOP Sen. Alan Simpson, who’s now 90), and none is worse Sen. Chris Murphy (D-CT): “This is the moment that Americans were thinking of when they decided to put [Biden] in the White House and he’s met and exceeded their expectations… This is why you put somebody with his kind of experience [128 years on the Foreign Intelligence Committee] in the White House because he’s gonna know what to do at a moment like this.” Is Murphy a dolt or a just an unskilled suck-up? Of those who voted for Biden, maybe two percent envisioned a foreign crisis like Putin’s power grab, and, in any case, to the extent that Americans are following the war, aside from telling everyone who’ll listen #IStandWithUkraine, the conflict (my own pessimism) has no immediate end in sight.

Jonathan Martin’s March 12 article in The New York Times wasn’t a puff piece on Biden, in contrast to Politico, but rather a primer, as suggested by numerous Democratic officials, on how to avoid a midterm disaster. This was odd: Martin baldly contradicted himself, and perhaps the story escaped editing. At the start, he writes: “Mr. Biden is now absorbed by the war in Europe. Facing the biggest foreign policy crisis of his presidency, he is hardly consumed with the looming midterm elections.” Later in the story: “Mr. Biden’s midterm priorities aren’t taking a back seat to the war in Ukraine, the White House insists.” It’s confusing, but the latter is more convincing: even a diminished Biden can think about two issues at once.

Many Republicans haven’t acquitted themselves well this year (especially those who are sticking with Donald Trump as putative Party Leader, complete suicide, I think), which worries the GOP’s more sensible lawmakers who don’t want to blow a chance to take back the House and perhaps the Senate. Fortunately for them, the battle between Democratic “progressives” and moderates, looks bloodier. For example, as Martin notes, Georgia’s new Sen. Raphael Warnock wants Biden to cancel student debt. Still. “Good policy, smart politics,” chimed in Sen. Elizabeth Warren. That’s a policy that’s sure to sow a class war between Democratic voters who didn’t go to college (or paid their tuition) and those who want a government handout.

The real question in the news-changes-every-day environment is which political party fucks up worse.