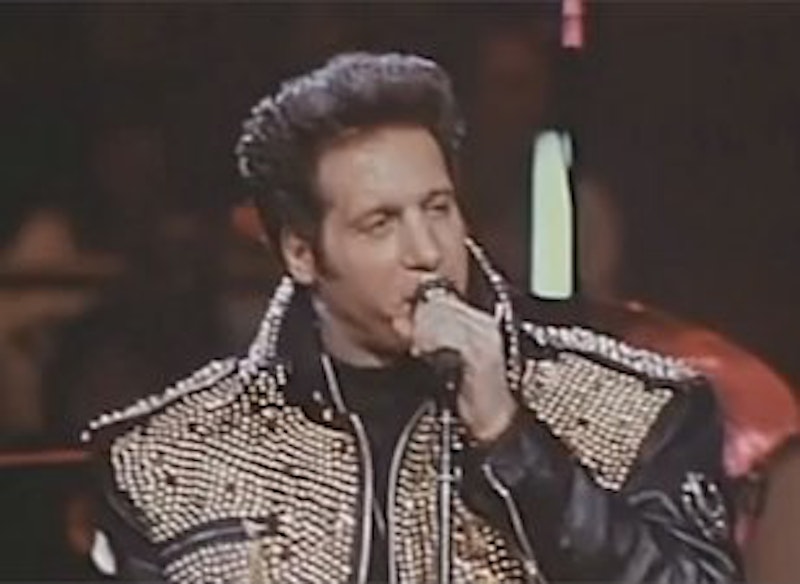 If you saw Bradley Cooper's A Star Is Born, you probably noticed a solid performance from the actor who played the doting father of Lady Gaga’s character. But even if you remember him, you probably didn't recognize the first comedian ever to sell out Madison Square Garden, which he did in February, 1990 for two nights in a row. Three decades ago, Andrew "Dice" Clay, born Andrew Clay Silverstein, was the biggest comic in the world for the shortest time ever.

By the time the now 61-year-old comic who'd come to be known as Diceman packed the house at MSG, he was already well on his way to having an episode of E! True Hollywood Story dedicated to his fall. In 1989, Clay became the first person to get banned by MTV the previous year. The network honchos apparently didn't dig the jokes about "banging fat girls." His act, built around misogyny, racism, and a gay-unfriendly macho pose, just wasn't built to last. Thinking back on it today, it's hard to believe the act ever existed, much less at the highest level of the business.

In his early stand-up days in New York comedy clubs, Clay carved out a comedy niche of misogynistic humor, which got plenty of laughs from women. In 1980, he moved to Los Angeles, where he caught the eye of Comedy Store owner Mitzi Shore, who gave the budding comic, a Brooklyn Jew, an opportunity to work on his metamorphosis into the Italian "Diceman" persona with the street-tough voice and cock-of-the-walk attitude. He became the "Guido" type that Manhattanites deride for their weekly Saturday night incursions into their island from outposts like Bayonne and Newark. Diceman's mentality was blue-collar all the way. His physical presentation was based on the garish stage costume of Elvis Presley, which suited his total lack of subtlety.

Clay's act caught on. The 1988 HBO special, The Diceman Cometh, placed his lewd, rude, and crude humor at the top rung of the comedy ladder. The demand for his performances would soon outnumber the available dates, which were all in large venues.

Clay became only the second man, after George Burns, to be on the cover of Penthouse magazine. He ramped up his raunch with each performance, but that's not what threatened to topple him from his perch. When feminist attorney Gloria Allred said of Diceman's comedy, "It's hate speech disguised as comedy," she was signalling the trouble that was on the way for the comic whose performances had become chock-full of scathing slurs against women, dwarves, Latinos, Pakistanis, beggars, paraplegics, Asians, and other minorities with "urine-colored" complexions "wearing their laundry on their head."

Gays, women's groups, and the media began pushing back against Diceman. The New York Times compared his act to a Nazi rally. 60 Minutes and Newsweek warned about the danger he presented to society. Picketers demonstrated, feminist activists defaced his billboards, and a boycott movement formed.

Jokes like this one, aimed at gays, agitated people: "They're on TV every day, ‘We want our rights, we want our rights!’ I'll give them their rights—10 percent off Vaseline, now get back in your closet!" Or this one: "I don't see many faggots in Philly. In Brooklyn we don't have any gay people. They're all dead. We got a sign that says 'Welcome to Brooklyn' with a dead fag hanging off of it."

Women were "sluts" and "pigs" to be used and discarded. "Here's my idea of a perfect date in Philadelphia: Uh! [feigns orgasm] Get out." As for "slanty-eyed" Asians: "Japs, chinks, they're all the same."

On July 10, 1990, the day before his movie Ford Fairlane was opening, Clay was near tears on The Arsenio Hill Show as he discussed his controversy. The film bombed after a decent first week. His manager would soon drop him, and Fox bought out the remainder of his contract. The fleeting Diceman juggernaut was over, and now he's essentially been written out of comic history to the point where he can have a significant role in a major motion picture and nobody recognizes him. He's continued to work, however. Clay appeared in Woody Allen‘s Blue Jasmine and Martin Scorsese‘s Vinyl, and he had a Showtime series starting in 2015 that ran for two seasons.

Diceman's cringeworthy, low humor relied too heavily on shock value. It was a mean-spirited novelty act designed to appeal to the worst instincts of ignorant white people. Norman Lear explored similar territory with his groundbreaking 1970s sitcom, All In The Family, but he had the intelligence to temper Archie's bigotry with a liberal son-in-law and a ditzy wife. The show made people think about bigotry and various social issues, but nobody was thinking at a Diceman show.

Thoughtful comedians dealing with sensitive topics don't want every laugh they get. They distinguish between good laughs and bad laughs. Andrew Dice Clay made no such distinction. He got mostly bad laughs that were at the expense of others, but he didn't care. Diceman was working a financially successful, artistically bankrupt high-wire act, but he wasn't reflective enough to figure out how to keep it from crashing to the ground.